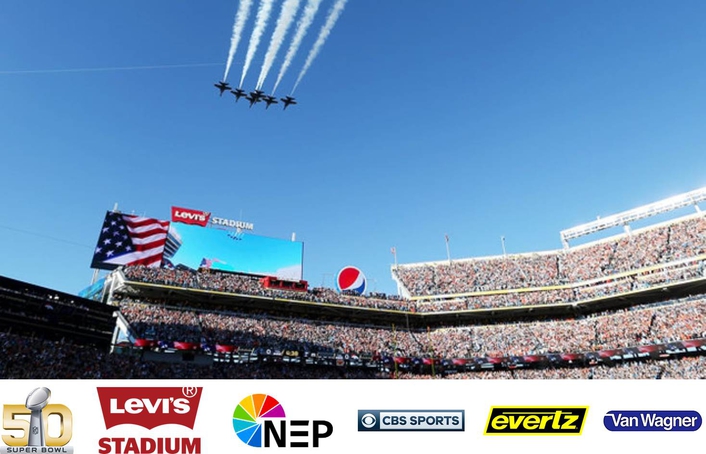 As Super Bowl fervor crescendos in the Bay Area, the San Francisco 49ers’ production team has been hard at work behind the scenes, prepping the Levi’s Stadium control room to handle the big game. And to ensure that its video workflow is up to the task, the 49ers turned to Evertz to build out an IP infrastructure.

Levi’s Stadium opened its doors in 2014 with a state-of-the-art control room featuring an Evertz EQX router and five DreamCatcher systems: three DC-428 servers for live-production replay, a DC-118 for production playout, and a DC-LOGGER for content management.

For Super Bowl 50 CBS operated out of the NEP SSCBS four-trailer production unit — which made headlines at its launch last year for embracing IP-based routing — and the 49ers were interested in adding an IP layer to the control room to accommodate additional 4K and 1080 feeds from the truck.

“At NAB last year, we started talking about this, and, of course, my mind was in the video-over-IP world because of the density of what you can do over normal fiber,” says Aron Kennedy, director of game-day production and broadcast operations, San Francisco 49ers. “My vision was to take Evertz’s IPX router and stream all of this content up from the network truck [as well as] push my 4K cameras down to the truck if they wanted them. … From that IPX router, we would introduce those 4K signals into our EQX router, and then we would basically be tapping into our current infrastructure.”

To turn Kennedy’s vision into reality, Evertz allocated 20 ports of SSCBS’s EXE router and tied them into a 64-port IPX router in the control room, with a VIP10G uncompressed IP multiviewer to monitor the tie lines. Modular IP gateways (570IPG) were added to SSCBS’s EXE-VSR packet switch to distribute 3G/HD content throughout the truck compound.
“When approaching a massive project like this, it is essential to work in an IP-based environment,” notes Mark Vinten, senior sales manager, Evertz. “Designing this IP layer for the Super Bowl with Aron was more of an exercise in bandwidth requirements than SDI-port counts.” 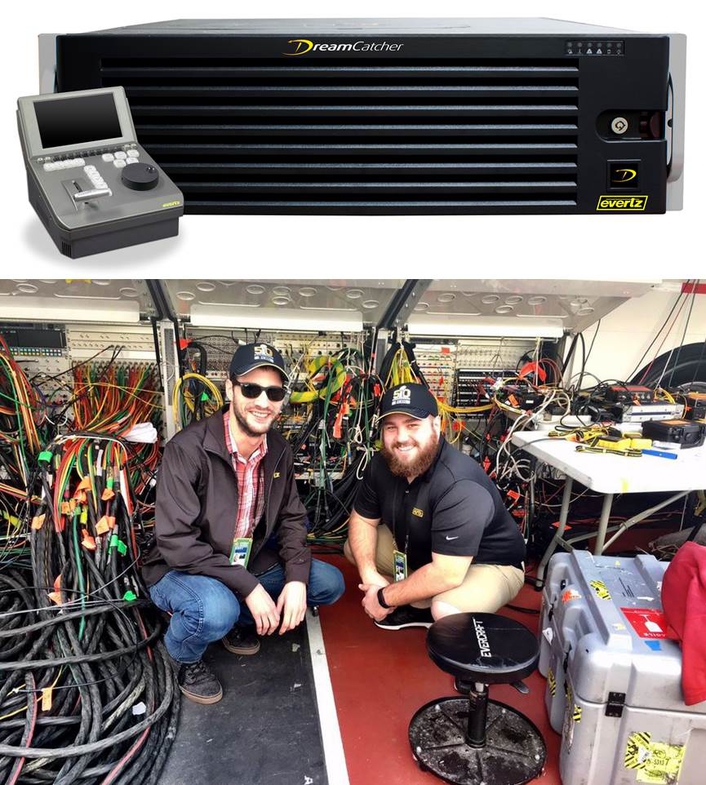 Evertz added a high-capacity switch fabric (3080IPX) and IP media gateway modules (EQX-IPG) into the existing EQX router at Levi’s Stadium. With MAGNUM SDVN control software added, operators will be able to route the incoming IP signals from SSCBS’s EXE over the 3080IPX to the EQX-IPG modules in the EQX. In addition, Evertz joined forces with the 49ers to create a hybrid IP/SDI video-routing solution with the addition of EQX-IPG cards.

“We’re still going to connect the two worlds — HD-SDI is the primary layer here — so that we can always accommodate any network that comes in, because not many networks are going to have this new IPX routing and IP video,” Kennedy explains. “But, with CBS rolling out this truck, it was the perfect time to launch this whole thing. It’s the biggest event in sports; it’s a huge opportunity for Levi’s Stadium and the 49ers.”

For Super Bowl 50, Evertz will provide three 10GbE-networked double-density DreamCatcher-458D systems to the Levi’s Stadium control room. Each will be capable of three channels of 4K UHD, enabling the 49ers to take in six additional 4K/UHD signals. The DreamCatchers will take in 4K content captured by the 49ers as well as 4K signals from SSCBS. For a typical home game, the team deploys seven Sony F55 cameras, with five recording in 4K. For the Super Bowl, the 49ers production team, which will be joined in the control room by VWSE Productions, have deployed an additional four F55 4K cameras for the videoboard show.

The 4K feeds provided by SSCBS, combined with 4K content captured by the videoboard-production team, will hit the 6×1 double-density 4K/UHD DreamCatcher cluster — controlled by a single operator — and allow pan, scan, and zoom functionality in the 4K raster, while maintaining full 1080p60 output to the Daktronics displays. The 49ers operate the control room in 1080i, requiring conversion of the 1080p signal to a 1080i signal, which is then fed into the room’s Sony 7000x switcher.

In addition to the CBS-generated 4K sources, the 49ers will also receive Pylon Cam signals in 1080 from SSCBS via the IP system. These will be fed into the existing 2K DreamCatchers for additional videoboard footage during the game.

“At the end of the day, we’re doing this because we want to give the 70,000 fans that come here on game day the ultimate experience,” says Kennedy, “because, yes, you can watch it at home but we want to be able to give people in the stadium a unique experience on the videoboards as well.”

Throughout the Super Bowl, Evertz will have staff in both the control room and the truck compound to support the in-stadium and broadcast production teams. “Evertz has been unbelievably supportive,” says Kennedy. “If I ever have a question or challenge or an issue, they are on top of it. … They’ve been fantastic.” 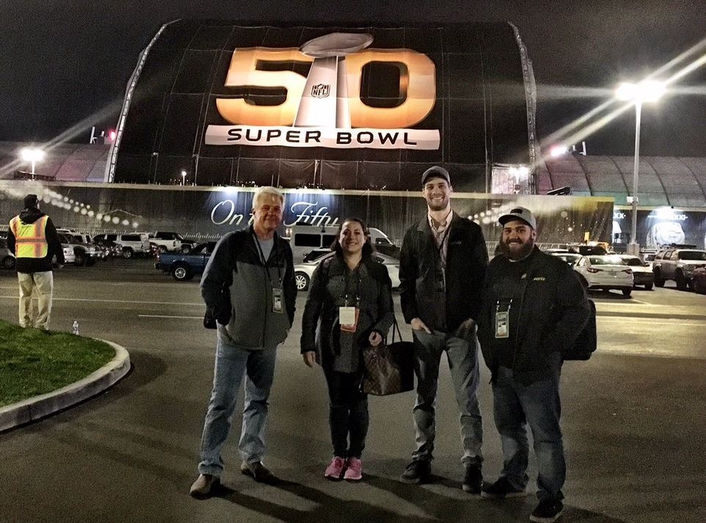 Joe Cirincione, VP, sales, sports and entertainment at Evertz, confirms, “Evertz is proud to have worked with the incredible team at the Levi’s Stadium to implement this new IP infrastructure. It would have been impossible to share this many signals between the truck bays and the control room over traditional SDI infrastructure. Therefore, we are thrilled that we could deliver an IP solution that met all of Aron’s requirements for the Super Bowl, while also allowing for future expansion.”