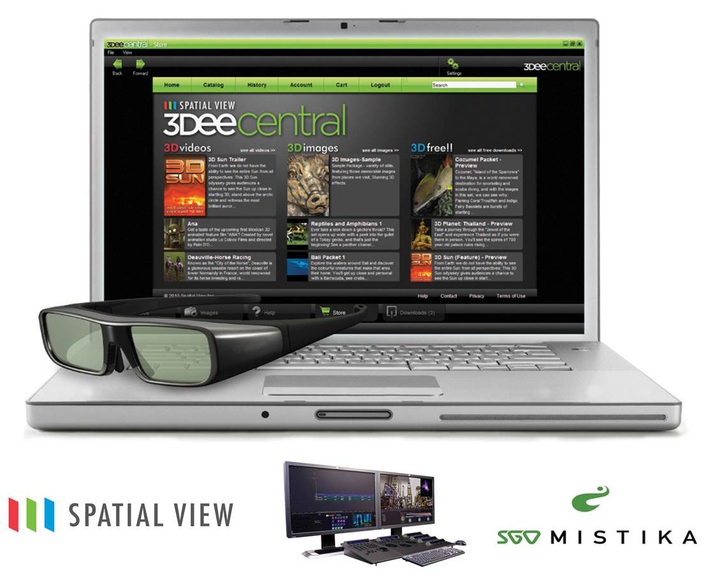 Spatial View has installed a stereo 3D Mistika HD system which delivers an extensive set of 2D and stereo 3D tools including colour grading, parameter adjustments, image deformation correction, match grading, and geometric correction. Mistika is a high-end finishing post-production system featuring editing, compositing and colour grading. Each of these areas is seamlessly integrated into a single timeline-based interface, allowing live interaction between all functions. Mistika accepts almost any image resolution from SD to 4K (Standard Definition to large format digital film) and beyond, in 2D and 3D. Ihor Petelycky, General Manager of Core Technology and Applications at Spatial View stated: “Our greatest challenge is the adaptation of HD and other high resolution video and image content for display on small screens including PCs, laptops, mobile phones and tablets.” Ihor continued: “We need to make sure that image quality and stereo 3D are optimised for each display type, and Mistika provides us with the tools to make this possible.”

Spatial View plans to use Mistika as its primary platform to automate the adaptation processes based on display characteristics. “This will give us and other Mistika customers the ability to quickly and easily re-purpose stereo 3D content for a wide variety of stereo 3D displays and maintain the high level of image quality and stereoscopic integrity customers have come to expect,” Ihor added.

“Spatial View is one of the first companies addressing the challenges of stereo 3D content adaptation and we are proud to have an exclusive and strategic partnership with them,” said Geoff Mills, Director of SGO Global Sales & Operations. “The re-purposing of content for online and mobile delivery has become an integral part of the distribution chain for content creators, broadcasters and distributors. We are very pleased Spatial View has selected Mistika as their platform of choice to create file formats for stereo 3D content for iPhone, laptops and other platforms, and that it is the official system Spatial View has endorsed for these deliverables.” Geoff concluded.

Founded in 2004, with offices in Toronto, San Francisco and Dresden, Spatial View is an established international company with an aim to make the stereo 3D experience more diverse, accessible, cost-effective and inspiring for its users. In January 2011, Spatial View launched 3DeeCentral which is an online store of stereo 3D content offering music videos, movie trailers, video shorts, and images, giving proponents of 3D the ability to view images and videos at home or on the move, with their mobile device, laptop or desktop. Market analysts forecast that by 2013, there will be over fifty-million stereo 3D-enabled mobile and PC devices on the market and 3DeeCentral is now able to deliver content to everyone.

Spatial View Inc. is a pioneer in stereo 3D content delivery and auto-stereoscopic display technologies. As the source of high quality stereo 3D content, technology and products, Spatial View delivers the best viewing experience on a wide variety of 3D PC, mobile and internet connected devices. The company makes the 3D experience accessible, affordable, versatile and inspiring. Established in 2004, Spatial View is headquartered in Toronto with offices in San Francisco, Dresden and Brussels.