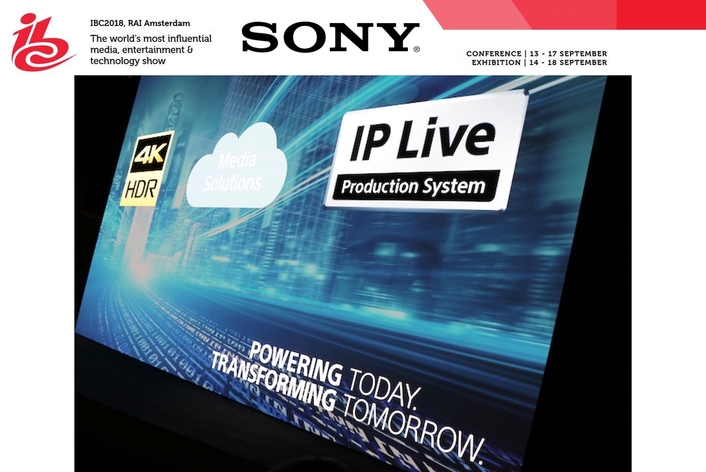 Broadcasters and production companies across the US, Europe, China, Japan and other Asian countries invest in Sony’s IP Live Production as IP adoption accelerates

Sony is growing its IP Live Production System solutions with further support for SMPTE ST 2110 in both HD and 4K. This strengthens its commitment to driving interoperability based on open standards and supports wider industry adoption. “The industry transition to IP has been driven in no small part by wide collaboration,” explained Norbert Paquet, Head of Product Management, Sony Professional Solutions Europe. “Sony has been leading this journey and we continue to actively invest in shaping the IP landscape to offer customers the best systems, services and support they need to unlock IP’s full potential. By enhancing our Live Production offering, with new support for SMPTE ST 2110 in both HD and 4K, we’re giving our customers ecosystems and technologies they need for their future.” 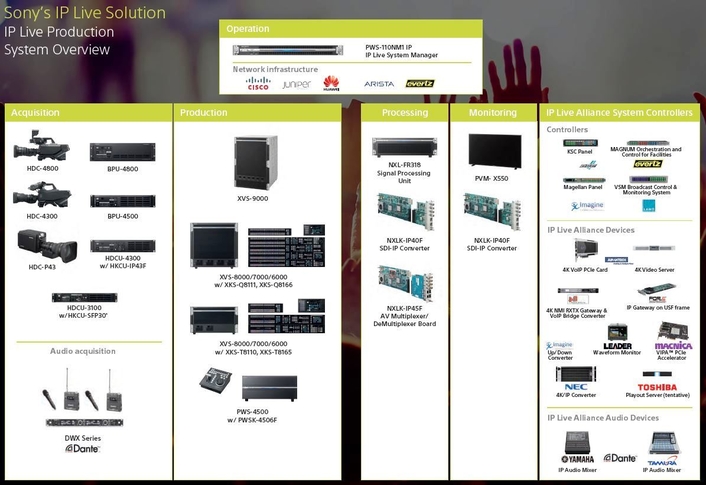 Also, to offer customers greater choice, Sony will continue to invest in Networked Media Interface, Sony’s unique IP-based transmission technology, of which transport specification has been standardised by ARIB (Association of Radio Industries and Business - an organisation that establishes standards for broadcast and telecommunications in Japan) as ARIB STD-B73 1.0.

As the market gears up for an IP-driven future, Sony has seen rapid global adoption of its IP Live Production System which has already proven itself to more than 30 systems around the world.

The following companies have recently discovered the benefits of IP:

Similar multi-studio IP Live systems have also been adopted by broadcasters in the US.

Sony will be demonstrating its latest innovations at IBC2018, giving visitors a glimpse into how IP-enabled production workflows will enhance production efficiencies through innovative architectures. In partnership with Century Link, an IP-enabled Remote Integration (REMI) setup will connect a 4K Production Studio and Control Room at Sony’s booth in Amsterdam to a remote HD production studio in Hilversum, Netherlands at Euro Media Group’s facility. The hub studio at Sony’s booth will control the whole system, including 3rd party vendors, in both locations through a prototype of Orchestration System, switching video feeds using IP Live System Manager.

Sony Professional Solutions exists to unleash the incredible power of images. Helping customers tell stories, springboard change, connect emotionally, stimulate learning and activate potential is at the heart of our vision. With a winning combination of technology and creativity Sony partners with businesses across a wide variety of sectors including Media and Broadcast, Theatre, Healthcare, Sports and Corporate and Education markets to deliver innovative and transformational customer solutions. Operating with over 30 years’ experience and a trusted network of established technology partners Sony’s wide portfolio of product and services propositions provides true value to businesses and informs, educates, entertains and inspires their customers.