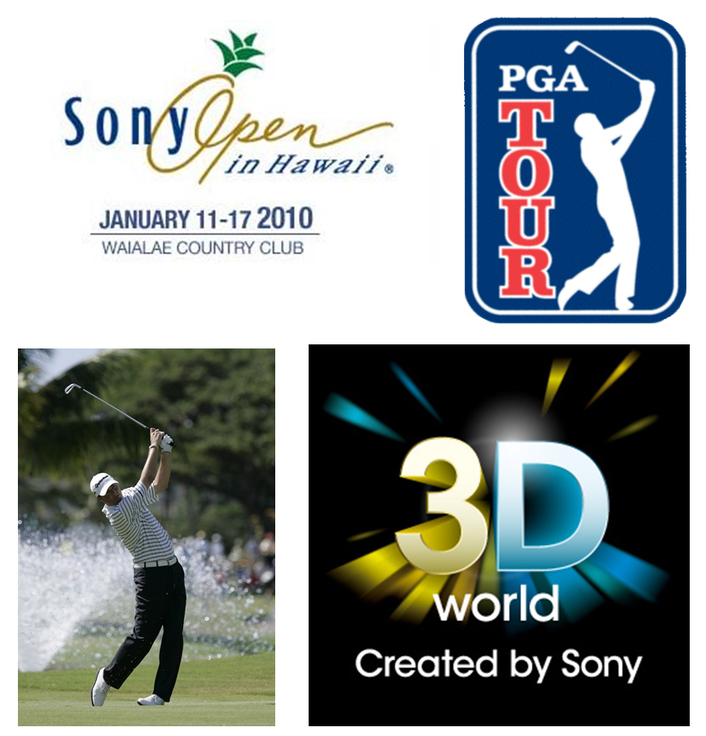 Golf in 3D from 2011 onwards
Sony Corporation and the PGA TOUR today announced a partnership to explore new entertainment experiences for golf in 3D. Together, Sony and the PGA TOUR will work to develop a plan to make the 2011 Sony Open in Hawaii the first PGA TOUR event shot in 3D and available for distribution in 3D to select audiences, in addition to its regular 2D presentation.

Development work begun at the 2010 Sony Open, at which Sony shoot portions of the event in 3D as a first step in the joint study, and continue through the 2010 PGA TOUR season. The organizations will also explore development of 3D golf for other potential applications.

"From the lens to the living room, Sony is driving the transition to 3D," said Sir Howard Stringer, Chairman, CEO and President of Sony Corporation. "Just as video of sports and nature were key to the adoption of high definition television, we expect the same to be true for 3D. The sport of golf and the natural beauty of Hawaii are an ideal combination to showcase the distinct advantages of 3D and bring the full, 3D experience to life for consumers."

"High definition television is already driving increased golf viewing," said PGA TOUR Commissioner Tim Finchem. "We are excited about working with Sony to showcase the potential of 3D technology at the 2011 Sony Open in Hawaii. We believe that 3D has the potential to put the fan right in the center of the action and make our telecasts even more exciting and engaging. The beauty of the Sony Open in Hawaii makes this the perfect setting to debut this technology."

The Sony Open in Hawaii, now in its 12th year, is one of the leading charity sporting events in the state of Hawaii and reaches over 450 million homes in over 200 countries via multiple national and international broadcast networks. All net proceeds from the event benefit Friends of Hawaii Charities, an organization dedicated to providing funds to qualifying not-for-profit endeavors in support of women, children and elderly in need.

The PGA TOUR is a tax-exempt membership organization of professional golfers. Its primary purpose is to expand the PGA TOUR domestically and internationally so as to substantially increase player financial benefits while maintaining our commitment to growth in charity and integrity to the game.
In 2009, the PGA TOUR, Champions Tour and Nationwide Tour collectively consist of 100 events staged in 35 states and in 11 countries.
In addition to providing competitive opportunities for its membership, TOUR events also generate significant funds for local charities. In fact, the three Tours have surpassed $124 million in 2008 and $1.4 billion in overall charitable contributions. The PGA TOUR's web site address is www.pgatour.com and the company is headquartered in Ponte Vedra Beach, FL.

Sony Corporation is a leading manufacturer of audio, video, game, communications, key device and information technology products for the consumer and professional markets. With its music, pictures, computer entertainment and on-line businesses, Sony is uniquely positioned to be the leading electronics and entertainment company in the world. Sony recorded consolidated annual sales of approximately $79 billion for the fiscal year ended March 31, 2009 Sony Global Web Site