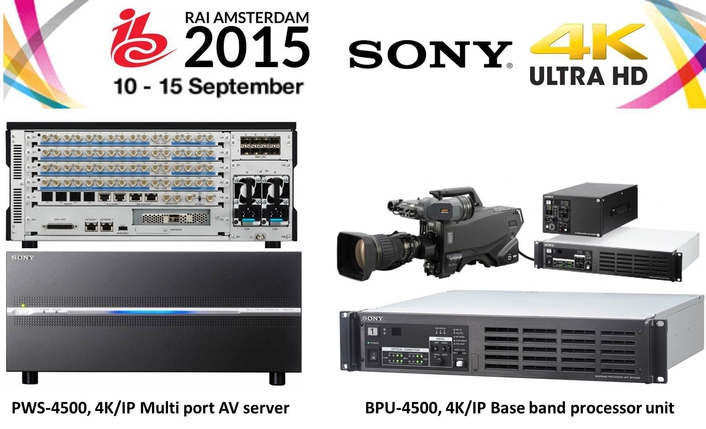 Sony will share this new technology at IBC 2015, as 4K IP-ready new products both with direct IP interfaces and conventional SDI, for flexible system set-up and smooth migration to IP. Attendees at this years show will have the opportunity to see the XVS-8000, the world’s first 4K/IP Live Switcher; the BPU-4500, a 4K/IP base band processor unit; and the PWS-4500, a 4K/IP multiport AV server. These products come together to form a full ecosystem that delivers a IP Live Production System that is efficiently managed and distributed through the Sony’s IP Live system manager.

While developing solutions for IP Live production, Sony developed a new AV transmission interface called the Networked Media Interface. The Networked Media Interface will transform all signals for live shooting to IP, such as video, audio, meta-data and synchronous signals and control signals. It will permit resource sharing with other production systems, meaning that file-based systems and live systems can be integrated into one. This will not only improve productivity but will provide significant cost savings for broadcasters, as they will no longer need to double their investment for each production system.

The advances made with the Networked Media Interface also reflect the technological advances within the wider industry, catering for the growing demand for content with higher frame rates, and higher resolutions.  The Networked Media Interface is a future proofed interface that supports SD, HD, 4K, 8K, and high frame rate in both compression and non-compression. It also transmits 4K over IP in one single Ethernet cable in low latency video codec.

With the introduction of IP Live, broadcasters ensure their infrastructure is efficient, scalable and that they have an investment that will last for the next decade and beyond, effectively replacing and going beyond the current capabilities offered by SDI. System scalability is reflected in the migration from SD/HD to a next generation video format.

As part of the Networked Media Interface, Sony  has submitted technical specification of low latency video codec that was developed for 4K transmission over IP in 10Gpbs, to SMPTE (Society of Motion Picture and Television Engineers) as Registered Disclosure Document (RDD). As well as this, Sony proposed necessary  technological elements for  live production over IP, to take effect in the SMPTE ST 2022definition.

At this year’s IBC, Sony is proud to announce that TV Globo, the prevalent broadcaster in Brazil, has chosen Sony as their IP migration partner. TV Globo recently signed a contract with Sony to develop the world’s first purpose-built 4K/IP Outside Broadcasting truck that will be available in 2016.

“This new OB truck will be a key component of TV Globo’s production plans for the upcoming big sporting events  happening in  Brazil from 2016 onwards.  Sony has always been a reliable partner for TV Globo,   so having Sony as a strategic partner in this project gives us confidence that it will be delivered successfully. What’s more, Sony’s vision around 4K/IP live technology is very well aligned with our own. The 4K/IP product line up just announced by Sony is  perfectly suited for this 4K/IP OB truck  project.” said  Raymundo Barros, CTO of TV Globo.

New Products
●  XVS-8000, the world’s first 4K/IP Live Switcher
Supporting the Networked Media Interface, the XVS-8000 has direct IP connectivity. Based on the renowned MVS-8000X, the 4K function is enhanced in the XVS-8000, similar to 5ME configurations, so as to meet the demands of live event production. 4K CG wipe is also available due to the increased capacity in the XVS-8000 frame memory, while secure back-up and fast restoring is enabled with the built-in SSD.
Available in January, 2016.

●  BPU-4500, 4K/IP Base band processor unit
Supporting the Networked Media Interface, the BPU-4500 has direct IP connectivity, working with the 4K cameras such as the HDC-4300, the F65 and the PMW-F55 together with CA-4000, camera system adapter. The BPU-4500 generates 4K signal and simultaneously HD signal outputs that match to the current Sony HD camera system. The BPU-4500 works with the HDCU-2000/2500 camera control unit to permit the same system operation as the current HDC camera system.
Available in January, 2016.

●  PWS-4500, 4K/IP Multi port AV server
The PWS-4500 supports both the Networked Media Interface (by optional board) and conventional SDI.  Providing a new “Share Play” feature, with 10G networking, files can be monitored and shared between servers located remotely, for example between several OB trucks or facilities. Redundant power supply and 8x reply in HD (optional) are also available.
Available in January, 2016.

Sony is the leading supplier of AV/IT solutions to businesses across a wide variety of sectors including, Media and Broadcast, Video Security and Retail, Transport & Large Venue markets. It delivers products, systems and applications to enable the creation, manipulation and distribution of digital audio-visual content that add value to businesses and their customers.  With over 25 years’ experience in delivering innovative market-leading products, Sony is ideally placed to deliver exceptional quality and value to its customers. Sony's Professional Services division, its systems integration arm, offers its customers access to the expertise and local knowledge of skilled professionals across Europe. Collaborating with a network of established technology partners, Sony delivers end-to-end solutions that address the customer's needs, integrating software and systems to achieve each organisation’s individual business goals.