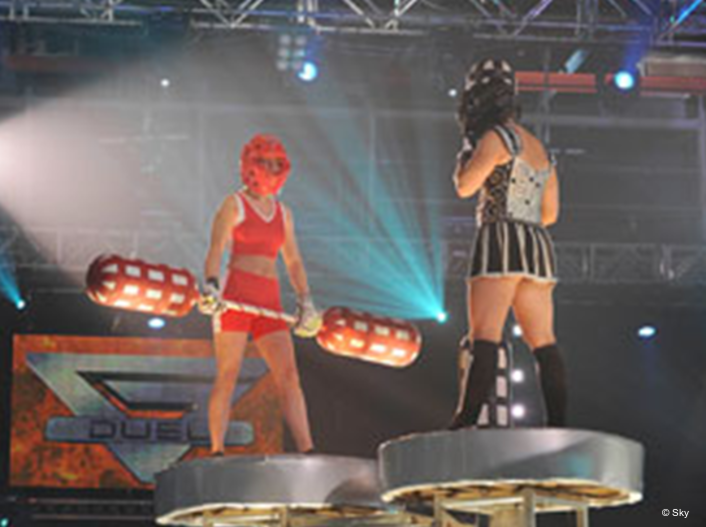 Duell in 3D
“It’s about getting everybody to understand what makes for good 3D shots. In 2D you can get away with faster panning and jumps versus 3D – for 3D it’s what we call ‘linger longer’. If you’re jumping between shots, the depth is way in and then way out and, if you don’t have a small depth transition between shots, that creates a lot of eye strain.” Sky has made the first significant moves towards broadcasting stereoscopic 3D programming. It has successfully produced footage from four separate events and delivered the programming through a high definition set-top box. 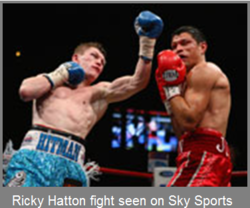 The Sky production team began by recording the boxing match between Ricky Hatton and Juan Lazcano on May 24th last year. They then decided to broaden the test with three different shoots in November: rugby, football and Sky1’s signature entertainment programme, Gladiators. Capturing action in 3D requires two images from each camera position, in order to mimic the way that our eyes view an object. Two cameras capture the same image from slightly different angles or perspectives. The two images are then projected to the eyes in a way that the left eye sees only the left image and the right eye sees only the right image, using special glasses. The brain then processes the two separate images to create the feeling or illusion of depth in the way that eyes view the real world. 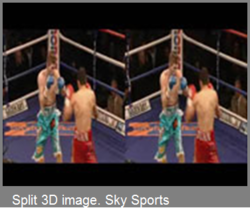 Each of Sky’s test shoots involved setting-up three camera positions, with, dependent on the production, two Sony PMW-EX3 camcorders, two HDC-1500 or two HDC-950 HD cameras required for each rig. Brian Lenz, Sky’s head of product design and innovation, explains how they deployed two types of 3D rig – passive and active. “Passive rigs can’t actually zoom and refocus while shooting without losing synchronisation of the two images. They are effectively locked off. With the active rig, you have the ability to synchronise zoom and focus between two cameras, so that you can quickly zoom in and out.” BSkyB chief engineer Chris Johns describes how some rigs were set-up as mirror or beam-splitting rigs, which bring the lenses closer together, emulating the closeness of the human eyes. “You use a highly mirrored piece of glass, so that one camera shoots through it and one bounces off,” says Johns. “It’s a similar scenario to autocue, where the presenter sees the words, but the viewer doesn’t.” Mirror rigs are particularly important for shooting action at close range; other rigs, where the cameras are side by side without the aid of a mirror, are efficient when shooting action at a distance of three or four metres or more. 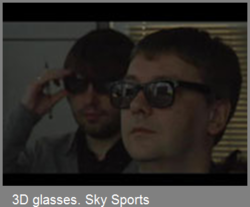 The PMW-EX3s were chosen because of their convenient light weight for a complex rig and because the sensors are of a high quality. Johns explains that they changed the lens on the front and recorded both cameras from each position locally onto a single tape, using Sony SRW-1 HDCAM SR recorders to maintain the highest quality possible. “With the SR, the two cameras can record in total synchronisation to the tape deck, which is only possible at the moment with the SR deck. We needed this quality because we are manipulating the alignment and fine-tuning in the edit.” The team had guidance from 3D specialist companies Pace and 3Ality, but not all operators had 3D experience. “You can get a good camera operator up to speed quickly,” says Lenz, “It’s about getting everybody to understand what makes for good 3D shots. In 2D you can get away with faster panning and jumps versus 3D – for 3D it’s what we call ‘linger longer’. If you’re jumping between shots, the depth is way in and then way out and, if you don’t have a small depth transition between shots, that creates a lot of eye strain.” 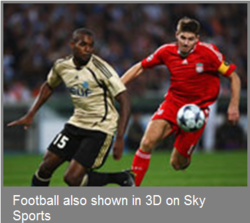 The different sporting events were given varying 3D treatment. The football, rugby and Gladiators contest were all shot using passive rigs, whereas the boxing was recorded using three active rigs and slightly higher-end cameras, making it far closer to the real deal. “In my view the boxing is the best show visually,” says Lenz. “It’s a uniquely beautiful set-up in 3D because it’s a natural stage. The crowd is very close to the centre of action, so there are not so many wide shots required, and there is natural depth to the image with the boxing ring and the audience off into the distance, In addition, the ability to control the lighting to focus on the ring and just highlight the crowd lets you take the fullest advantage of 3D to create that visual depth that is so stunning.” Editing requires great sensitivity to the 3D process, despite using 2D techniques for 95 per cent of the post-production. The initial cut was done in-house at Sky using HD Avid, looking at two images side by side, with the 3D edit and conform being supplied either from 3Ality or using Quantel’s Pablo system. The results of the four shoots have inspired Sky to commission more 3D content and to continue testing the format. There are plenty of technical challenges still to consider, including the possibility of doubling up HD cameras to record both HD and 3D footage of an event. Sky’s plan is to use Sky’s existing network for viewers to receive 3D signals to 3D-ready TVs. But first the broadcaster needs to understand if there is a market demand for 3D. Having invested in HD and become Europe’s most comprehensive and commercially successful HD service, it is hopeful that the infrastructure it has put in place will make 3D its next success story.