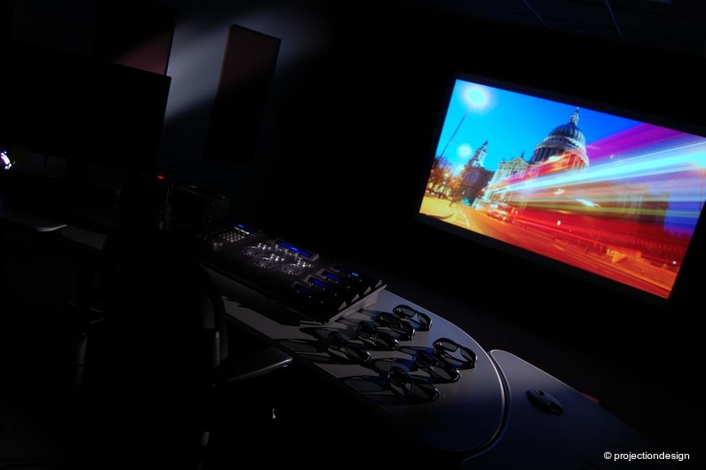 “The dedicated 3D finishing suite is designed to be at the very centre of our stereoscopic workflow, it perfectly complements the 3D service offered by our production rental department Axis Films,” says Simon Craddock, Managing Director at On Sight in London. “The dual cineo82 projectors from Norway’s projectiondesign® project calibrated 3D images on to an 11ft silver screen. The suite features SGO’s Mistika, a post production system we use for high-end stereoscopic finishing, handling files up to 4K in resolution with real time 3D editing, compositing and color grading. The projectors are fantastic for client 3D reviews using polarized glasses and also for colorists or operators to view material on a big screen.”

“Our 3D suite demands the very best that there is in projection and after much research in the evaluation phase, it was projectiondesign that had the best solution, resulting in the world's first 3D 3-chip DLP® stereo projection installation, something that we are incredibly proud of and which is a valuable tool in delivering breathtaking results at every stage of the workflow for our important clients. projectiondesign suggested using dual cineo82 projectors in a stereo configuration. The compact projectors use ACOP optical color processing technology and by combining fixed and motorized optical filters for each color channel, the projectors can be optically calibrated with near infinite accuracy.”

On Sight have most recently worked on a mix of 3D projects for music, commercial and feature clients including a 3D cinema advert for Pink Banana Studios for the award-winning West End Musical, The Jersey Boys, which involved the green screen keying, converging and stereo alignment of the four stars.

Anders Løkke, International Marketing & Communications Manager at projectiondesign adds, “The cineo82 is the best value and highest performing 3-chip projector in its class. The strength and performance is affirmed by the momentum we are gaining in the broadcast, visual effects, digital intermediate, screening and post production markets and we’re delighted that our solutions and technology are being used on the SGO Mistika Booth at NAB 2010 which perfectly reflects the world’s first installation working at On Sight today!”

projectiondesign is a Norwegian company that designs, manufactures and markets a range of high performance projectors for professional, business and consumer applications. Amongst its core markets are high resolution scientific visualization and simulation, medical imaging, e-cinema and public displays. Numerous industry milestones that distinguish projectiondesign’s award winning, innovative technology include the introduction of the world’s first single-chip SXGA DLP projector in 2002, the first commercially available 1080p DLP projector in 2006, the first WUXGA resolution DLP projector and the first portable and high-resolution active 3D stereoscopic projector in 2008. In 2009, projectiondesign introduced its first 3-chip projector and made its first foray into LED illumination. 2010 signifies the world premiere of the Remote Light Source™ projector, WQXGA resolution (2,560 x 1,600) projector and the company’s first warp and blend image processor. The entire professional product range is warranted for 24/7 usage. projectiondesign is based in Fredrikstad (Norway), and has representation in Singapore, Dubai, Milan, Stuttgart, Bilbao, Mumbai, Cape Town, Liverpool and New York.

On Sight are a HD & 3D production services company, offering technical and equipment needs from shoot to screen. That includes camera rental, equipment hire, technical services and expert advice. On Sight have bases in both London and Shepperton Studios. The company is made up of three departments; Axis Films, HD Hire and HD Lab.

Mistika is a flexible high-end post production system capable of SD, HD, 2K, 4K, stereoscopic 3D with real-time Red camera and other data workflows. It seamlessly integrates timeline-based editing, conforming, infinite-layer compositing, color grading and image restoration all in one complete system with various toolsets working together in the timeline.