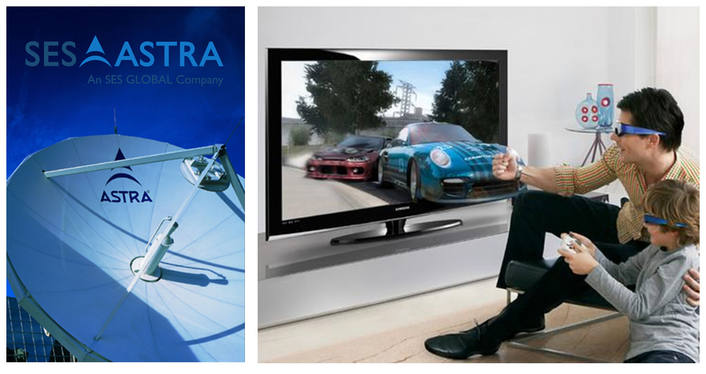 Astra 3D Demo Channel
SES ASTRA announced that it will launch a 3D demo channel on ASTRA. Following initial testing, the channel will go live on 4 May 2010 right in time for the opening of ANGA Cable, the international trade fair for cable broadband and satellite taking place from 4-6 May in Cologne, Germany. ASTRA's new 3D demo channel will be available free-to-air via ASTRA's orbital position 23.5 degrees East, and will initially target retailers and installers featuring high quality 3D content including sports, music and entertainment.

Ferdinand Kayser, President and CEO of SES ASTRA, said: "With the first 3D television sets now available in the market, the launch of the 3D demo channel comes right in time to support this exciting technology. The new ASTRA 3D demo channel demonstrates the huge advantages of satellite for the transmission of high quality 3D TV signals, and the leading role of SES ASTRA in driving innovations in broadcasting technology. By working closely with leading TV set manufacturers, broadcasters and other industry partners, we once again demonstrate our ability to position ourselves at the forefront of new technological developments, and to bring together key-industry players to foster innovations."

Many broadcasters which are customers of SES ASTRA have already engaged the new technology and either started first test transmissions or launched regular 3D broadcasting. While British pay-TV operator BSkyB has been broadcasting soccer matches in 3D to pubs and clubs across the U.K. and Ireland since early April, French pay-TV operator Canal+ announced the launch of its first 3D channel in December 2010.

Transmission details for the new ASTRA 3D demo channel will be communicated at a later date.