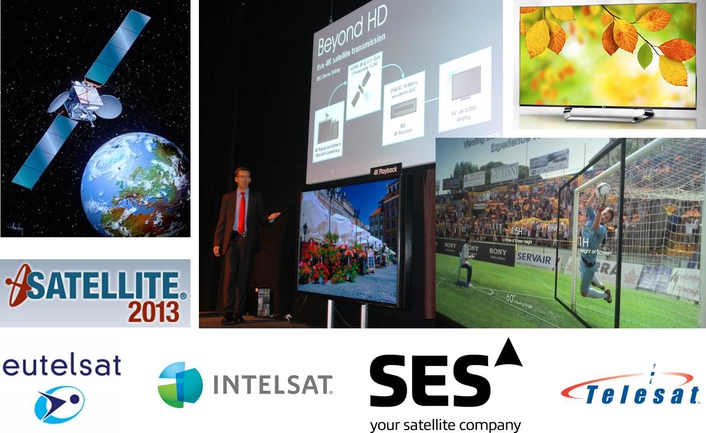 The ‘big four’ of top satellite operators at the Washington Satellite 2013 show, through their CEOs, exhibited some considerable differences in their timetables for the introduction of Ultra-HDTV. However they agreed that the rollout of Ultra HD will be a major driver of demand for satellite services.

SES’s Romain Bausch was the most bullish of the quartet, and he said he expected 4K/Ultra HD to make a meaningful market entry starting in 2015 or 2016. He explained to delegates that there was programming available in the form of existing ‘native’ HDTV material, that could be up-converted very successfully into 4K. Additional 4K content would come from live sports events and movies

“Scaling up the HD signal to Ultra-HD is already providing a very good experience,” Bausch added. "I am more optimistic. I would say 2015. But it will be really different from the launch of HD years ago. This is because of the processing capabilities of the reception equipment. There will be much more content available than when HD launched. At that time, scaling up standard digital into an HD picture was looking relatively ugly. With today’s processing capabilities, when you watch the scaling up of native HD content into Ultra HD it is already a very good experience. So I believe with this greater content availability, it will happen, first, earlier and, second, faster than with HD.”

He was supported by Eutelsat’s CEO Michel de Rosen who said that 4K test shots that he had recently seen were amazing. Eutelsat is already transmitting a 4K test channel.

Intelsat CEO Dave McGlade predicted a market for Ultra HD in 2016, but pointed out: “we certainly need to see the development of HEVC, the follow-on from MPEG-4 encoding, and to have enough scale to bring the pricing down. It’s much too expensive. We have to have the programming to go along with it. But we are talking from going from 4k, which is four times the throughput of standard HD to 8k, which is 16 times. So the question really is: do we really have big adoption at the 4k level or do we jump right to 8k and how long does that take? Plus, people have bought a lot of HD sets and they want to use them. So I think it’s going to take a while.“

Telesat of Canada’s Dan Goldberg was the most pessimistic of the four, saying that the introduction was further away, other than perhaps for some extremely early adopters, and suggested it would be 5 years from now before U-HD was a serious force commercially.

However, just an hour or two later in another well-attended conference room at the show, a panel of experts were also asked much the same question, and while there were some strong supporters of an early debut for 4K (and Eutelsat’s director of innovation Antonio Arcidiacono was a strong believer, along with Gary Yacoubian, CEO at Specialty Technologies LLC), others took a more cautious approach, suggesting that quite a few elements still needed to come together to make 4K a reality.

Tim Allessi, director/new product development at LG Electronics USA, said his company was ready with market offerings today and while prices were high he believed that a sub-$10,000 price tag would then help remove price as a barrier to entry for many early adopters. Brian Markwalter, SVP R&D at the Consumer Electronics Association, said few could now doubt that the industry was ready for the new technology – but that didn’t mean that broadcasters would start transmissions any time soon.

Asked what was the most important factor in kick-starting viewer adoption of U-HD, and Markwalter said simply “ESPN”.

But sitting quietly at the back of the room, and unnoticed by the panel was Philip Goswitz, SVP/Space & Communications at DirecTV. Asked later what DirecTV was doing about 4K, he said he was a fan but the closer DirecTV came to making its U-HD decisions the less he could say about those plans. “And I cannot say a word,” he explained!