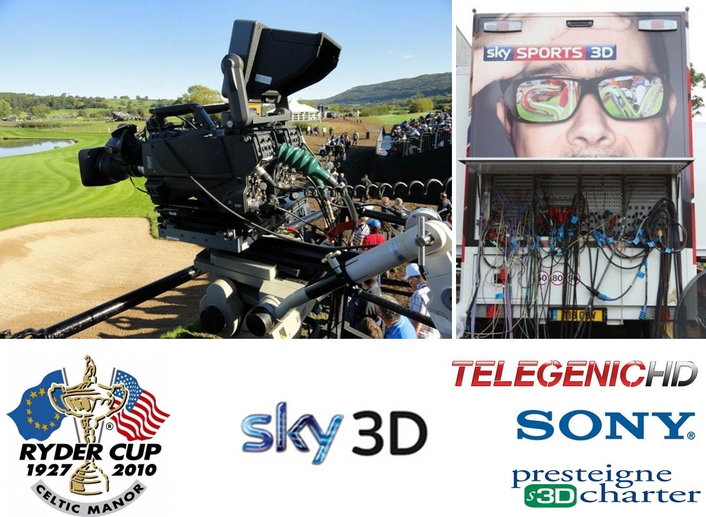 The Ryder Cup’s opening day coincided with the scheduled launch of Sky 3D, Europe’s first residential 3D TV channel
The Ryder Cup 2010 was remarkable not only for being the wettest golfing event in many a year and arguably the closest in the tournament’s history, but also for being the biggest ever live 3D production broadcast. Following hot on the heels of the FIFA World Cup in June, this was the second major international sporting event covered in 3D that Presteigne Charter has been involved in.

Presteigne Charter has provided a wide range of broadcast equipment to the last four Ryder Cups hosted by Europe, facilitating the production for the three – or in this case, four day event. This year’s tournament, held at Celtic Manor in Wales, provided for the most technically challenging of events, notwithstanding the appalling weather conditions the event was held under and the deployment of an exciting new broadcast technology.

Celtic Manor is the largest venue that’s thus far been used for 3D broadcast, requiring cabling to cover around 32km of course and needing a substantial number of fixed and moveable rigs to cover the huge amounts of ground. To aid the 3D production set up – a unique collaboration between Sky, Telegenic and Sony – additional technology has had to be developed specifically for this event.

Presteigne Charter was an integral element of the Ryder Cup 3D production providing four specially designed wireless 3D cameras to the tournament and two Element Technica Quasar rigs in parallel mode. Next generation MPEG4 RF systems were employed for the first time for the wireless 3D cameras, allowing both left and right HD signals to travel over a 10MHz bandwidth slot, while maintaining the highest possible picture quality. In addition to the advantages of lowering bandwidth requirements, the new RF systems require less power and are lighter than previous versions.

Despite the Ryder Cup being rained off on the opening day of the tournament and forced to run for an additional day, the broadcast of the tournament, which ran between October 1st and 4th 2010, attracted peak viewing figures of around 1.6million people.

The Ryder Cup’s opening day also coincided with the scheduled launch of Sky 3D, Europe’s first residential 3D TV channel and became one of the highlights of the channel’s debut weekend.

Europe went on to record a 14.5-13.5 victory in the contest on the fourth and final day.