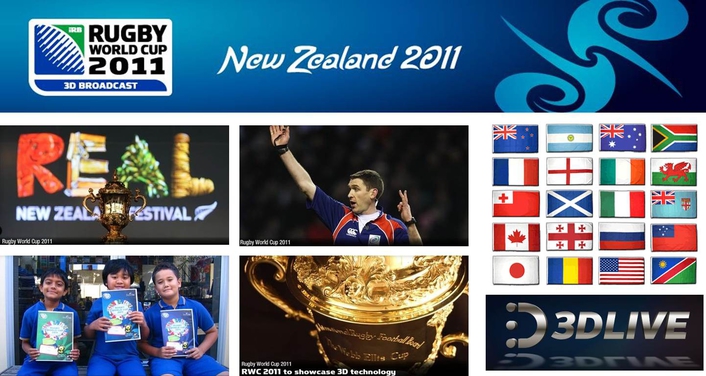 One of the pioneers of 3D production in New Zealand, 3DLive will deliver a 3D feed of the Rugby World Cup 2011 semi-finals, Bronze Final and Final, taking advantage of the latest next generation technology to give viewers around the world a unique experience of Rugby’s showcase Tournament.

The groundbreaking deal means that viewers watching the matches will experience the sheer immediacy and visual clarity of the action as if they were on the pitch themselves.

3DLive will produce a theatrical feed for cinema and big screen venues in New Zealand and Australia and this feed will also be available to global partners. A broadcast feed will be available to all RWC 2011 Rights Holding Broadcasters.

RWCL Chairman Bernard Lapasset said: “This announcement represents a significant development for Rugby World Cup and underlines our commitment to ensuring that Rugby fans around the world are able to enjoy the latest broadcast technology."

“Over four billion television viewers enjoyed the last Rugby World Cup. In a sport where innovation and tradition go hand in hand we will give Rugby fans a new viewing dimension that will enhance their experience of a tournament that continues to reach out to more men, women and children through all media platforms.”

“We are proud that Rugby World Cup can serve as a platform for advancing technology and the viewing experience and we are delighted to be partnering with a company that has a wealth of experience in 3D production and technology.”

3DLive Director Ronel Schodt said: “3D technology offers a stunning new perspective to traditional 2D Rugby coverage. You really do feel as if you’re in the front row of the stadium. It’s an experience that’s as close as you’ll get to being at the live match.”

“We are pleased and honoured to be part of the first 3D sporting event ever generated in New Zealand. While we are still working through the technical and operational requirements it is our intention to offer these 3D matches to SKY subscribers and our hospitality industry partners.”

In addition to making the broadcast feed available to Rights Holding Broadcasters, 3DLive will also provide a solution for offsite 3D viewing areas with venues in New Zealand and Australia set to be announced shortly and global providers later this year.