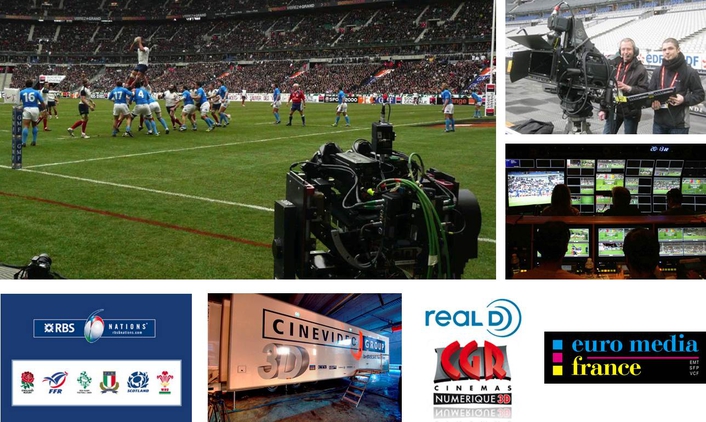 For the 3D production OB14 from Cinevideogroup (the Dutch subsidiary of EMG) was in place with a setup of eight 3D camera rigs
The climax of last year’s Six Nations took place in Paris on Saturday 20th March in front of 80,000 spectators with the Northern Hemisphere’s two traditional powerhouses France and England squaring off at the Stade de France in Paris for the final. The French national rugby team “Les Bleus” celebrated 100 years of playing the Six Nations with a 12 – 10 victory over England. This anniversary was further marked by the first 3D broadcast of a rugby match in France – an achievement made possible through the technical expertise of Euro Media France.

France - England was shown in 30 cinemas across France, giving the audiences a new experience in watching sport and the feeling that they were actually in the Stade de France – but much closer to the match as the spectators at the stands.

Following on from this success of a live 3D broadcast to cinemas across France of the RBS Six Nations, Euro Media France again took the challenge to produce this year’s RBS Six Nations match France – Wales in 2D and 3D for the host broadcaster France Television.

Two production and broadcast teams were in place when France and Wales were pitting at the Stade de France on 19 March 2011. For the 3D production OB14 from Cinevideogroup (the Dutch subsidiary of Euro Media Group) was in place with a setup of eight 3D camera rigs (from Element Technica with Sony cameras), including one crane, a travelling camera (XD Motion) and a wireless (HF) Steadicam. The 2D to 3D converted signals (via Sony’s MPE-200 box) of six SlowMo cameras (from the 2D setup) could also be included into the 3D production. The 3D production was directed by Christophe Bauoin (on a Sony MVS-8000 switcher) with commentary from Jean Abeilhou and Guy Accocebery.

The French Cinema Circuit George Raymond (CGR Cinemas) showed the match live in 3D in 34 of its multiplex theatres to rugby fans across France. It also was broadcast in 3D by Numericable (Ma chaîne 3D-channel 19), which offered its subscribers the live broadcast on its new dedicated 3D channel.

Simultaneously, France 2 broadcasted the match in 2D, produced by Fred Godard (who was also responsible for the international signal).