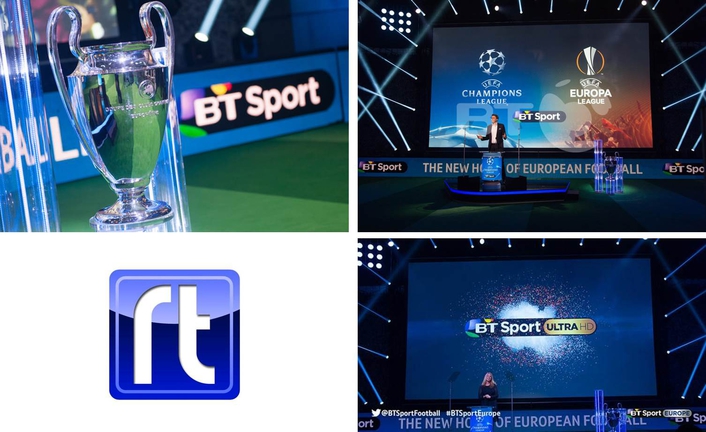 The news follows the recent announcement that BT Sport will be the new UK home of UEFA Champions League and UEFA Europa League football from the start of the 2015/16 season, following a tender process in which BT won the exclusive live broadcast rights to cover all 351 matches.

At launch, BT Sport announced that it would be “investing in ground breaking new augmented reality sets and digital analytics”. The broadcaster selected the RT Software augmented reality solution as part of an impressive studio upgrade, which will make its debut at the start of the European football season.

BT Sport undertook a thorough investigation back in April, to explore all of the augmented reality graphics options available in the market place, with RT Software’s tOG-VR3D chosen as the winning solution for the studio graphics.

RT Software’s forward-thinking tOG-VR 3D solution was designed specifically to meet the live graphics needs of the most demanding broadcasts. The package selected incorporates the delivery of a three camera VR studio with n+1 redundancy and as well as services to commission the VR studio with BT Sports’ chosen camera tracking technology from Ncam.

BT Sport has enlisted the help of the RT Software team for a range of additional on-site services and training on the new equipment, who will provide their expertise to the company’s studio engineers and designers. The team will also work to prepare and perfect the stunning new graphics ready for rehearsals ahead of the premier broadcast. Part of the agreement will see RT Software contracted to provide ongoing consultancy to the channel, and work on refreshing and renewing the graphics for the subsequent two seasons.

Jamie Hindhaugh, COO, BT Sport said: “The RT Software solution stood out because of the quality of the rendering – essentially what you see on the screen looks fantastic. RT Software has a desire to do graphics better than anyone else and a solid history of innovation around that. They are the perfect match for us, both technically and culturally.”

RT Software has also been selected to provide the overlay graphics for BT’s newly launched 4K UHD channel, as well as all of the playout graphics across every BT channel, which has been embedded within the Snell ICE playout solution.

Mike Fredriksen, Commercial Director, RT Software said: “We are absolutely thrilled to be selected by BT Sport. The channel is well and truly pushing the creative boundaries for their new European football coverage, and we are delighted to be able to play such a significant role in that. BT Sport is breaking the mold and these new programmes will give us a joint opportunity to showcase something really special to the millions of fans and viewers.”

About RT Software:
RT Software is a worldwide leading provider of real time graphics solutions. The product set spans CG, template driven 2D and 3D graphic overlays, election and news room graphics, specialist sports graphics and virtual studios. From its beginnings as an off shoot of the BBC 3D graphics Department in 2004, it now has installs from Iceland to New Zealand and includes the BBC, BT Sport, Fox Sports, NBC, and many other Tier 1 broadcasters in its growing customer base.