Technical partners unite to capture NT Live production and project to Vue audiences with the highest possible picture quality
Making an event of it: Sony, NT Live and Vue International join hands for exclusive 4K screening at Vue Cinemas of ‘Behind the Beautiful Forevers’

In April, Vue International audiences around the UK will exclusively be able to watch the acclaimed National Theatre Live production Behind the Beautiful Forevers – projected in Sony Digital Cinema 4K for the highest possible picture quality.

A landmark in event cinema, the 12th March performance of Behind the Beautiful Forevers was specially recorded in front of an audience at the NT’s Olivier Theatre using six Sony F55 4K cameras. Mastered as a 4K DCP (Digital Cinema Package), the show will be screened as a series of exclusive 4K presentations across the whole of Vue’s 83-site estate. Fully exploiting the phenomenal detail, contrast and colour gamut captured by the F55, the 4K screenings will bring patrons in Vue cinemas closer than ever to the atmosphere of being in the best seats in the house at the actual performance

Staged by the NT’s incoming Artistic Director Rufus Norris and starring Meera Syal, Behind the Beautiful Forevers has attracted widespread critical acclaim since its opening in 2014. Bringing the performance from stage to screen in 4K has seen Sony, NT Live and Vue working closely with a tight-knit team of technical partners to ensure the highest possible picture quality for cinematic presentation.

“We’ve been broadcasting theatre productions into cinemas since 2009, and we’ve really learned how to create an absorbing experience for cinema audiences”, says NT Live Producer Emma Keith. “Behind the Beautiful Forevers was a natural choice to get the 4K treatment. It’s a huge production, with lots of scene changes, complex on-stage action and colourful costumes. We immediately knew it would look great on camera.” 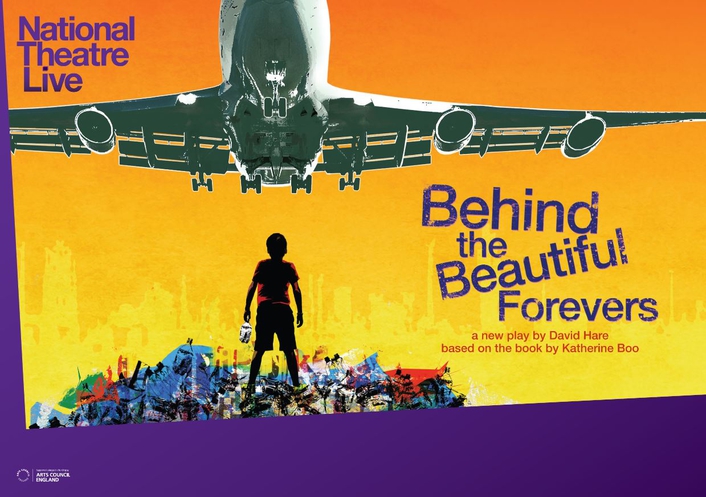 NEP Visions added a 4K layer to its NEP 1 OB truck for the outside broadcast element, once more pushing the technology boundaries of 4K coverage that the company provided on the NT’s pioneering War Horse broadcast in February 2014. Led by Tom Giles, the NEP Visions technical team has worked hard to ensure that the workflow has been maximised, improved and streamlined to make it as easy as HD.

Brian Clark, Commercial Director, NEP Visions said, “We pride ourselves on pushing the boundaries of live broadcast coverage and the use of 4K technology. 4K is a major focus for the NEP Group, and combining this with working on such a prestigious project for the National Theatre culminates in the perfect balance of premium content and cutting edge technology.”

“We’ve always been at the forefront of technology”, says David O’Carroll, Presteigne’s Head of Technology. “With the advent of 4K and the F55, NT Live now has the opportunity to capture stage productions with a cinematic aesthetic in the highest definition possible.” The cameras are rigged for the production with PL mount lenses, providing a shallow depth of field that’s ideal for the movie-like feel that NT Live and its production partners have taken pains to realise. “In many ways the F55 offers us the best of both worlds”, says David: “Its large-format sensor gives us that movie look, but with operation that’s just like an ordinary live TV camera.” 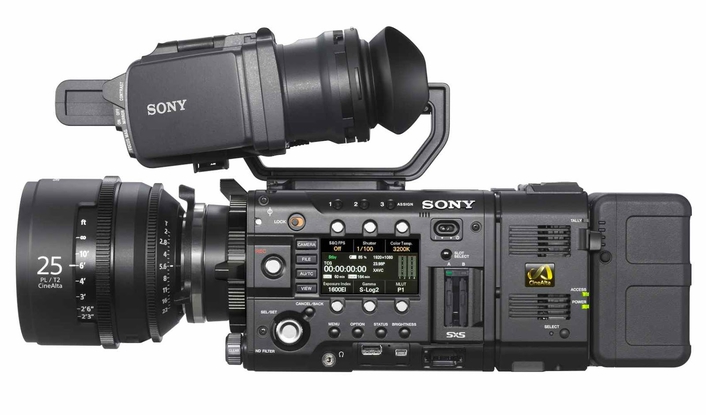 One F55 right by the front of the stage is complemented by three further cameras near the middle of the stalls – described by NT Live’s Emma Keith as “the best seats in the house”. An additional pair of F55 cameras fitted with remotely-controlled Fuji lenses are jib-mounted, grabbing dynamic tracking shots right over the audiences’ heads and into the performance space itself. Wide-angle establishing shots help capture the mood as the audience files into the Olivier auditorium. But once the curtain rises, the half-dozen F55 cameras are focused entirely on the stage action.

Lighting is subtly adjusted for an optimum look on camera, while carefully maintaining the integrity of the original lighting design. “Theatrical lighting can be a challenge for video cameras, with lots of sudden blackouts, changes and colour shifts”, explains Emma Keith. “We don’t re-light the show for broadcast, but we do make small adjustments in technical rehearsals. We also fine-tune things like make-up and even the colour of the performers’ hair. Then during the performance we’re constantly tweaking things to make it work for a cinema audience – we’re effectively colour grading in real time.”

“We’re doing this as a totally end-to-end 4K production for the benefit of Vue audiences” explains Technical Producer Chris Bretnall of Creative Broadcast Solutions, who’s been intimately involved in the realisation of every NT Live project since 2009. “We’ve put in 4K cameras, and the whole infrastructure is native 4K, with simulcast in HD.” Signals from each camera chain in the auditorium are routed via fibre to NEP Visions’ OB truck, where they’re recorded to a Sony PWS-4400 server. As Chris explains, the production workflow differs in one key aspect from traditional live TV broadcasting: 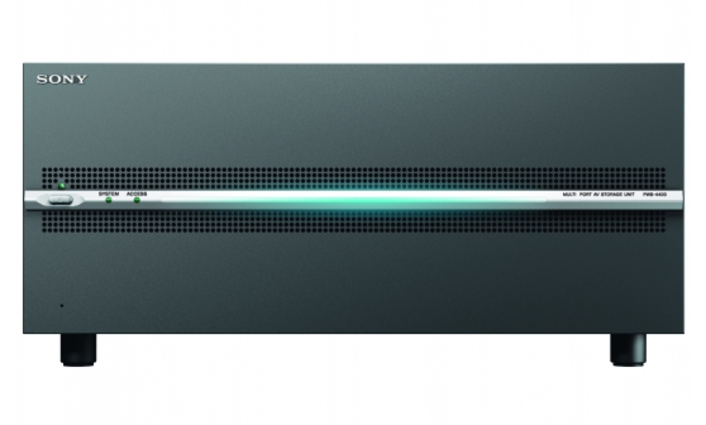 “The enormous colour space we’re capturing with the Sony F55s is far in excess of the Rec.709 standard for HD TV. And by mastering in UHD (3840x2160 resolution) and then creating a 4K DCP for cinema projection (4096x2160, via the addition of horizontal blanking), we’re fully exploiting what this camera is capable of.”

Every step of the production workflow ensures that Behind the Beautiful Forevers looks as good as technically possible. Projected natively in Sony 4K, it ensures that Vue audiences can experience the show with more colour, detail and contrast than they’d ever see on TV.

“Our job is to accurately translate the National Theatre’s creative vision, exactly as it’s meant to be seen in terms of lighting and colour grading” says David Margolis of Soho Digital Cinema (SDC), NT Live’s preferred mastering ‘lab’ for its cinematic productions.

“We want to give cinemas a great-looking product – and for Behind the Beautiful Forevers we’re working with the ‘as-live’ signal coming straight from the OB truck, completely uncompromised” notes David. Encoding for the 4K DCP takes places at 250Mbps, the upper limit of the DCI standard. This helps preserve as much as possible of the camera’s extended gamut into the P3 colour space that’s native to the Sony 4K projectors across Vue’s estate. The master is carefully QC’d in SDC’s viewing suite by the NT Live team, prior to its final transfer to a ruggedised 500GB hard drive that’s replicated for distribution to cinemas.

“When Vue audiences enjoy Behind the Beautiful Forevers projected in Sony 4K, they will experience the very best in contemporary drama on the big screen – with the absolute finest picture quality they’ll witness anywhere.”

“We’re delighted to be working alongside such a strong roster of artistic and technical talent on this unique project”, adds Paquet: “It’s just the initial step of a journey that will be marked by even more significant firsts this year.”

On April 2nd the acclaimed National Theatre Live production Behind the Beautiful Forevers can be seen exclusively by Vue International Audiences in Sony Digital Cinema 4K, screened across the whole of Vue’s 83-site estate.

About Sony 4K  Digital Cinema
With over 18,000 systems in the market, Sony Digital Cinema 4K technology lets moviegoers experience exceptional picture quality from every seat in the cinema – with spectacular detail, contrast and colour on any size of screen. Sony Digital Cinema 4K projection systems give audiences a more immersive, emotionally engaging visual experience you simply can't get at home – in 2D or with a choice of smooth, easy on the eye 3D solutions. Sony 4K offers four times the resolution of an HD TV or previous-generation 2K digital cinema projectors.4K is the choice of audiences and industry alike, winning Hollywood’s commitment with releases from Paramount, Warner Brothers, 20th Century Fox and Sony Pictures. It’s won the support of Hollywood heavyweights like Martin Scorsese (“The Wolf of Wall Street”), Christopher Nolan (“Dark Knight Rises”, “Inception”), M. Night Shyamalan (“After Earth”), David Fincher (“The Girl with a Dragon Tattoo”), Paul Greengrass (“Captain Phillips”) and Harald  Zwart (“Karate Kid”), who have all released blockbusters in 4K. It’s also the choice of award-winning director Nuri Bilge Ceylan who won the coveted Palme d'Or at the 2014 Cannes Film Festival for “Winter Sleep” that was shot in 4K using Sony’s F65 CineAlta camera for cinematic release.The only manufacturer currently deploying 4K projection systems in volume, Sony serves many of the world’s biggest and most prestigious cinema chains, as well as small independent screens and art house cinemas.

About NT Live
National Theatre Live is an initiative by the National Theatre to broadcast live performances onto cinema screens around the world. Since its first season, which began in June 2009 with the acclaimed production of Phèdre starring Helen Mirren, almost 4 million people have now experienced the work of National Theatre Live in cinemas worldwide. In addition to the record-breaking broadcast of The Audience starring Helen Mirren as The Queen (winner of two 2013 Olivier Awards, including the Best Actress award for Mirren), recent broadcasts have included the Manchester International Festival production of Macbeth with Kenneth Branagh in the title role, Nicholas Hytner’s acclaimed production of Othello with Adrian Lester and Rory Kinnear, the Donmar Warehouse production of Coriolanus with Tom Hiddleston, in the title role, the Young Vic’s production of A Streetcar Named Desire with Gillian Anderson and Skylight from the West End with Bill Nighy and Carey Mulligan.

About VUE International
From its inception in May 2003, Vue became a worldwide operator and developer of modern, innovative multiplex cinemas. With the acquisition of Apollo Cinemas and the takeover of CinemaxX (Germany and Denmark) in 2012, the acquisition of Multikino (Poland, Latvia and Lithuania) in 2013, and most recently Space Cinemas (Italy) in 2014, Vue Group today operates 1,741 screens at 187 state-of-the-art multiplex cinema locations in 9 countries, namely the United Kingdom, Ireland, Germany, Denmark, Poland, Latvia, Lithuania, Italy and Taiwan.

NEP Visions HD1
From the Stage to the Big Screen
National Theatre Live to ...oadcast