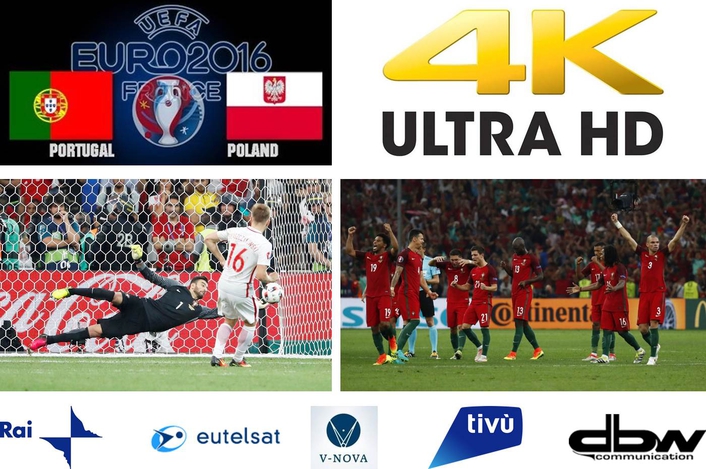 The tense Euro 2016 quarter final between Poland and Portugal made history in Italy, marking the kick-off of seven matches that national public broadcaster Rai is offering TV homes in Ultra HD.

Said to represent the next big leap forward in broadcasting, the Ultra HD broadcasts were delivered to Tivùsat homes, equipped with an Ultra HD screen and a CAM certified by Tivùsat, by Eutelsat’s HOTBIRD satellites.

Images of the football match were filmed by 14 Ultra HD cameras located at the Vélodrome Stadium in Marseilles and sent to the International Broadcasting Centre (IBC) in Paris where they were forwarded to Eutelsat’s Paris-Rambouillet teleport. A temporary studio set up by Rai at the teleport added live commentary, after which the special Rai 4KTV channel was encrypted and uplinked to Eutelsat’s HOTBIRD satellites.

The broadcasts also involve the support of industry-leading technology partners, including DBW COMMUNICATION and V-Nova that is providing the P.Link 4K, a software-based contribution encoding and decoding system that can contribute the highest signal quality from the IBC.

The coverage will be followed on 1, 2 and 3 July by the three other quarter finals, the semi-finals on 6 and 7 July and the final match on 10 July. Eutelsat added that these live broadcasts of European Championship matches constitute Italy’s most significant broadcast of live sport in Ultra HD and prefigure the launch of regular channels. The satellite firm says that with the take-up of Ultra HD screens in Italy expected to hit one million units by the end of 2016, the market for higher resolution TV is rapidly taking shape.