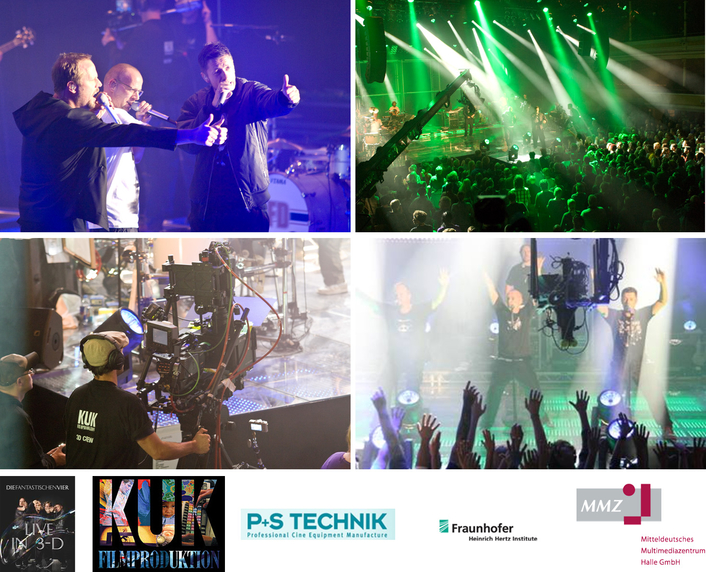 Freestyle Rig and Standard Rig Supplied for Live Broadcast of a 3D Concert of “Die Fantastischen Vier” to 91 Cinemas
P+S TECHNIK, a manufacturer of 3D beam splitter rigs, supplied its groundbreaking Freestyle Rig and its Standard Rig for the largest live coverage of a 3D concert event ever. The concert by "Die Fantastischen Vier", Germany's leading hip-hop group, was broadcast live in 3D by satellite to 91 cinemas across Germany, Austria, Switzerland, Luxembourg and Belgium.

The pivotal modules in the whole recording-replay broadcast chain are the stereo 3D rigs used. The Freestyle Rig is especially designed to offer a maximum of creative choice for camera movement in 3D production and has been used on Steadycam systems on a couple of live transmissions in collaboration with SKY (Football Champions League, Ice Hockey World Cup etc.). In this case the Freestyle Rig with its integrated motors for stereo base and angulation adjustment has done a great job mounted on a Technocrane 30. It carried Sony HDC-P1s with 10mm Zeiss DigiPrime lenses.

Shooting and processing high-quality 3D content is a huge challenge for production teams. Perfect settings of stereo parameters and camera settings are absolutely critical for perfect stereo quality. As the orientation of the two cameras may vary from scene to scene depending on scene content, near and far objects, the convergence plane and the depth of focus a couple of precise adjusting mechanisms compatible to common lens control and automatic assistance systems are crucial. 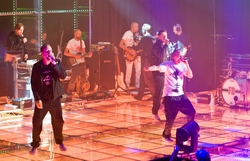 Both the Freestyle Rig and the Standard Rig are very well prepared for such demanding jobs. The rigs have been operated by the KUK-Film crew, which was supported by Carlos Alvarez from P+S TECHNIK. The operators and stereographers have also been supported by the Stereoscopic Analyzer Assistance System (STAN) developed by the Fraunhofer Heinrich Hertz Institute that computed stereo parameters and camera settings.

Andreas Dasser, Managing Director of P+S TECHNIK stated: „ As innovation leaders we are very proud of playing an important role in the world's first 3D broadcast of a live concert to 91 cinemas across Europe. Once again P+S TECHNIK advanced 3D stereography for broadcast and cinema together with other pioneers in the field. Thereby, we proved our rigs’ excellent performance during live events to broadcast.”

The live broadcast took place on September 28, 2010 during the two and a half day innovation congress "Forward2Business: The Magic of the Third Dimension" (27. to 29. September 2010), organized by and at the MMZ Mitteldeutschen Multimediazentrum Halle/Saale, Germany.

P+S TECHNIK, founded in 1990 and headquartered in Ottobrunn/Munich, Germany, has earned a reputation as a competent and professional partner for solutions and products of the highest level in the cine world.
Since 2006, P+S TECHNIK develops and manufactures Digital Cinema Cameras and Highspeed Cameras in cooperation with cinematographers and professional hardware and software developers such as Silicon Imaging, WEISSCAM, IRIDAS and CineForm.
Since 2008, P+S TECHNIK is dedicated to advancing realistic 3D stereography for broadcast and cinema together with pioneers in the field, such as Alain Derobe and Philippe Bordelais. By providing 3D Stereo Rigs to suit for anyone and for every occasion P+S TECHNIK has become the worldwide market leader in providing 3D camera systems.
Thanks to the constantly cultivated close relation with our key clients and experienced Directors of Photography and our consistent innovation ability we are pioneer developers in the field of digital cinematography technologies and make the best technologies even better. This philosophy leads to the development of tools to capture more and more superior and spectacular images which are really exceptional.