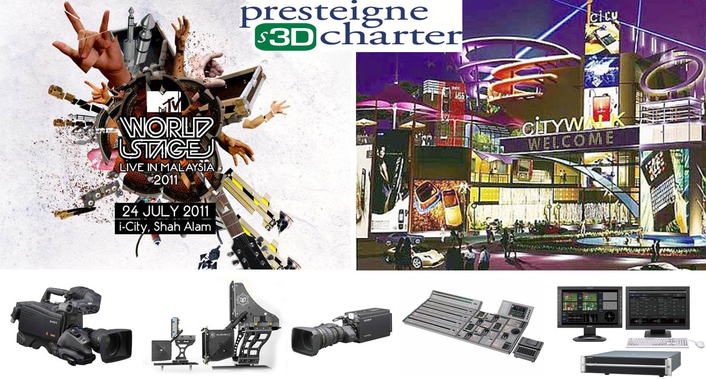 Presteigne Charter will be able to supply both a 2 and 3D programme mix from a single production facility
MTV World Stage is a global series that brings multi-genre talents with global relevance to an audience in over 550 million households. The events are recorded “live” at the most exclusive gigs, world renowned music festivals and unique concert locations from around the world.

This year Presteigne Charter will deliver a first for MTV in Southeast Asia, providing MTV World Stage Live 2011 with their first ever multi camera 3D production.

Danny Duijs, General Manager, Asia-Pacific comments that “MTV World Stage is one of the premier music events of the year in Asia and Presteigne Charter are very happy to be working closely with MTV Asia to realise their first multi-camera 3D production.”

“MTV World Stage Live in Malaysia gets bigger every year, so it's fitting that in our third year we go 3D with the production.  Watching music events in HD and 3D truly add to the overall experience, and it's exciting to take World Stage to this next level,” said Sari Trisulo, Senior Director, Content and Music, Viacom International Media Networks Southeast Asia and Greater China and Executive Producer of MTV World Stage Live in Malaysia. “We’re thrilled to up the viewing experience for our young audience by capturing the best in MTV’s live music entertainment with international, regional and local artists in 3D, fueled by the electrifying energy of 15,000 Malaysian fans.”

The native 3D Sony MVS-8000X vision mixer will sit at the heart of the production with 3D monitoring provided by Sony LMD-2451TD & 4251TD passive LCD monitors. 14 left and right eye HD signals will be recorded to EVS XT (2) and file management via IP Director and X-File (2).

Danny Duijs, comments “We believe music events are ideal for 3D production and after being involved in the UK on JLS Live and coverage of the Blue Man Group in Japan there is clearly an appetite for 3D productions in this genre. The continued success and uptake of 3DTV will fully depend on compelling content being produced by broadcasters like MTV Asia and we are happy to be working closely with MTV to achieve this.

Sari Trisulo, returns as Executive Producer for the second year of MTV World Stage Live in Malaysia. The production will be directed by Marcus Viner who is armed with over 20 years’ experience in the live music industry. His 3D director credits include Isle of Wight Festival in UK, Kylie Minogue’s Les Follies concert tour and more.