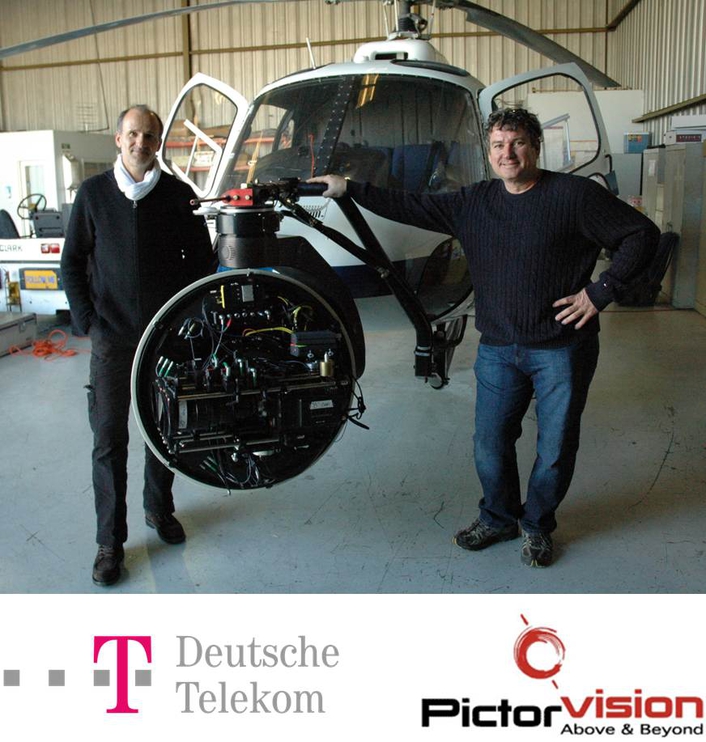 Pictorvision Eclipse Rig with Pilot Fred North (left) and Director of Photography, Vern Nobles (right)
Pictorvision announces that their state-of-the-art Eclipse 3D aerial system was recently flown carrying a pair of RED ONE M-X cameras for a Deutsche Telekom (the parent company of T-Mobile) package of spots called “A Thousand Little Things.” Directed by Paul WS Anderson (Event Horizon, Resident Evil series and the upcoming re-make of The Three Musketeers), the spots were shot in Berlin and Los Angeles by Director of Photography Vern Nobles.

“I’ve built other aerial 3D camera systems using other gyros but it has always been a compromise,” explains Nobles, who used the Eclipse for the first time on these spots. “None of them were capable of holding the 3D camera package as stable as the Eclipse. There is too much mass to use physical gyro systems and other systems can’t look straight down. We needed to shoot as slow as 1fps for time-lapse ramping and no other system was stable enough to do it. Thanks to Tom Hallman and his team at Pictorvision, we had the perfect system to do everything from high speed to time lapse and more for this high-profile commercial series.

“We even had one shot to look backwards rotating 180 degrees when looking straight down, then tilting up to look forward, flying between the downtown Los Angeles buildings,” Nobles adds. “The mount did it over and over again perfectly. The stability, advanced tracking systems used also make it the perfect solution for VFX, and with the world of CG so key to many productions, a lot of my aerials are for VFX – and now Pictorvision for support.”

Nobles’ hellicopter set up included Pictorvision’s Eclipse 3D and a pair of RED ONEs (with M-X sensors) and Angenieux 17-80mm zooms. The Deutsche Telekom spots are being shown both in theaters as well as on television in Germany and Europe.