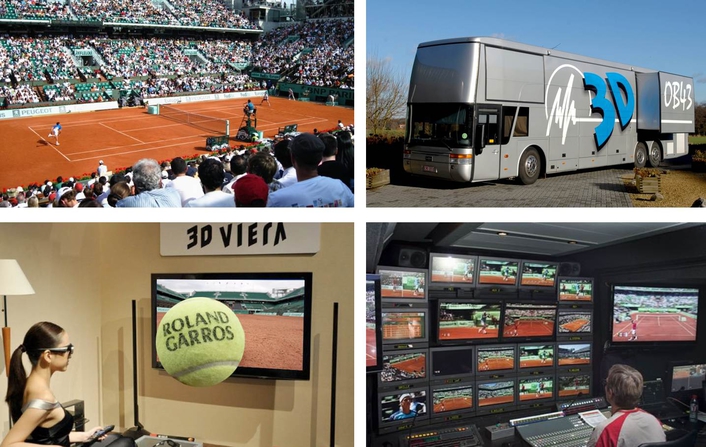 Alfacam covered Roland garros in 3D for Panasonic
Wimbledon’s 3D broadcast might have grabbed many of the recent headlines, both for the BBC and for Sony, but Panasonic was there first in its own major tennis championship test lab at the French Open, capturing 10 hours of coverage a day for more than two weeks writes Andy Stout for SVG Europe

“The challenge was combining so many systems into the workflow”, comments Markus Naegele, IT Integration Product Manager, Panasonic AV Systems Europe. “We had the A1 in use, we had the engineering sample of the new P1 in use, and we had rig systems in use, so we had all possibilities when it comes to shooting 3D.”

Panasonic worked with Belgian OB specialist Alfacam on the project, kitting out one of their trucks for working in 3D. “In the beginning there was a lot of work to be done to integrate the 3D technology and bring everything up to spec, but finally there was no problem,” says Naegele.

As well as four conventional rig systems mounting Panasonic cameras, two of the company’s camcorders were used: the first generation AG-3DA1, placed at the centre-top, and one of the first shoulder-mount AG-3DP1s to emerge intact into the world. As such, it was an important testing ground for the unit, which is expected to have a full release in October. 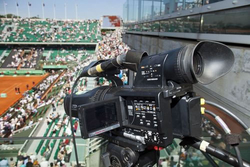 “The P1 was great,” says Naegele. “I saw some pictures after two weeks when the camera was completely wrecked from the dust from the courts, but I talked to the operational staff and everyone was happy. It’s small, it’s flexible, the handling is nice, and using it is like shooting with ENG camcorders.

“What we learned during the two weeks was that first of all shooting 3D for sports events is getting easier all the time,” he continues. “With the Panasonic cameras you are so flexible which means you can cope with the unexpected, which happens all the time in sports. The overall integration is getting better too, with more and more solutions available from multiple vendors that enables you to produce 3D in several ways.”

Roland Garros was part of a wider 3D testing programme from the manufacturer that encompasses everything from opera to volleyball, and includes the use of some intriguing-sounding in-car 3D cameras being developed for motor-racing use.

“My next challenge is to get good images from diving: people jumping down off the tower, splashing into the water and seeing that splash in 3D,” says Naegele.

Diving aside, as part of a multi-year deal, Panasonic will be at the French Open again next year, where hopefully it will have come up with a way to keep the clay courts from wreaking havoc on its equipment, but is it too early yet to talk about the Olympics?

“Yes, it is too early!” he says unequivocally, though he has the grace to laugh while he says it. “We are currently having some discussions, but it is too early to say anything.”