Panasonic, the IOC and the OBS announced their partnership to make the London 2012 Games the first ever live 3D Olympic Games
Worldwide Olympic Partner, Panasonic has already been supplying and installing huge 33.6m² ultra bright outdoor LED screens for the London 2012 Olympic Games countdown events taking place at London’s Trafalgar Square.  Since the two year and one year to go proceedings, Panasonic has continued its support by supplying scores of huge screens ranging in size from 14m² to 52m² for the London Prepares test event series that feature exciting sports ranging from BMX and basketball to hockey and beach volleyball.

Although they are the largest Panasonic screens, it’s not just the outdoor LED displays Panasonic is supplying as an abundance of plasmas are transported and installed inside various Olympic venues to supplement spectator experience with audience interactions, action replays, course overviews and other thrilling Olympic visual content.  Famous for their incredibly sharp picture quality and deep contrasts Panasonic professional plasma displays supplied include the vast 152” TH-152UX1 4K2K plasma often described as ‘the world’s largest TV’ along with numerous 103” TH-103VX200 plasmas.  Director of Panasonic UK’s London 2012 Olympic Programme, Ralph Higson, commented “This is a really exciting time in the build up to the London 2012 Olympic Games and allows Panasonic to demonstrate its incredible large screen technology whilst helping sharing the passion of the Olympic Games with everyone.” 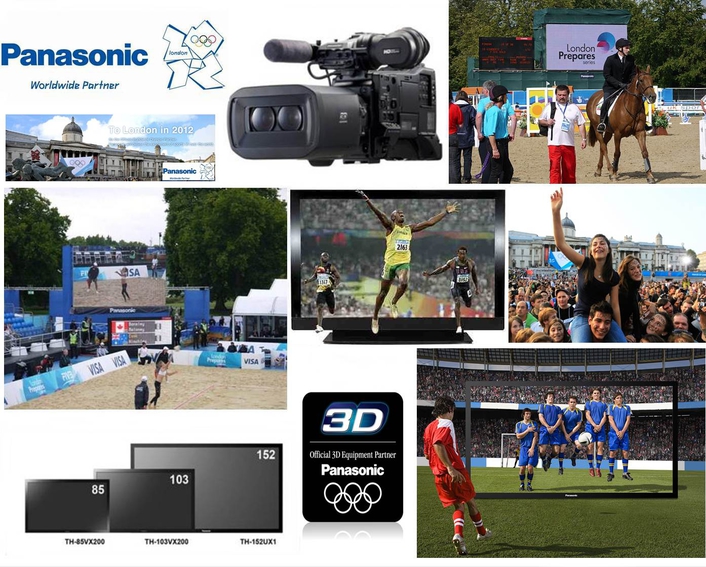 Panasonic, the IOC and the OBS recently announced their partnership agreement to make the London 2012 Olympic Games the first ever live 3D Olympic Games with over 200 hours of 3D coverage planned for broadcast.  This is possible with the help of Panasonic 3D production technology which includes 3D cameras like the AG-3DP1, Full-HD 3D camera recorder.  The plasma screens supplied by Panasonic are also capable of displaying 3D images to viewers and although it hasn’t yet been announced exactly where some of those 3D plasmas will be located around Olympic sites Vincent Slevin, UK Country Manager of Panasonic’s professional display division said; “places where our 3D technology can be showcased like the Olympic hospitality centre could be ideal locations.  We have already agreed to install three 152” 3D ready plasmas and a further forty two 103” screens which will be hung from flying brackets mounted around Olympic stadia ceilings and used as ‘repeater screens’ so that people will be able to enjoy the Olympic Games from all views in full high definition however close or far their seat is to the action.”

As the excitement around the Olympic Games builds, it’s clear that Panasonic the Official Worldwide Olympic Partner in the Audio and Visual Equipment category will be present with big screens every step of the way so that people around the world can truly share the passion and see for themselves every detail of the London 2012 Olympic Games.