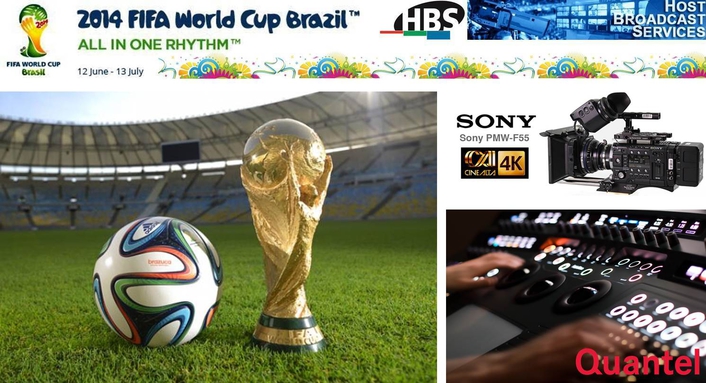 The Quantel GE2 system, which includes two Pablo Rio 4KO color correction and finishing systems sharing storage and workflow via a GenePool, will be used for the production of fast-turnaround 4K highlights packages. These will be distributed to broadcasters and Sony Stores worldwide as well as being displayed on 4K super-screens in fan parks around Brazil. The Quantel system will also be used for the post production of the Official FIFA World Cup™ film in 4K Ultra HD.

The Quantel system will work with 4K 60p XAVC media recorded on either the Sony PMW-F55 cameras being used by FIFA Film crews throughout the competition or the Sony Servers used for the 4K Live Production of three matches played at the Maracana Stadium in Rio de Janeiro (one in the round of 16, one quarter final and the final itself). All XAVC media will be instantly available for viewing and editing on the Pablo Rio color and finishing systems thanks to their ability to begin work immediately with soft-mounted media without transcoding or importing. The Quantel system will also record live 4K 60p via Quad 3G SDI, which can be edited even while recording. The Pablo Rios will be equipped with Fraunhofer IIS’s integrated easyDCP toolset for production of cinema deliverables.

According to Sony’s World Cup 2014 Programme Manager, Mark Grinyer, the choice of Quantel GE2 and Pablo Rio systems for 4K post production was straightforward. “The chosen system needed to handle 4K 60p in realtime, reliably and to produce the finished highlights packages quickly and efficiently. Quantel users have already proven on many real-world projects that Pablo Rio and the Genetic Engineering 2 shared workflow can comfortably handle 4K 60p and beyond. This made Quantel a natural choice for this demanding application.”