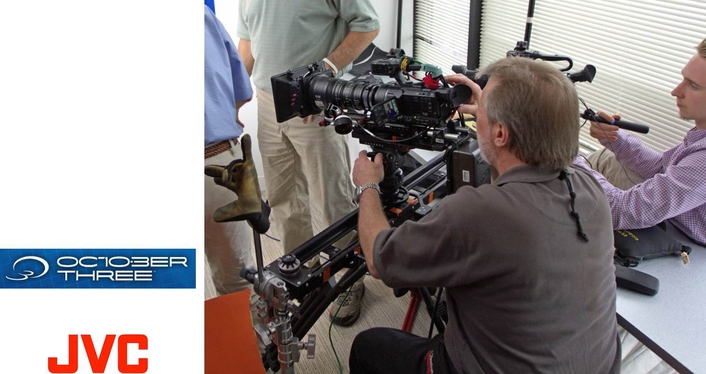 The three-day shoot in May was shot at October Three’s offices in Willis Towers and surrounding locations in Chicago. Kevin McCormick, director of communications for October Three Consulting, served as producer and director for the project. Although the piece will be featured online and sent to prospective clients via e-mail, he decided to shoot in 4K for the ability to push in on subjects in frame without losing resolution in post.

“Because October Three is on the cutting edge of retirement technology,” he added, “it only seemed reasonable to have our media follow the same trajectory. I made the decision to go with JVC because of my many years of positive experiences using their products, along with their commitment to quality and excellence in the broadcast industry.”

McCormick saw the GY-LS300 at the 2015 NAB Show and was intrigued by its price point, convenient form factor, and Variable Scan Mapping technology, which adapts the active area of the 4K Super 35 CMOS sensor to accommodate a wide variety of lenses and mounts. “What really piqued my interest was its sheer versatility,” he said. “The camera had all the features any DP would expect in a cinema camera.”

While not his first time shooting in 4K, it was the first time Steve Herrlin, who served as director of photography for the project, used the GY-LS300. Based out of Chicago, Herrlin has spent more than 30 years as a freelance DP/lighting cameraman on corporate, commercial, and documentary projects. “I was really encouraged with JVC’s 4K cinema camera,” he recalled. “A full-size Super 35 sensor combined with the lens options of a Micro Four Thirds lens mount – that combination sounded pretty powerful.” 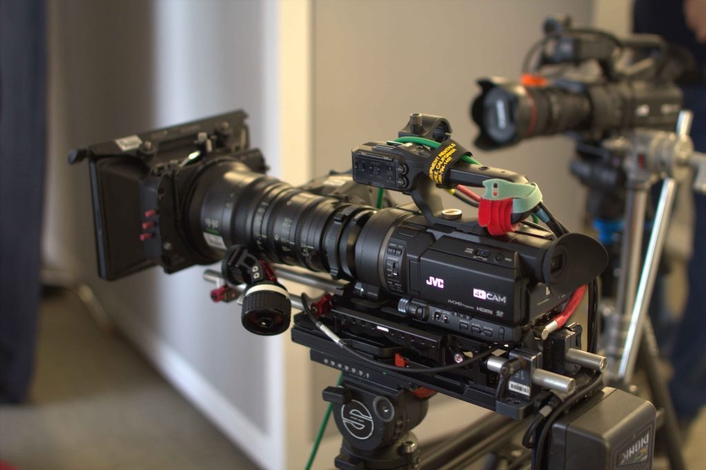 “There were numerous lighting challenges, as we were trying to capture the beautiful Chicago cityscape out the window as a backdrop without shots being too washed out,” explained McCormick. “I was also aiming for a shallow depth of field look to make the video more cinematic. With limited time to pull all the pieces together, the JVC 4K cameras helped us get the shots we needed quickly and efficiently.”

Herrlin was impressed with the GY-LS300’s operation and results. “The menu was definitely refreshing and intuitive. I didn’t get lost – the menus made sense to me, more so than a lot of other cameras,” he said. “I was really happy with the color matching. The images were beautiful, there was zero artifacting, and exposure latitude was at least if not better than what I was expecting.”

McCormick said there have been no problems editing the 4K files with Adobe Premiere, but cautioned others not to underestimate the system requirements for 4K editing. “You need to make sure your editing equipment can handle the throughput of two angles in 4K,” he noted. “It’s a lot of processing and bandwidth.”