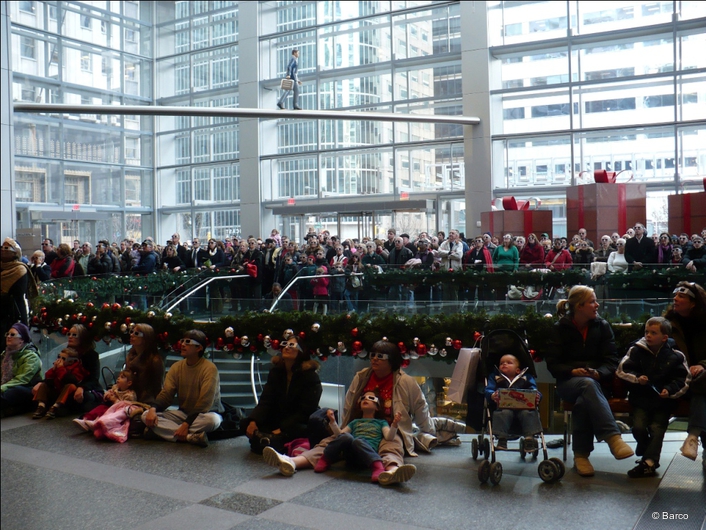 The Comcast Experience in Philadelphia
Founded in 1986 by designer DAVID NILES, the Niles Creative Group creates and produces original programming for numerous on air networks and fortune 500 companies. Instrumental in developing new technologies and concepts, the company designs and executes large format projects from start to finish for companies that include Comcast, Radio City Music Hall, Federated Department Stores, Panasonic, Walt Disney / Imagineering and Madison Square Garden. At the Niles Creative Group, the overriding goal is to make a difference, and leave a mark. The Niles Creative Group has produced the world's first daylight-viewable 3D presentation, using The Comcast Experience as its palette — the world's largest Barco NX-4 display. With standing-room-only crowds in attendance at Philadelphia's Comcast Center, the 18-minute 3D Christmas Spectacular runs hourly through the end of the year.

The Comcast Experience in Philadelphia is the world's largest indoor four millimeter LED display, comprised of 6,771 Barco NX-4 LED modules. For Comcast's 2009 Christmas Spectacular, the Niles Creative Group takes the 10-million pixel Barco LED wall into the next dimension, with the production of the world's first daylight-viewable 3D experience.

Since its grand opening in June 2008, The Comcast Experience has awed the public with remarkable large-scale sound and graphics, and fulfilled Comcast's goal of transforming a public transportation hub into the city's artistic focal point. For this year's Christmas Spectacular, Comcast again enlisted the talents of the New York-based Niles Creative Group to take the presentation to the next level — specifically, 3D. For David Niles, founder of the Niles Creative Group, the task was challenging on many levels: how to produce a show in 3D at five times the resolution of high-definition television, how to switch the LED wall between 2D and 3D playback, and how to achieve the level of brightness and contrast required to properly display 3D in broad daylight.

“The creation of a stereoscopic 3D image is the more difficult part of the puzzle, but that's exactly what we do here,” said Niles. “The next part is the technology to actually display it, and here's where we're breaking barriers. Creating effective 3D in a daylight environment is a challenge, and to that end, we have to give credit to Barco's 4mm LED screen. It has a light output high enough, and a contrast ratio great enough, to be able to use the anaglyphic display method.”

To solve the technical challenge of compositing a dual stereoscopic image into a single anaglyphic image that the LED wall requires, Niles partnered with Sirius 3-D, the creators of the ColorCode 3-D system. “They've perfected a blue-yellow anaglyptic method of encoding which is quite spectacular, and which preserves colorimetry,” explained Niles. “Even in broad daylight, the results on Comcast's existing, unmodified 4mm wall are beautiful.” 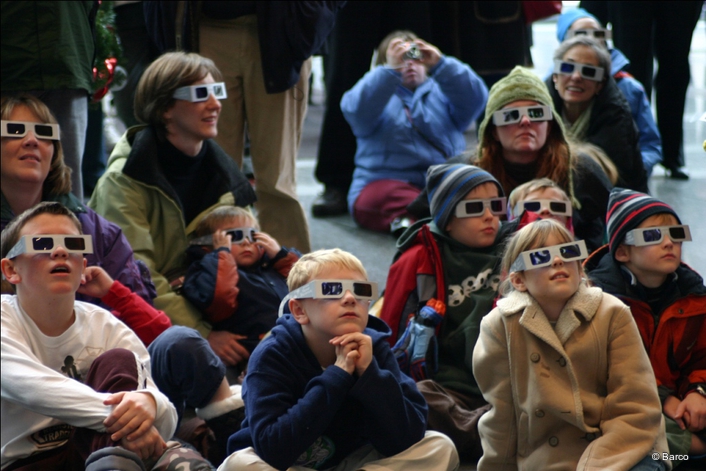 The Comcast Experience in Philadelphia

For the challenge of switching the wall between 2D and 3D playback modes, the video system itself at The Comcast Experience accomplishes the task. “Using our content delivery system, we were able to program changes into the way the wall operates,” said Niles. “When the Christmas Spectacular is running, we increase the wall's output level to make it optimum for anaglyphic viewing. Then, as soon as the 3D Christmas show is over, the wall returns to its normal viewing levels.”

Comcast's Christmas Spectacular opened just after Thanksgiving, and to date, the attendance numbers have been remarkable. For a four-day period, over 50,000 people enjoyed the program, and higher numbers are expected throughout the remainder of the year. “The Niles Creative Group is truly at the forefront of extraordinary photo-realistic environments,” said Steve Scorse, Vice President of Sales and Marketing for Barco. “Using our NX-4 wall, he's demonstrated that LED is a viable technology for large scale 3D presentations, and moreover, ones that can take place in a daylight environment.”