NHK Research Organisation to be Honoured by IBC

Super HiVision Installations in London for the Olympics
IBC will present its highest honour, the International Honour for Excellence, to NHK Science and Technology Research Laboratories (STRL) at the IBC to be held in Amsterdam in September. Japanese public service broadcaster NHK has been foremost in developing new techniques and technology for broadcasting since its formation in 1930 and again will play an important role this summer by producing some of the Olympic Events in Super HiVision.

The IBC International Honour for Excellence is presented each year to an outstanding individual or organisation who has fostered or contributed to the relationship between technology and creativity in the broadcast, movie or media industries. In 2011 the award went to Sir David Attenborough; previous recipients have included Director James Cameron, Aardman Animation, Manolo Romero, Managing Director, Olympic Broadcasting Services and the BBC Natural History Unit.

Having recently celebrated its 80th anniversary, NHK Science and Technology Research Laboratories has been at the forefront of research in broadcasting technology, working on both practical solutions to current issues and visionary future technologies which transform the way professionals create content and audiences enjoy it. NHK STRL pioneered high definition television as we know it today, including the development of plasma displays. It has recently been awarded an IEEE Milestone Award for the world’s first direct to home satellite broadcast service in 1984. 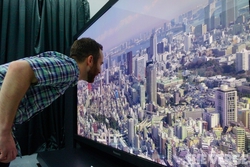 Among its many current strands of research is Super Hi-Vision, its implementation of high resolution broadcasting which offers a screen resolution 16 times greater than today’s HD, together with 22.2 channel immersive surround sound. NHK STRL engineers are working on the complete chain, from high resolution high speed CMOS cameras through recording and transmission equipment to screens and projection displays.

It is also addressing the second screen, helping a consortium of broadcasters launch an experimental service, Hybridcast, which synchronises content on a tablet with the programme on television.

“The contribution to broadcasting technology made by NHK cannot be underestimated,” said Peter Owen, Chair of the IBC Council which is the body responsible for making the award. “Their work has always been revolutionary, but equally important NHK has been generous with its efforts, collaborating with international bodies like the ITU, ABU and SMPTE, along with its contribution to global standards like MPEG.

“Our industry is exciting and fascinating because it brings together creative talents with technological visionaries, and each side needs the other to spark new ideas,” Owen added. “This is the right time to recognise the many ways that NHK STRL has enabled better broadcasting and ultimately continued to delight consumers.”