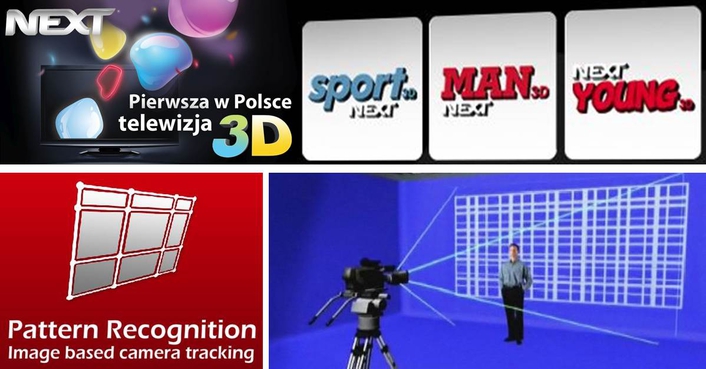 NEXT TV will be producing 3 channels that will be in full 3D HD
With Orad's innovative broadcasting technology, Polish broadcasters, NEXT TV have broken new ground by broadcasting from a permanent, stereoscopic, virtual studio.

By combining Orad's Virtual Studio and Stereographic solutions, NEXT TV can easily set up their stereoscopic production. NEXT TV's Panasonic cameras produce two 1080i signals for each eye. The camera data is then tracked by Orad's DVP which calculates the cameras' positions directly from the Panasonic camera. A single Orad HDVG is configured to produce and key internally separate 1080i left and right eye signals. Orad’s’ unique stereo controller then allows the operator to ensure an exact match between the stereo properties of the virtual studio and the real studio.

NEXT TV will also be using Orad’s stereographic technology in its new TV station. NEXT TV will be producing 3 channels that will be in full 3D HD.

"NEXT TV is thrilled to implement such an advanced technology. We pride ourselves in providing our viewers with the most exciting and compelling broadcasts and with Orad as our partners we will continue to be on cutting edge of broadcast technology",  Karolina Szymańska, CEO, NEXT TV.