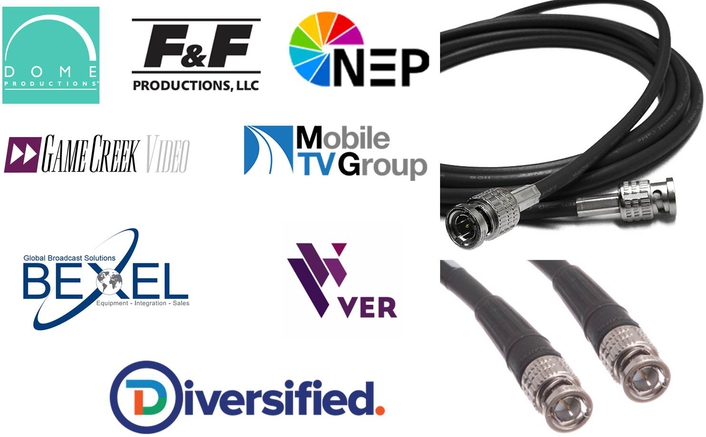 Representatives of leading remote-production-facility providers are raising awareness among broadcast-equipment manufacturers of the need for 12-Gbps SDI-over-coax connectivity per SMPTE 2082 for equipment expected to be part of a 4K and/or UHD production. The current effort includes an outreach campaign highlighted by an open letter on making 12-Gbps SDI over single coax a viable alternative to the current approach, which requires four 3-Gbps SDI signals to transport a single 4K signal, a solution the facility providers call bulky, cumbersome, and unwieldly.

“While the promise of IP for the transmission of 4K/UHDTV will improve upon these limitations, it adds a layer of complexity that is unnecessary for many small to midsize productions, particularly those employing less than 16 cameras,” says the letter. “Also desirable is the ability to monitor source signals ahead of the IP stream for troubleshooting purposes, which is now possible with the appearance of 12-Gbps 4K/UHDTV monitors.”

The call for 12-Gb SDI support is intended to make 4K production easier and more cost-effective.

The letter was the result of informal conversations between George Hoover, CTO, NEP Group, and Phil Garvin, president, Colorado Studios/Mobile TV Group, at NAB 2016 about the lack of interest in 12-Gbps connectivity by many of the manufacturers building critical components for high-end sports-TV production.

“Everybody we have spoken with, without hesitation, likes 12 Gbps as an option,” says Hoover. “It’s not intended to preclude everything else, but we would like it available as an option.”

Two of the key issues are that the current Quad HD solution has a layer of complexity and bulk that can make sports productions much more difficult — even compromised — compared with HD workflows and can also negatively impact smaller live event productions, such as touring concert productions. And, although IP-based systems hold promise for large-scale production and larger remote-production facilities, the complexity of moving to IP creates problems particularly for smaller productions and vehicles until standards for interoperability are sorted out.

“Quad HD 4K is not only cumbersome but also creates some timing issues and creates four times as many things to troubleshoot,” Garvin points out. “For trucks that are doing up to 16 4K cameras — like regional, college, and pro sports — 12-Gbps connectivity would be better than building an IP infrastructure.”

Hoover says manufacturers of infrastructure gear (such as Evertz, Imagine, Utah Scientific, and Cobalt) do have 12 Gbps-capable products in the pipeline (and others, Blackmagic Design among them, already have embraced 12 Gbps) so the real question is getting 12-Gbps connectivity on the roadmaps of camera, production-switcher, and server manufacturers.

“Our feeling is that all broadcast cameras have option slots,” he says, “so the option board that will help them accommodate IP should also accommodate 12 Gbps.”

Says Garvin, “I don’t think it will be hard for the camera guys to do this, but the router companies are in a bit of a quandary, as they have been investing heavily in IP. So the hope is, they can put some R&D back into SDI routers and increase those to 12 Gbps.”

A key development to opening up the road to 12 Gbps is Belden’s demonstration of 12-Gbps signal transport via its current mini coax cable for upwards of 150 ft. That meets the length required to help a 4K truck route 12-Gbps signals to monitors throughout the vehicle.
Early feedback from manufacturers has been positive, but Hoover (George.hoover@nepinc.com) and Garvin (pgarvin@mobiletvgroup.com) say that other production companies interested in getting involved with the effort can contact them for more information.

“We’re asking those who are interested to send a copy of our letter to the manufacturers they work with to let them know of the importance of 12 Gbps,” says Hoover. “This also will help out people doing two- and three-camera industrial shoots, stadiums and arenas, and local TV stations. Even a single-camera production on a film set that feeds the signal to a couple of monitors benefits.”