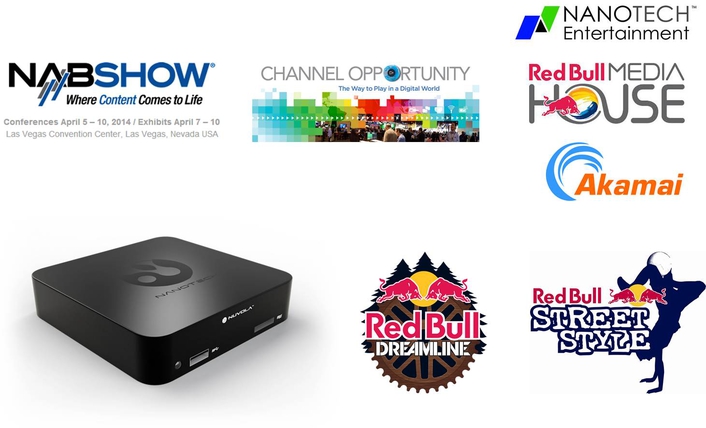 With the agreement, UltraFlix subscribers can enjoy the thrill of riding along with daredevil dirt riders in Red Bull Dreamline, the amazing acrobatics of the world's best free-runners e.g. in Red Bull X-Run and the jaw-dropping control of the top freestyle footballers on the planet in Red Bull Streetstyle, to name a few. All produced in native 4K, the Red Bull Media House films bring audiences close to the action and behind the scenes with the highest-quality production values and cinematography available.

"We are committed to making UltraFlix the digital go-to sports channel and Red Bull Media House is one of the leading sports movie producers in the world, so licensing their content was a priority for us", said Aaron Taylor, NanoTech's Executive Vice President of Sales & Marketing.

NanoTech's UltraFlix streaming service can be used to deliver 4K Ultra HD content on a variety of TVs and devices, including NanoTech's award-winning Nuvola NP-1 consumer 4K streaming media player. The Nuvola NP-1, which comes with UltraFlix and several video, gaming and social media applications pre-installed, is a multifunction device that can stream videos in HD, SD and 3D formats as well as 4K Ultra HD. Since the NP-1 is Android based, users have fast, easy website access and can also access to thousands of video games and applications from nVida Tegra Zone and the Google Play Store.

Availability, Pricing
UltraFlix, the world's first dedicated 4K Ultra HD IPTV/OTT channel is available now on the Nuvola NP-1, and will be available on a variety of other 4K Ultra HD devices and TVs later this year.

Nuvola NP-1, the world's first consumer streaming media player that supports 4K Ultra HD content, is currently in production and will be available for new customers later this quarter for $299.

The commercial grade Nuvola NP-C which supports 4K Ultra HD streaming video as well as local video playback and is bundled with 11Giraffes Digital Signage software, will be available starting next month with an MSRP of $399.

About Red Bull Media House
A global media company, Red Bull Media House produces, publishes, distributes and licenses high-quality sport, entertainment and educational programming from the areas of Sport & Lifestyle, Nature & Science and Tradition & Inspiration. Its product portfolio includes sport and lifestyle programming, documentaries, feature films, music, games and mobile apps, as well as print and online magazines that fascinate and inspire audiences all over the world through all media channels and on all types of devices.

The company's centralized media hub, the Red Bull Content Pool, provides access to high-resolution imagery and HD moving images for editorial use, as well as licensable content in the Premium section.

About NanoTech Entertainment
Headquartered in San Jose, CA NanoTech Entertainment is a technology company that focuses on all aspects of the entertainment industry. With six technology business units, focusing on 3D, Gaming, Media & IPTV, Mobile Apps, and Manufacturing, the company has a unique business model. The company has a diverse portfolio of products and technology. NanoTech Gaming Labs operates as a virtual manufacturer, developing its technology and games, and licensing them to third parties for manufacturing and distribution in order to keep its overhead extremely low and operations efficient in the new global manufacturing economy. NanoTech Media develops proprietary technology which it licenses to publishers for use in their products as well as creating and publishing unique content. NanoTech Media Technology includes the world's first 4K Ultra HD streaming solution. NanoTech Communications develops and sells proprietary apps and technology in the Mobile and Consumer space. Clear Memories is  the global leader in 3D ice carving and manufacturing technology. 4K Studios creates digital 4K Ultra HD content using both licensed materials as well as original productions. NanoTech is redefining the role of developers and manufacturers in the global market.