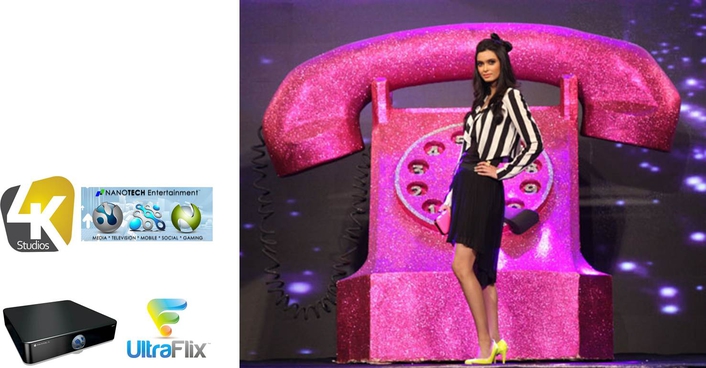 Original Content Produced by 4K Studios to be Featured on World’s First Dedicated 4K Ultra HD Network
NanoTech Entertainment (OTC Pink: NTEK), a pioneer in bringing the 4K Ultra HD experience to consumers, announced today that its 4K Studios Division will be releasing monthly episodes of new original series featuring comedy, sports, fashion and music. All of the original series content has been shot, mastered and delivered in 4K Ultra HD. NanoTech’s UltraFlix subscribers will have exclusive access to the series.

Several events have already been captured and will start appearing on UltraFlix in September. The series will kick off with the recent Allure Fashion show; a one-of-a-kind, high-end fashion event bringing dozens of boutiques and designers under one roof. The combined fashion show and musical experience features a specially choreographed runway fashion shows integrated with a high-energy music.

Other episodes include several comedians featured at many famous comedy venues including Cobb’s Comedy Club and the Punchline in San Francisco. The comedy episodes feature a variety of comics performing each month hosted by UltraFlix resident comedian Juan Carlos.

“We have been at the forefront of 4K Ultra HD production with our film scanning equipment and post production work for the past year,” said Alexander “LX” Rudis, NanoTech’s Senior Vice President of 4K Studios. “We have always had an eye towards how we can bring original content to UltraFlix and we are excited for all of the shows we are creating. By working with the entire work flow--from planning, to filming through delivery to consumers, we have been able to optimize our work flow while providing compelling original content to add to our network.”

NanoTech COO Alan D. Stone added, “As we expand the UltraFlix experience into millions of consumers’ homes on a wide variety of set top boxes and televisions, having a constant flow of content is vital. By having original content to add to our licensed content we can ensure that we continue to have the greatest library 4K Ultra HD content available anywhere. UltraFlix is truly bringing consumers The Future of Television.”

About NanoTech Entertainment
Headquartered in San Jose, CA NanoTech Entertainment is a technology company that focuses on all aspects of the entertainment industry. With six technology business units, focusing on 3D, Gaming, Media & IPTV, Mobile Apps, and Manufacturing, the company has a unique business model. The company has a diverse portfolio of products and technology. NanoTech Gaming Labs operates as a virtual manufacturer, developing its technology and games, and licensing them to third parties for manufacturing and distribution in order to keep its overhead extremely low and operations efficient in the new global manufacturing economy. NanoTech Media develops proprietary technology which it licenses to publishers for use in their products as well as creating and publishing unique content. NanoTech Media Technology includes the world's first 4K Ultra HD streaming solution. NanoTech Communications develops and sells proprietary apps and technology in the Mobile and Consumer space. Clear Memories is the global leader in 3D ice carving and manufacturing technology. 4K Studios creates digital 4K Ultra HD content using both licensed materials as well as original productions. NanoTech is redefining the role of developers and manufacturers in the global market.