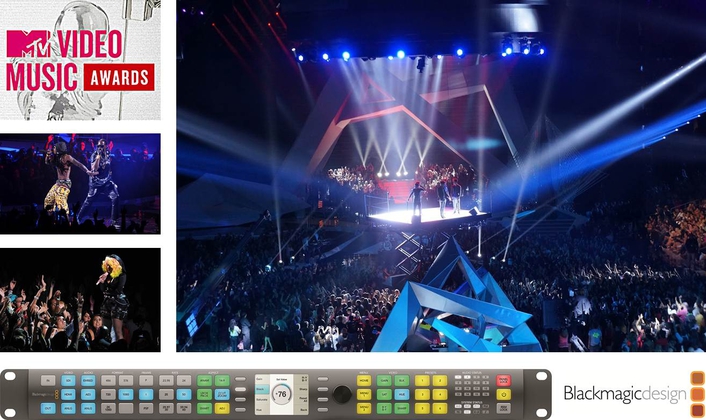 Being MTV, we didn’t want to simply play back the feed coming from STAPLES Center; we wanted to recreate the feeling
Blackmagic Design today announced that MTV used Blackmagic Design’s Teranex video processing technology for a 3D screening of the “2012 MTV Video Music Awards” (VMAs). Recorded live at STAPLES Center, MTV simultaneously broadcast the VMAs in 3D to 600 fans at the nearby Regal Cinemas’ L.A. LIVE Theater.

With Teranex’s image processing and 3D processing and simulation, MTV was able to transform a single live 2D camera feed by converting the signal to 3D in real time, creating an incredibly realistic and immersive simulation of depth for audience members.

The 1080i video feed from STAPLES Center was sent via fiber to a switcher located in the projection room of the L.A. LIVE Theater. The feed was then input into the Teranex unit, and the signal was converted from 2D to 3D, as well as converted from 1080i to 1080p as the Barco projector being used required a progressive signal, not interlaced. Additionally, the entire show was recorded in 3D on a Sony SRW5800 videotape recorder via a second Teranex unit.

“Being MTV, we didn’t want to simply play back the feed coming from STAPLES Center; we wanted to recreate the feeling of actually being there,” said Jeff Jacobs, SVP and executive in charge of production for the MTV Music Group. “The VMAs are so huge they are a spectacle of an awards show, and we were better able to recreate the intensity and feeling of actually being there for the fans by broadcasting the show in 3D using Teranex video processing technology.”

The Teranex 2D Processor is now available from Blackmagic Design resellers worldwide, with the Teranex 3D available in Q4’12.