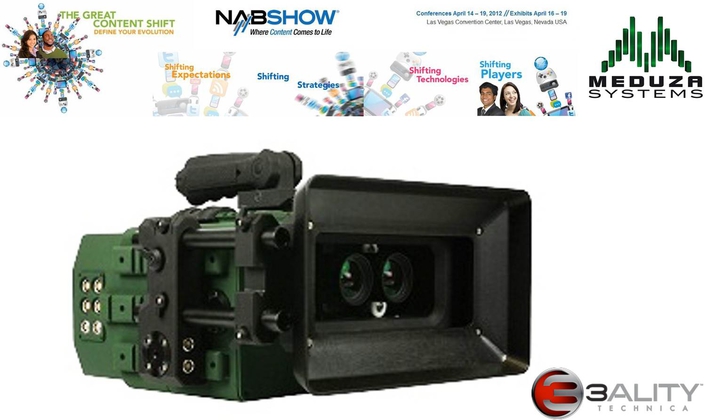 The Meduza TITAN has progressed from concept and invention to delivery in just 365 days since its unveiling last year at NAB.  “Previewing our concept for a 3D camera in 2011, was an unprecedented step,” says Cary.   “We wanted to show the industry what we were capable of and that finally someone was going to build a truly professional single camera solution.   We didn’t keep it under wraps, but brought it out for everyone to see.  The feedback we received encouraged us to add more upgradable functionality and to focus on the TITAN first and the MK 1 for later in 2012, Now, just one year later, we are excited to be working with 3ality Technica to extend the control capability of the system and will be at NAB to deliver a 3D camera that is truly capable of moving 3D television production forward.”

The perfected integrated control system from 3ality Technica provides a plug and play interface that is built directly into the TITAN and will control motorized focus, iris, convergence and IA, either with the 3ality Technica hand controller (THC) connected to the camera body, via wireless transmission, or via Bluetooth from an iPad™ or an iPhone™, using 3Ality Technica's GUI.  Featuring two 1080p CMOS sensors, TITAN is capable of both 1080p and 2k resolution as well as a full range of frame rates, from 24 fps to 60 fps in 10 bit, and has fast, fully motorized inter-axial and convergence, both essential to professional quality S3D film making.  Convergence is accurate to 1/1000 of a degree and the inter-axial to 1 micron.  At just under 5 kilos (11 lbs.), the robust and compact TITAN body is crafted from solid pieces of aluminum for lightness, water resistance and durability.  The 3ality control capability will allow the TITAN to work as a complete stand alone or fit seamlessly into existing 3ality Technica systems, providing effortless portability.

At NAB, Meduza will also feature the Delta 4K S3D Meduza Lenses, the first built for purpose, matched pair, 3D lenses.  The lens set has been designed and built to deliver super high precision, not only in the glass, but also in the motorized focus and iris controls. 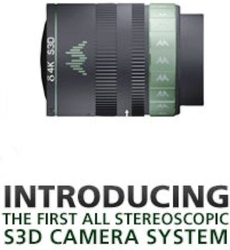 The lenses of the series are not only uniquely optically matched and sold in pairs, but each lens has been constructed to fit into a compact 38mm wide mechanical barrel to allow for very close inter-axial positioning for the Meduza cameras. The lens form factor has been upgraded by Meduza’s Chief Mechanical Engineer Al Mayer to marry with his TITAN camera system design and be more flexible in integrating with other systems.

The internal system can be controlled either hard-wired or wireless using the THC hand controllers or an IPAD™ APP readily available.  The THC includes an onboard battery mount for Sony's Info-Lithium rechargeable, as well as a Mico-SD card slot for easy firmware uploads, and convenient capture of the user’s specific parameters.

ABOUT MEDUZA SYSTEMS LTD
Meduza Systems Ltd is dedicated to servicing the growing demand within the professional film and television community for a complete and technically advanced 3D image capturing system.  The company’s objective is to develop an imaging system that solves the single camera problem within an architecture that can be constantly upgraded to keep pace with the growth of the industry and advancing technology.   The system’s requirements are versatility, flexibility, and the capability of being upgraded and adapted to match the pace of developing sensor and optical technology and to deliver visual images at the highest resolution possible at all times.  The Meduza MK I was designed to fill the void in the market with compatibility in all of the production environments and in any industry, from Giant Screen 15/70, to live events, to hand held natural history productions.  The TITAN has been created to provide a purpose built tool for the television industry.  Above all, the company’s mission is to create a stereoscopic digital 3D camera that would never be obsolete and that could constantly strive to meet the growing and changing needs of its customers.

ABOUT 3ALITY TECHNICA
Known as the company who brought the world “U2 3D” in 2007, 3ality Technica is considered the birthplace of the current 3D revolution.  Headquartered in Burbank, California, 3ality Technica is the leading innovator, manufacturer, and provider of stereoscopic 3D (S3D) production systems and technology.   The company’s product line is comprised of both hardware and software combined to produce the most accurate and advanced image processing systems in the world.   These advanced systems are widely used by leading Hollywood filmmakers, the music industry, and by major broadcasters.

2012 will see more 3ality Technica theatrical releases than any other year including the recently released “Underworld 4 Awakenings” and “The Darkest Hour.”  Upcoming Hollywood titles that have utilized 3ality Technica’s advanced S3D image systems include “The Hobbit: An Unexpected Journey,” “The Great Gatsby,” “Prometheus,” “The Amazing Spider-Man,” “Jack the Giant Killer,” and “Oz: The Great and Powerful.” Recognized as the industry leader in providing 3D production development and support on a wide array of projects, 3ality Technica is also noted for its amazingly true-to-life 3D image capture for artists such as the Black-eyed Peas, Britney Spears, and Kenny Chesney.