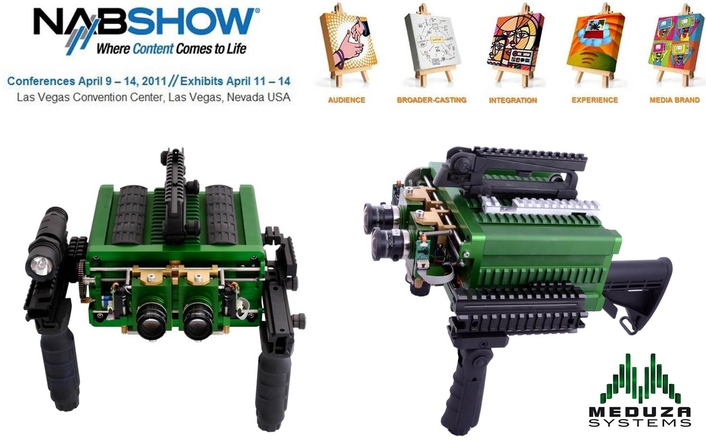 The Meduza is Recognized for its Innovation and Technical Excellence
The Meduza, the first single beyond 4K digital stereoscopic 3D (S3D) camera ever developed, unveiled by Meduza Systems at the National Association of Broadcasters Convention (NAB) last week in Las Vegas, is the recipient of the 19th Annual Mario Award given by TV Technology Magazine. The announcement was made today by Chris Cary, CEO, 3D Visual Enterprises, the UK based parent company of Meduza Systems. Mario Awards are given out annually by TV Technology Magazine, the industry’s leading magazine for technology news, at the NAB convention to companies that demonstrate forward thinking and technical excellence in their products.

“We are very honored to receive the Mario Award,” says Cary. “To be recognized as an innovator, one of only 10 Mario Award recipients amongst the hundreds of products presented at NAB, is truly rewarding and exciting for us and our talented team of engineers and designers.” A new and innovative technology, The Meduza Camera System places the art of filmmaking back at its source, in the hands of producers, directors, cinematographers and filmmakers.

The Meduza is a ‘digital imaging system’ that sets a new benchmark standard for stereoscopic 3D image capturing. It can be set up in minutes, not hours, has interchangeable lenses, precise remote controlled variable inter-axial (the distance between the lenses) and precise remote controlled convergence. It is a single camera, with a single set of electronics and a single set of controls that powers 2 imaging sensors at the same time. All of this and the entire camera weighs less than 15 pounds.Established to recognize manufacturers whose products represent significant technical breakthroughs, the awards are named after Mario Orazio, a pseudonym for a nameless engineer who pens TV Technology’s widely read column ‘The Masked Engineer.’ “Mario scours the NAB show floor for the 10 most innovative products that represent the pinnacle of technical achievement, ’” says TV Technology Editor Tom Butts.

Films currently produced in 3D are generally shot with 2 cameras linked together with stereoscopic grip equipment or 2 cameras sandwiched in one camera body with very little control or synchronization. “A simple analogy would be, if you glued 2 motorcycles together, would this produce a car?” says Jonathan Kitzen, President of Meduza Systems. “While left eye and right eye images are generated using 2 cameras, many more new problems are created, which must then be corrected in post-production, leading to data loss, image aberration and expense.”

“The Meduza is the route to the ultimate solution,” says Cary. “This is a completely new approach to the very specific needs of stereoscopic 3D content creation. Compact, flexibility in resolution, a variety of sensor configurations and shooting frame rates and precise controls of inter-axial and convergence make it a must have asset for all 3D work from sports and natural history, to feature films and live events.”

3D Visual Enterprises Ltd, the UK based holding company, was established specifically to service the growing demand within the professional film and television community for a complete and technically advanced 3D image capturing system. Meduza Systems was created to develop an imaging system that would solve the single camera problem within an architecture that could be constantly upgraded to keep pace with the growth of the industry and advancing technology. The system had to be versatile, flexible,capable of being upgraded and adapted to match the pace of developing sensor and optical technology and to deliver visual images at the highest resolution possible at all times. The Meduza was designed to fill the void in the market with compatibility in all of the production environments, from Giant Screen 15/70, to live events, to hand held natural history productions. Above all, the company’s mission is to create a stereoscopic digital 3D camera that would never be obsolete and that could constantly strive to meet the growing and changing needs of its customers.