The 3D team included 40 staff and a total of seven double camera positions
For the very first time, 10 countries broadcast the match in 3D - 30 cameras and a team of 300 guaranteed the very best coverage of the match in 2D and 3D broadcast around the world.

The entire planet was eagerly awaiting one of the biggest events on the sporting calendar, the Real Madrid FC Barcelona match. The international signal was produced by MEDIAPRO and was relayed worldwide in HD and for the first time in 3D for seven European networks. Thanks to the agreements signed by MEDIAPRO, all the excitement and spectacular image quality of 3D could be seen on Canal+ France, JCS Israel, Sky Italy, Canal+ Poland , Sky UK, Canal+ Sweden and BETV Belgium, which launched its 3D broadcasts with the match. The match could also be seen in 3D in cinemas in Hungary, the Czech Republic and Slovakia as a consequence of the agreement signed with Chello, who manages 3D cinemas in Eastern Europe.

Enormous deployment for the 3D production

MEDIAPRO made a huge effort to produce one of the most eagerly awaited games of the season in 3D. The 3D team included 40 staff and a total of seven double camera positions set up on five robot-controlled rigs (two mirror set-ups with three in the side-by-side format), plus a fixed rig and a autonomous camera supplied by MEDIAPRO partner Kronomav.

The entire match was produced in 3D and no automatic conversion of images from 2D to 3D was used. An outside broadcast van set up for the production of the signal in 3D was deployed in the Santiago Bernabéu and the 3D graphics were also inserted in real time.

A 300-man team, 30 cameras in the ground, 13 for the exclusive use of LaSexta and seven outside broadcast units ensured the very best broadcast picture quality for the Real Madrid FC Barcelona match in 2D. 12 cameras were situated pitch-side, two of which were Super Slow Motion, an Omnicam and for the first time in the Spanish League, a Spidercam. This type of camera allows the camera to move both horizontally and vertically over a predetermined area of play. Other cameras belonging to Telemadrid, TV3, BSKYB, ESPN, Canal+ Francia, Direct TV and Al Jazeera allowed the signal to be customised for the channels.

MEDIAPRO relayed the international signal to the whole world as well as producing the match with Dani Lozano leading the production team. The UK, France, Italy, Germany, the Gulf States, the USA, South America, Mexico, Singapore, Hong Kong, China, Australia, Japan as well as large parts of North and West Africa, among others, saw one of the most eagerly awaited encounters of the sporting calendar. More than 40 channels from both home and abroad were at the stadium to cover the match. The potential worldwide audience was in the region of 400 million people with a real audience of 100 million.

All the excitement of 3D pitched up in Barcelona sponsored by SEAT with the screening of the league match between Real Madrid and FC Barcelona using this new, spectacular technology. Media Sports Marketing, a MEDIAPRO group company, was responsible for the organisation of this exclusive event which saw 250 people in attendance.

The auditorium in the IMAGINA building in Barcelona played host to the event for the screening of one of the most eagerly waited events on the sporting calendar. A big screen and Dolby 5.1 surround sound, with no additional commentary, gave guests an incredible viewing experience beyond even being in the stadium.

The 3D signal was broadcast live from the Santiago Bernabéu Stadium via fibre optic cable in side-by-side format, to screen the images in a digital DCI projector and watched using active 3D glasses. The broadcast was carried out in Dolby 5.1 sound, without additional commentary.

Over the course of the season Media Sports Marketing has organized the 3D broadcast of high-profile games from the BBVA League, in the away team’s city in selected emblematic buildings. 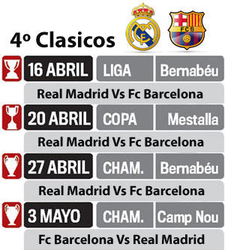 The Real Madrid FC Barcelona match was shown at the best cinemas around Spain in HD with Dolby Surround sound. Twelve cinemas in Spain were set up to host the event.

The HD broadcast allowed viewers to enjoy all the excitement of football on a big screen with high quality images. In addition, the Dolby Surround sound without commentary allows viewers to submerge themselves completely in the match, and capture sounds such as the ball being struck by the players or the shouts of the crowd, impossible to appreciate even in the stadium.

Three more Barca vs. Real matches will follow in April and May – the heat is on.