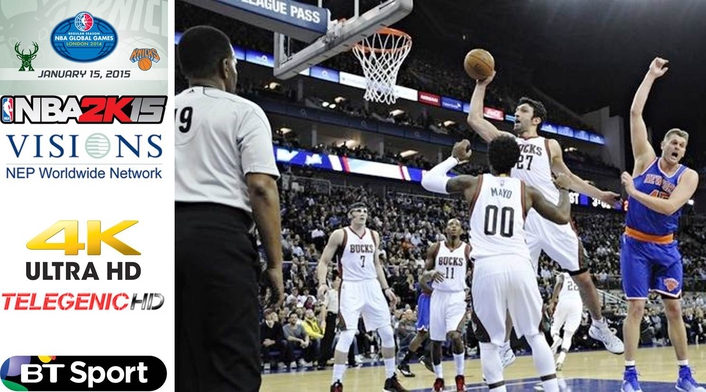 Steve Hellmuth and Andy Beale lift the lid on 4K production trial, picture-stitching techniques
The Milwaukee Bucks raced towards an emphatic victory over the New York Knicks at the NBA regular season game held in London on 15 January. But the notable events on the field of play weren’t limited to the basketball itself as BT Sport simultaneously achieved the first full 4K production trial in NBA history

In the same week that the NBA and BT Sport announced a multiyear expansion of their television partnership that will provide fans in the UK and Ireland with an enhanced NBA viewing experience, SVG Europe caught up with NBA Entertainment executive VP operations and technology Steve Hellmuth and BT Sport chief engineer Andy Beale to discuss the impetus for the 4K production and the impressive results achieved by the continued evolution of picture-stitching techniques.

“A key part of the partnership is a focus on new technology,” says Hellmuth. “The BT Sport guys have really been at the cutting edge in the use of 4K, so when they called up and said they would like to shoot this game in 4K, I said I would do everything I could to facilitate it.” 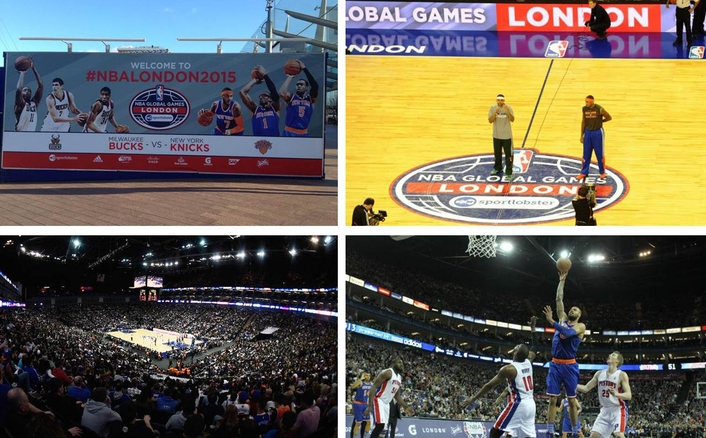 Outlining the 9-camera OB set-up, Beale observes that there were six Sony F55s, one I-MOVIX and two 50p radio cameras upconverted to UHD. “Cameras 1 and 2 were up on the main gantry; 3 and 4 were the two upconverted ones located underneath the net, one at each end; 5 and 6 were the low corner cameras on platforms; 7 was the I-MOVIX super-slow; and 8 and 9 were both situated up in the main high position, with 8 giving reverse angles and 9 wide angle beauty shots.”

This configuration provided the main match coverage, but in addition Beale and his team also deployed the BT Owl stitching product and two additional F55s mounted on the reverse gantry. “The right-hand camera covers the left side of the court, the left-hand camera covers the right side, and these pictures were fed into Sony’s stitching engine to generate a high-resolution 4K panoramic of the whole court, which looks absolutely fantastic. You can take the virtual cameras out of this too,” he says. A second stitch engine and XAVC server allow for 4K replays of the Owl cam view, while an additional four virtual cameras can be made that allow the director to reset the camera to any place in time or space within that field of view.

Replay world
For ingest and replay, the set-up revolved around four EVS XT3 servers for core operations, with an additional unit for super-slo-mos. A Sony XAVC server (with the same installed at BT Sport HQ too) was utilised to record both the master clean and programme feeds. These were streamed to a storage array in an adjacent BT edit truck. This contained an Adobe Premiere Pro system, which was set-up to pick up the clips as they came in and to help edit together a closing package for the show, as well as a highlights programme that BT Sport will finalise in the next few days. Meanwhile, for the first time in BT’s 4K trial history, a ChyronHego solution was used for graphics creation. 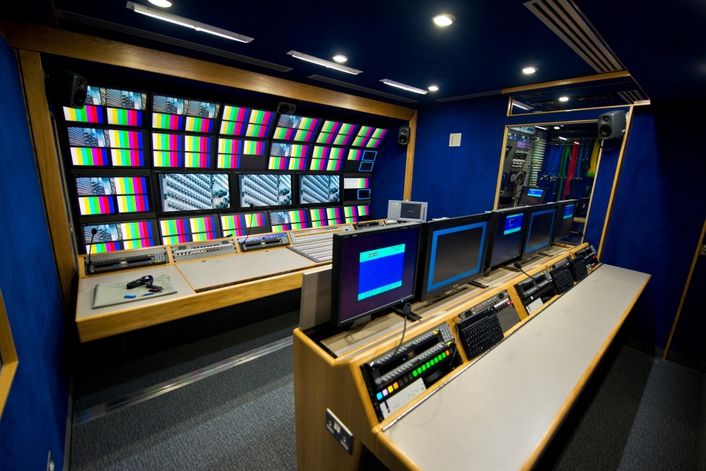 The resulting 4K output was delivered to two corporate boxes and an Amex lounge in the O2, as well as a 65” Panasonic screen in the NBA’s New Jersey, US, office courtesy of HEVC encoding/decoding facilitated by NeuLion and DivX.

All in all, it was an extremely hectic week for BT Sport, with the broadcaster also implementing another trial 4K vision switcher in the compound for the BT Sport 1 coverage to allow a more seamless transition between HD and 4K (“it only does the conversion if it is necessary at the time, so it’s a real-time decision”). But although such ambitious trials could never be described as painless, BT Sport professes itself “delighted with the results and the ongoing collaboration with the NBA; they have been incredibly supportive throughout the process.”

Although Hellmuth has overseen the use of Sony F55s and an Evertz Dreamcatcher system to provide reverse angles for the referees at the NBA finals for the last few years, the London event represented his first encounter with a full 4K production.

“It’s been a very valuable opportunity to learn more about 4K and in particular its possibility as a streaming format that would be an adjunct to the existing HD feed. It’s in streaming that we think 4K will first realise its potential as a format,” he concludes.