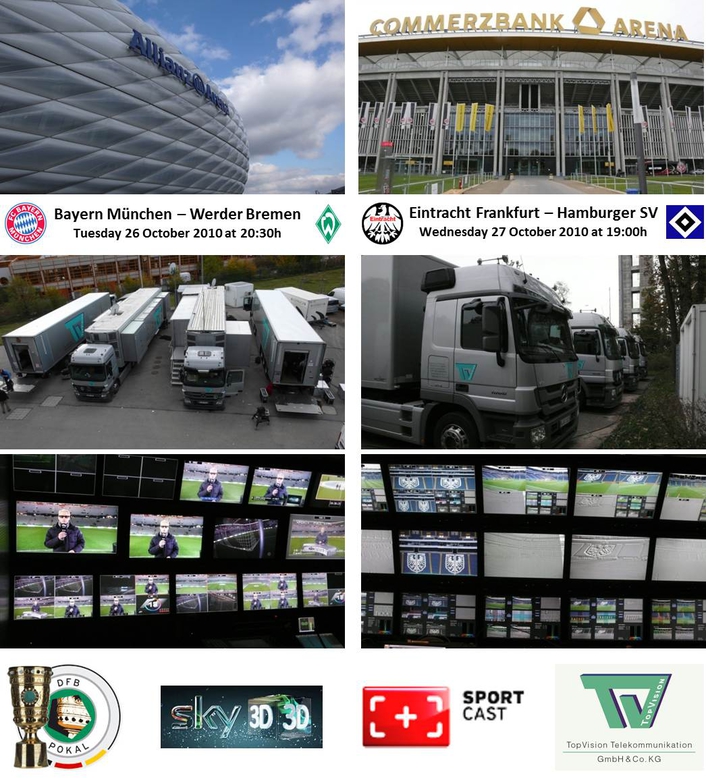 In the second round of the German Cup the defending champion Bayern Munich met SV Werder Bremen on 26. October (2:1) and a day later Eintracht Frankfurt played Hamburger SV (5:2). Both matches were broadcasted live in HD and 3D on Sky. In addition the Bayern Munich game was shown also on “Das Erste” in HD. The live coverage of both matches in 2D and 3D was carried out by TopVision on behalf of Sportcast, a 100% subsidiary of DFL Deutsche Fußball Liga GmbH and responsible for the frames of the German Cup matches. TopVision’s HD Ü4 and HD Ü5 with its associative tender trucks were on location at both stadiums and delivered both signals within 24 hours.

Sky Germany has launched its 3D channel on 13. October at the “Medientage München” with the transmission of the concert of “Die Fantastischen Vier”, which was recorded live on 28. September 2010 in Halle. Another highlight was the coverage of the Ryder Cup in early October, but the touchstone so far was the live transmission of the two German Cup matches from two different locations. And with the start of the second half of the “Bundesliga” season on 15. January 2011 Sky will broadcast every Sunday a match live in 3D. Sky sees 3D as “Event TV” – an opportunity for people to share an incredible visual experience in their home.

When Sky first showed off its 3D efforts back in March this year with the coverage of the Bundesliga match Bayer Leverkusen – Hamburger SV with no firm commitments, it amounted to little more than a publicity stunt. However 3D is the “next big thing”, and although the latest round of polarized stereoscopic 3D is a world away from the anaglyphic colored lens disappointments of the past, nobody would deny that it’s going to take a massive push to convince the public that 3D is more than a gimmick.

Sky’s decision to launch a 3D channel in Germany many would describe as brave, and some as foolhardy, but as we watched the TopVision team filming the two German Cup matches in Munich and Frankfurt with eight 3D rigs and then beam the footage live on the Sky 3D channel, it’s difficult to deny that Sky may just have one point: 3D could well be the next big step for television.

The Setup of the Cameras 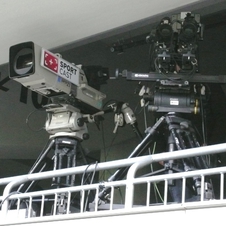 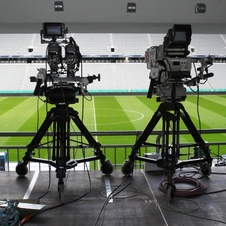 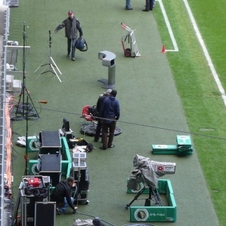 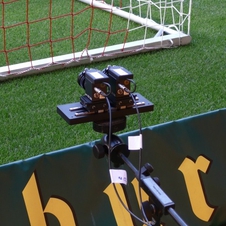 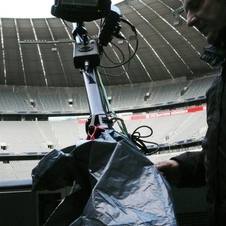 TopVision’s HD Ü5 was dedicated for the production of the 3D signal and a dedicated area for the stereographers was implemented in the associated tender truck. After the eight stereo rigs were mechanically set-up and calibrated at the playground the stereographers aligned the convergence of the two camera signals further and set the depth budget electronically on the Sony MPE-200 3D processors. The MPE-200 is designed to give outside broadcasters the ability to produce quality 3D without necessarily the expense and additional time required for use of fully motorized rigs. The box calibrates the optical centers of the two lenses throughout the entire zoom range. After alignment, a convergence operator can set the required interaxial distance of the rig, and the software will calculate and correct for any misalignment during production. He can also monitor and adjust the signals to ensure they do not go beyond the depth budget boundaries. The processor includes a histogram displaying how much convergence is being pulled and also provides a variety of 3-D monitoring methods, including 50 percent mix, above/below, anaglyph, difference and side by side. During the two German Cup matches four stereographers were assigned to the eight camera pairs, responsible for alignment, set up of cameras and rigs, and pulling convergence live.

The Alignment of the Camera Pairs 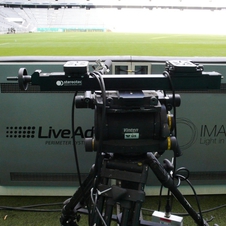 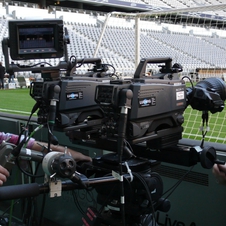 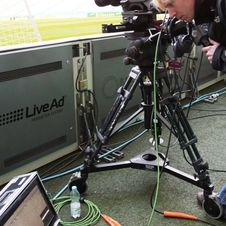 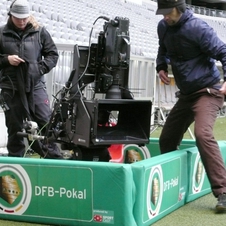 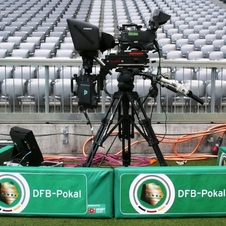 All the work the stereographers are carrying out will change live sports coverage in a way that past improvements never really had. For instance, when HD first arrived on the scene, people suggested that it would fundamentally change the way that sport was covered, but the truth is that – aside from the brilliant resolution – much of the expertise and knowledge that had been honed over years is still entirely relevant. With 3D that is no longer the case: new angles, new techniques and the abandoning of old tried-and-tested practices are necessary. Take something simple as the DOG (digital on-screen graphic) – the graphic displaying the channel name that traditionally sits in the top right corner on all Sky Sports channels. In two dimensions it is largely unobtrusive, but in 3D it looks odd because it sits well forward of everything else on the screen; it literally stands out in a way it shouldn’t. In 3D, graphics can be pushed to the true edge of the picture and the full screen can be utilized for game action. And of course you can direct a 3D game like a 2D game, but it will not be interesting. If you want to hit the target of 3D sports coverage, you need to find the spirit of 3D, because there are things that are possible in 3D that can’t be done in 2D. For example, you can stay with a wide shot in 3D while, in 2D, you would force the cut and force the view. But, in 3D, you allow the viewer to choose what they want to look at. On the creative side, 3D enables camera operators to finally leave the 4:3 “safe area” and use the full 16:9 screen area, as there is no letterboxing in 3D. 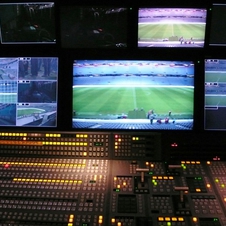 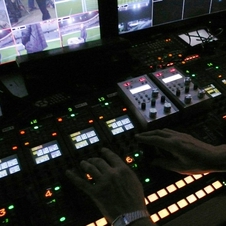 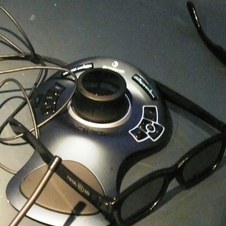 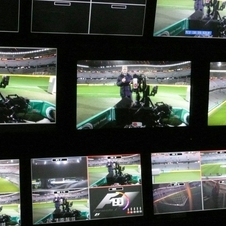 Anticipating the boom in popularity of 3D, Canon has been actively engaged with HD camera manufacturers, 3D rig specialists, and enterprising content creators. Evidently Canon was first choice for TopVision. Canon’s control system for 3D lens-camera-pairs capitalizes on the precision of the new Digital Drive Units, allowing for one zoom controller and one focus controller to simultaneously operate both lenses. In addition the “3D Lens Adjustment Software” made stereoscopic tracking of zoom, focus and iris even more precise. In addition to the five Sony HDC-1500 pairs (all equipped with Canon lenses) on mirror and parallel rigs from Stereotec (and one from SwissRig), we saw LMP HD1200 finger cameras behind the goals and Toshiba cameras on a Polecam. The camera signals were mixed on an MVS-8000 from Sony and recorded on EVS LSMs for SloMo playback. Also some of the cameras used for the 2D coverage were up-converted to 3D and were offered to the convenience of the 3D director. 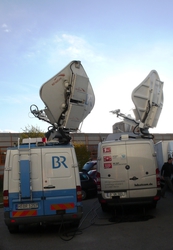 The 3D production of the two German Cup matches was another part of Sky’s way towards 3D – and it is becoming increasingly clear that 3D is not a technology that is going to disappear. The development curve will improve rapidly – however, 3D has to be all about improving the consumer experience at home. And like all things in sports, advancements in technology are welcome only if they look and feel authentic. While there’s a lot of room to grow, there’s no doubt that 3D makes the experience of watching an event much more realistic. It is a pleasure to see that a major broadcaster like Sky is prepared to commit this kind of effort to improve 3D sports coverage to its maximum – because 3D is the peak of top TV production you can offer your audience.