Japanese outside broadcast production company, Kyodo Television, has chosen next-generation server technology from EVS, a leading provider of high-speed broadcast and media production systems for sport, entertainment, news and media, to power a live 4K production of a J League football match for SKY Perfect JSAT Corporation, the Japanese-based broadcasting network and J League rights holder. This unique trial has for the very first time made it possible to provide instant highlights and slow motion replays for a live 4K production. 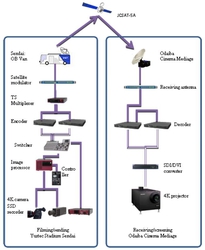 This was made possible thanks to the unique 3G single link in and out configuration of the XT3 servers. The two XT3 servers (in a four in/four out configuration) provided the four 60p synchronized feeds needed for the world’s first 4K slo-mo trial. Kyodo Television controlled the 4K slo-mo operations using the XT3’s unique single link 3G SDI connectivity capabilities for ingest and playout . The two servers were linked through EVS’ live media sharing network and controlled using EVS’ Live Slow Motion (LSM) system.

EVS’ expertise in live sport production technology is the reason we selected their innovative servers for the core of our OB operation,’ said Mr Ishiguro at Kyodo Television. ‘For this high-profile trial we needed to be very confident we could maintain the same speed and reliability despite the huge bandwidth demands of 4K. Having EVS technology at the heart of our end-to-end 4K operation meant we could manage a full live 4K operation and deliver live instant replays, highlight packages and slow-motion functionality. We also have the peace of mind of knowing that the investment is future-proof, a key factor in a rapidly changing technology world.’

Two EVS XT3 servers, configured in 1080p/3G with 4 in/4 out unified channels and controlled with a single Remote Control Unit, were employed in Kyodo Television’s OB vans at the Sendai Stadium. Live feeds of the football match were ingested into the XT3 servers through four 1080p input channels, decoded and made ready for broadcast on 4K projector in Odaiba.

The success of this 4K 60P trial will enable the technology to be deployed for future large-scale productions.