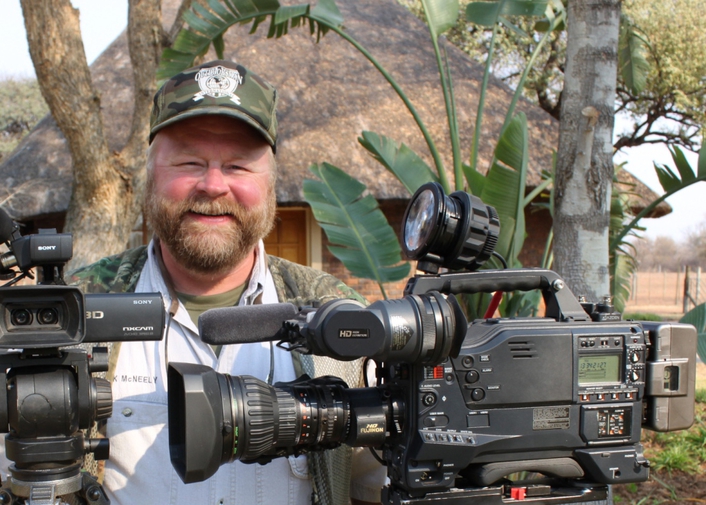 We chose to use the Sola ENG in certain situations where we needed a powerful yet portable light
Renowned wildlife photographer Buck McNeely and his company, Outdoorsman International, made television history by being the first to film an African Safari in 3D. To light the adventure, McNeely chose to use fixtures from Litepanels, part of Vitec Videocom, a Vitec Group company.

“We had a kit of two MicroPro LED lights and brought the new Sola ENG Fresnel on-camera light as well,” McNeely explains. “We mounted the Sola ENG on my camera and ran it off the Anton/Bauer DIONIC HCX batteries. The MicroPro light, which offers self-contained power via six AA batteries, simply mounted on top of our other cameras and we could also hand hold it to fill and illuminate subjects.”

Most of the production occurred during daylight hours but McNeely used the fixtures as fill lights on faces that were in shadows and for the interiors of lodges and sheds. “On several occasions we used them to light the aftermath of a late afternoon hunt to illuminate close ups of an animal’s features,” he adds.

“We chose to use the Sola ENG in certain situations where we needed a powerful yet portable light that puts out a stronger beam,” he says. “Since it also has a dimmer knob, I could fine tune the level of illumination.

“I don’t know what I did before Litepanels lights,” he admits. “They are versatile and can go anywhere due to their low power consumption, battery or AC operation, compact form and lightweight. The lights have become an important part of our production team as we travel the planet seeking high adventure and filming events for our television series.”

Buck McNeely is founder of Outdoorsman International and producer/host of the world’s largest syndicated adventure series, “The Outdoorsman with Buck McNeely”. The ground-breaking 3D Safari episode is slated to air early 2012.

Adventure Series The Outdoorsman with Litepanels