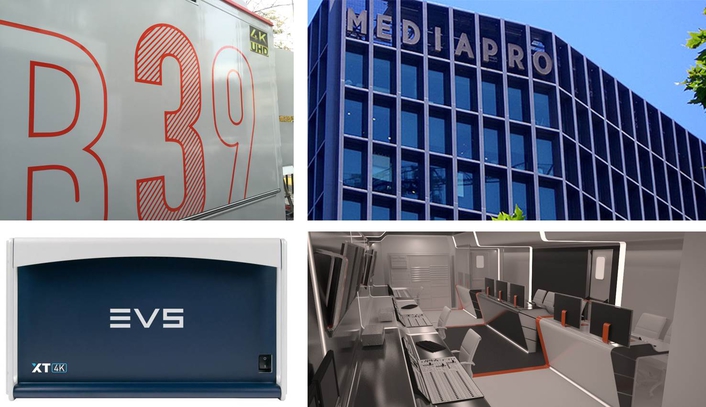 The MEDIAPRO Group, a leading international media company and provider of technical, production and distribution services for the broadcast industry, has purchased ten XT4K live production servers from EVS, the leader in live video technology for broadcast and new media productions.

Two of the newly-announced live production servers have already been installed in MEDIAPRO’s OB39 outside broadcast facility – the truck which produced MEDIAPRO’s first UHD output of an El Clasico game in the 2015 season. With these servers installed OB39 will be utilised for the weekly production and transmission of La Liga football matches in 4K.

Another five XT4K servers will be integrated into OB33, a new truck that’s currently being built by MEDIAPRO that will debut in November and be able to produce in multicast UHD using up to 16 cameras.  The three remaining live production servers will be installed into OB40, a HD production facility that’s currently being upgraded to create UHD content.

“Following a series of successful UHD tests - including two El Clasicos - La Liga knew it wanted to deliver higher-resolution content to its sports fans,” said Francisco José de la Fuente, OB operations manager at MEDIAPRO. “When producing 4K content on a weekly basis it’s important to have the right tools in the hands of our creative personnel. With EVS technology on board OB39, we’re convinced that we’ll will be able to seamlessly deliver UHD content.”

De la Fuente added “over the 20 years we’ve worked with EVS, they’ve developed an understanding of our expectations and our desire to continually build more innovative facilities. Implementing these new servers will deliver the reliability and functionality in live production we know we’ll get from EVS. Using the XT4K means La Liga fans will experience the highest level of 4K storytelling possible.”