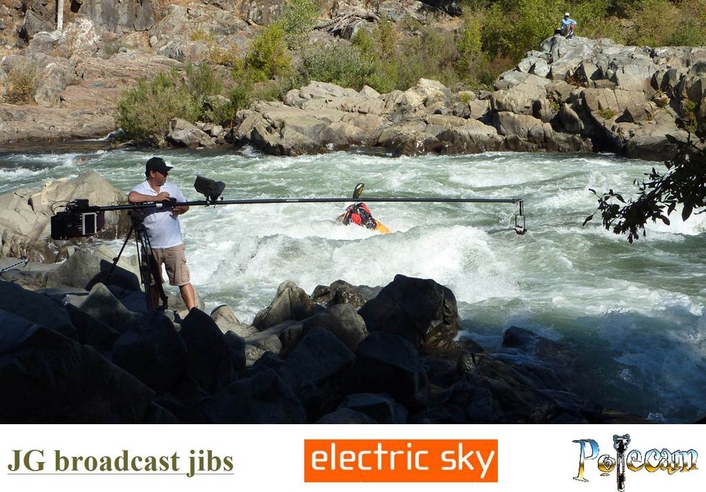 Broadcast television cameraman John Gillan of JG Broadcast has completed a month of 3D shooting in California for UK-based production company Electric Sky. The project involved capturing motocross, jet skiing, BMX biking, rock-climbing, skate-boarding and other extreme action sports for 10 one-hour programmes. These will be transmitted on the US Discovery 3D channel, a partnership venture between Discovery Communications, IMAX and Sony which will be the first US channel to broadcast 24/7 3D television content.

"I used the new Polecam 3D head with two Toshiba IK-HD1 cameras feeding a synchronised pair of Convergent Design NanoFlash recorders," John Gillan explains. "I was my own stereographer so aligned the cameras myself for convergence and interocular spacing. The portability of the Polecam made it perfect for the multi-location and sometimes remote shooting required. Second camera was the recently introduced Panasonic AG-3DA1, also feeding a NanoFlash 3D. An additional capture source operated was a BTF SkyBot stabilised radio-controlled helicopter with miniature 3D-pair cameras on board. Video from the three sources intermixed seamlessly."

Electric Sky was thrilled with the Polecam 3D footage and John has already been booked for the next series.

"The stereo Polecam rig offered a portable no-fuss 3D solution that enabled us to gather many great shots at each location, much more than one might think in a 3D production," adds Electric Sky producer Bosie Vincent. "John Gillan has a knack for finding great angles and developing fluid moves that follow the action. The number of these shots that made the final cut is a real testament to John fs skill and to the effectiveness of the Polecam. The wide lenses on the Toshiba cameras, coupled with the ability to have a relatively small interaxial, meant that John could get close to the action while still maintaining a clean 3D image. Rather than being tied down by a large and cumbersome 3D rig, John fs Polecam set-up allowed the camera to be constantly on the move, keeping the shots dynamic and really boosting the overall production values of the series."

"Discovery 3D Channel is a great concept as it will give other networks confidence to join with the display manufacturers in promoting the depth dimension," comments Polecam founder and Managing Director Steffan Hewitt. "John Gillan has clocked many hours of 3D filming and much of his material is nothing short of jaw-dropping. His combination of dramatic content and unusual capture angles deliver 3D at its best."

The standard pan-and-tilt head sold with Polecam systems is capable of mounting a 3D camera pair. Optimised for normal studio shooting or location work, it incorporates a levelling plate with three fine-adjustment verniers allowing each camera to be exactly matched in height and forward angle. Setup is quick and easy, conforming with Polecam's strategy of ensuring high mobility and operational efficiency.

Based in Brighton, Electric Sky is a cutting-edge, forward-thinking and innovative distribution and rights-management company. Specialising in factual programme distribution, it commands a high reputation throughout the industry. Electric Sky has a diverse catalogue featuring over 1,500 hours of inspired documentary programming plus a vast network of contacts in the international marketplace. The company has continued to enjoy successful business growth since it was established in 1998.

One of the world's best known and most successful Polecam operators, John Gillan has over 20 years of broadcast experience as a jib operator and cameraman. He has been credited with a Technical Emmy for his Polecam work. Commuting between bases in Los Angeles and London, he works for regular clients such as the BBC, ITV, NFL and ESPN.

Polecam provides complete HD/SD broadcast production solutions for a wide range of applications, based on the company's world-leading truly-portable single-operator jib arm and miniature HD and SD camera systems. Polecam delivers the freedom to place a long-reach jib anywhere a cameraman can go, eliminating the restrictions associated with heavy multi-operator cranes. Combined with an ultra-compact camera head and choice of recorders, Polecam jibs permit new and unique angles that would be difficult any other way. Polecam rigs operate from a standard tripod and dolly or from the Polecam body harness, enabling smooth shots in the studio or on location. Rig and de-rig are fast and easy, requiring no tools. Polecam systems can operate underwater with a fully submersible pan-and-tilt head. Polecam stocks a wide range of lenses, recorders, power options, remote control and multiplex equipment. Polecam also offers the simplest 3D system in the market.