It’s 4K All The Way, Drawing Line in The Sand, Storing Stuff 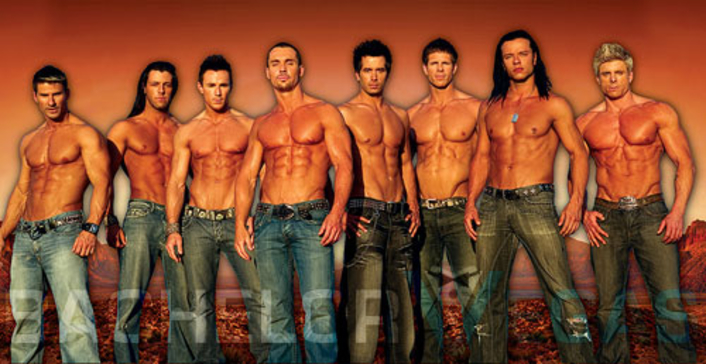 .
Thunder – Like a bunch of buff guys, Blackmagic Design hit NAB this year and had people talkin’ and gawkin’.  The Aussie Thunder Down Under crew showed they were seriously into the mainstream of content shooting/production.

Television and movies always seem to be about surprise, drama and that just about summed up this year’s NAB.
Everyone is talking up 4K (4X is better than your TV stuff today), Ultra HD, cloud production/storage and closer connections with the customer and consumer.
Walking to the waiting plane, we passed the usual signage and the one for Thunder Down Under just seemed to fit for the “big news” this year.

Big Little Sensation
We’ve known Blackmagic Design for years. They have a great group of Melbourne-based Aussies who made terrific production/post production boards and they’ve slowly expanded their footprint in the market; but boy, this year they came with a whole lot of thunder!
Last year, it was their Cinema Camera which the industry liked but Red always seemed to have the wow factor.
This year, they made us take notice with two new cameras: the Blackmagic Cinema Camera 4K and the Blackmagic Pocket Cinema Camera.
The Blackmagic Production Camera 4K, is a high-resolution 4K digital film camera with a large Super 35-size sensor with a professional global shutter and all kinds of neat stuff that videographers really love.  And with cameras normally in the $25K range, it caught a lot of attention with its $4K price. 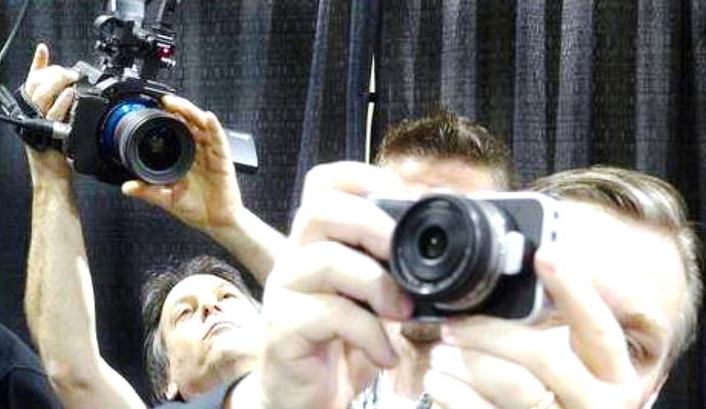 Little Big Jewel – Blackmagic’s new compact digital cinema camera had all of the shooting features and capabilities professional videographers would want in a shoot-anywhere camera.  And the fact that you could pop the little beauty in your pocket for about one grand is going to appeal to a lot of the indies and YouTube folks.

But Blackmagic’s real surprise was the Pocket Cinema Camera that fits in your pocket, offers full-sized cinema quality and has a ridiculous sub-$1K price that is cheaper than a really good DSLR (digital single lens reflex) camera.
Blackmagic’s CEO, Grant Petty, positioned the new little gem that will allow pros to shoot in places where they’ve never been able to use a quality camera before. At that price, it’s almost a disposable camera, but we think it’s gonna’ be the camera that indies will go with and who knows how many YouTube videographers! 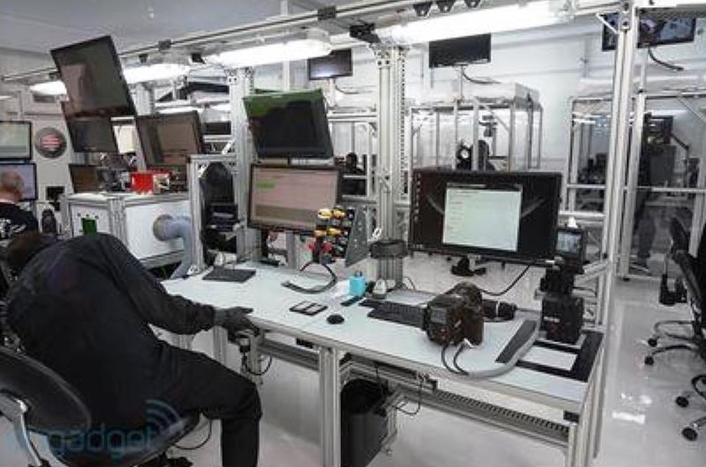 Red Eyecatcher – Red always seems to have a way to drag you into their NAB booth and a cleanroom set-up. This year, showing you how they upgrade their 4K sensors to 6K right before your eyes certainly did the trick.  It’s nice to see they’re thinking about how the pros can extend the life of their shooting investment since most of the cameras at NAB aren’t cheap.

We’ve always been in awe of Red because they just looked like awesome cameras and people.
This year, they drew even more attention to their booth with a cleanroom set-up in their booth to show how they upgraded their Dragon boosting 4K to 6K. 6x is your regular HD viewing, which means you can shoot at 6144 x 3160 pixels and up to 100 frames-per-second.
They had people pressing their noses to the windows (including the competition) to watch the work-in-progress … cool, interesting.
Sure, there were other cameras shown from all the usual suspects – Sony, Panasonic, etc. – but if you really wanted to be at the bleeding edge, Japan’s NHK (always on the bleeding edge) showed off 8K (yeah, 8X is better than your HD stuff)  video with 22.2 channel audio.
Their new super-high video single-chip camera has a 120Hz image sensor which lets them do really high-def filming of fast-moving objects.
Oh yeah, they demonstrated the mind-boggling video on a 300-in screen.
To show Hollywood a little love, Intel announced the next-generation of their Thunderbolt interface that will double the throughput and expand their 4K support.  Of course, I’d like to see just one flavor of Thunderbolt so more storage folks would commit to it.

Tighter Budgets
It was easy to see that “the good ol days” of broadcast ain’t anymore.
Only an idiot thinks it will return!
Production people like Avid, Grass Valley, Harmonic, Quantel, Sony and all of the other big booths are a lot more humble today.
Some have cut back so much their press galas disappeared.
Proverbial arm-and-a-leg production equipment has become a whole lot cheaper and many of them are now taking up the world’s mantra of The Cloud.
A number of folks touted their MAM (media asset management) in the cloud but that’s the broadcasters/content creator’s assets floating around up there … somewhere.
It’s a whole new game and these guys/gals have to go on a diet and start exercising fast … or else!
A good example was Wohler, known for its audio monitoring software. They bought Radiant Grid – file-based signal processing solutions – and have been getting into a lot of new business.

Production Meters – Audio HW producer Wohler showed off its file-based signal processing solution at NAB.  They recently acquired Radiant Grid to get the technology.  With the shift in technology, there’s a whole lot of downsizing and acquisition going on in the industry as folks struggle to survive.

They’ve moved into new areas, like a lot of the standards of the industry; but at the same time, they’re shrinking.

If they and the others don’t, they’ll be one of those neat little footnotes of the industry.
Speaking of footnotes, Fox/News Corp’s Chase Carey got the short straw and said if things like Aereo and Hopper were deemed legal, networks would have to move to the pay-for-view model. 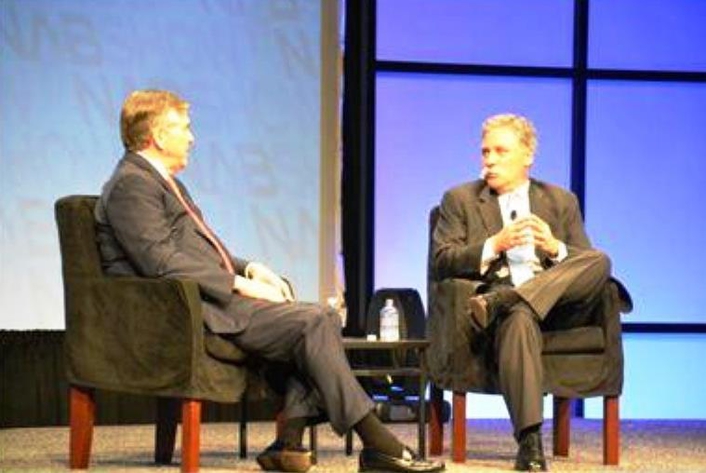 Drawing the Line - News Corp’s Chase Carey (r), makes no bones about the fact that the industry doesn’t like the way the courts are treating the industry’s property.  NAB president  Gordon Smith was “a little” more diplomatic in talking about folks having to give up parts of their spectrum to the wireless people so we can watch more of their content on our mobile devices.

We’re not talking chump change here because stations pay about $2.6B in retransmission fees, according to SNL Kagen; and that is projected to rise to hit $6B in 2018.
Both Aereo and Hopper got more publicity than they probably deserve because their customer bases aren’t much better than TiVo … on a good day!
But that was then, this is now and cord-cutting is in vogue.
The problem is broadcasters are getting hit (hard) from all sides.

Play Nice
The FCC is already working to take away part of “their” broadcast spectrum and give it (O.K., sell it) to wireless companies like AT&T and Verizon who then make it possible for Internet services like Aereo to send you “their” signals for zip, zero, nada.
Carey and the network folks said if Congress doesn’t act (done a great job on the budget) they’d have to go paid.
Even though they don’t like each other very much, NAB president, Gordon Smith and Verizon’s Lowell McAdam said they’d work more closely together to deliver content to your mobile device and expand sending video over networks.
It sucks to be stuck between a rock and a hard place.
But content – RAW, post, distribution, archiving - still comes back to storage and for the dailies and post work.

Remember, we’re talking Ultra-HD stuff; so let’s say you have 16,000 x 8,000 pixel resolution, 24 bits/pixel, 300 fps RAW video.
That requires 115GB/s data rates (414TB/h) and that could easily double.
With 4K cameras (and above) you’re talkin 1.66TB/h of content.  That’s a lot to store and a whole lot to push through the Internet and airwaves!
LaCie took advantage of Intel’s Thunderbird announcement to show off its newest family of personal and workgroup storage units designed for media and heavy workload applications. 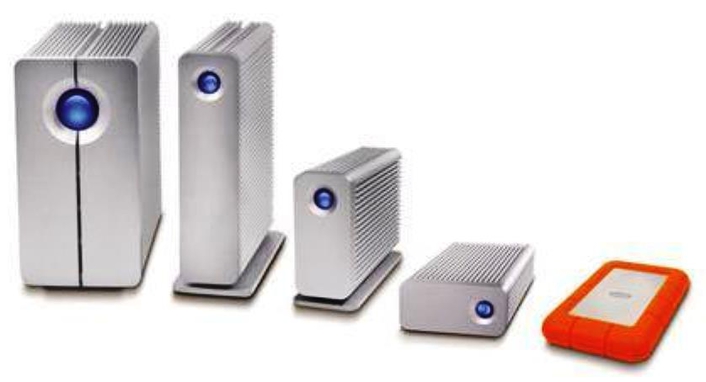 Personal, Team Storage – With Intel taking the covers off yet another version of their higher- speed Thunderbolt interface, there was a lot more interest in personal and workteam storage solutions at NAB.

Long a favorite of creative folks, they showed off a sleek family of hubs, really big and rugged drives that can deliver performance up to 800MB/s which should be pretty good for even the most picky producer.

Cloudy Clouds
Most of the cloud storage people on the regular NAB floor waved their hands in the air and told anyone who would listen how they could store all of their stuff in their clouds and save a ton of money and headaches.

Cloudy Solution – Everyone seems to be offering a cloud work-in-progress and storage solution this year that will make it faster, easier for the pros (and consumers) to produce and distribute their content.  They talk about archiving the stuff in real cloudy terms when it comes to long- term reliability.

That’s about all the booth people really know.

They don’t have a good grasp on all of the HW/SW pieces that are supposed to save, protect, and preserve all the really expensive creative work the NAB attendees make.

Fortunately, there’s a 2-day event called the Cloud Computing Conference (CCC) put on by DCIA (Distributed Computing Industry Association) that actually does a pretty good job of giving you a clue about cloud storage - private, public or hybrid cloud storage.

For the best explanation, I’m circling June 25 for the Creative Storage Conference in SoCal.

I just want to know where my stuff is – exactly where it is – and most of the NAB attending pros we talked to from Fox, Warner, Turner, Disney are looking for the same thing … safe, secure, reliable archiving.

Will need it for all the great stuff I produce with the Thunder Down Under pocket camera I have to convince my wife I really need!