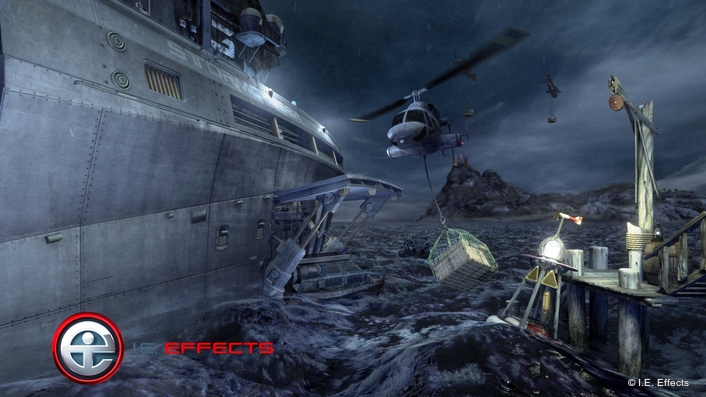 Traveling in the Storm
I.E. Effects delivered 3D reality for “Traveling in the Storm,” an immersive entertainment experience developed by Falcon’s Treehouse for OCT Shanghai’s Happy Valley. In this innovative ride participants assume the role of storm chasers. Traveling in an Amphibious Exploration Vehicle, they embark on a series of extreme weather adventures, including stereoscopic visuals combined with physical effects, such as splashing water, wind, changing temperatures and more. I.E. Effects designed and executed all of the stereo content, including visual concepts, modeling, texturing, lighting, and compositing for each shot.

“We were really impressed with the knowledge and creativity of David’s team at I.E. Effects,” said Cecil Magpuri, President of Falcon's Treehouse. “Their experience with previous stereo 3D and venue projects was a great asset, and their understanding of the overall process is invaluable. They are a great team to work with!”

“Traveling in the Storm” begins with a dramatic beach landing while helicopters roar overhead unloading equipment. After surviving a near miss with one of the helicopters, and the falling mast of a wrecked ship, participants seek shelter in a seaside cave. The tide rises, forcing the adventurers through a vent in the roof. There they are pounded by hail and, just as they seem to have found shelter in an old fort, the team is caught in a tornado and carried into the air. For a moment time stands still as they levitate in the eye of the storm before a terrifying descent back to the surf where the journey began. 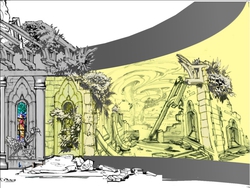 “For an experience like this, stereoscopy allows us to seamlessly extend the physical scenery into a CG world with proper depth cues and action within an environment that stretches as far as the eye can see,” said Dennis Michel, VFX supervisor at I.E. Effects who oversaw the pipeline for this project. “This extension of a relatively small area opens the creative content up to almost infinite possibilities. The visuals can reach out past the screen, almost touching the audience, or be pushed far back towards the horizon, presenting a vast landscape or vista. We used both techniques extensively, assuring a truly immersive experience for the riders.” 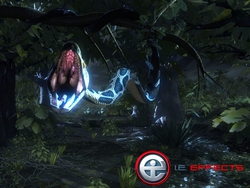 Corner-pinning the content was one of the technical achievements on this project for the team at I.E. Effects. Traditionally, corner-pinning involves skewing the image, for example to enhance perspective or to correct lens distortion. In this instance the corner-pinning had to incorporate two stereo channels and move them fluidly in relation to the movements of the physical ride vehicle to ensure that the stereoscopic imagery displays correctly from every position. The digital content needed to mesh with physical scene elements, and, adding to the complexity of the task, some of the footage is displayed on curved surfaces. “Corner-pinning gives us a great deal of control and allows us to provide a seamless viewing environment for the ride, but it certainly presented challenges on this project,” explained Michel. “We used Maya and Lightwave. It took some hard work, but we solved it and we’re all delighted with the results.”

You need to think far ahead

“Falcon’s Treehouse has a well-deserved reputation for developing breakthrough attractions,” said David Kenneth, executive producer and founder of I.E. Effects. “When you create an attraction like this, it has to last for years to come, so you need to think that far ahead. It’s not just about what looks good today. It’s about building things for tomorrow.”

“I.E. Effects shares an understanding of not only our process, but our culture,” said Cecil Magpuri, “This is incredibly important for us. Our creative vision and our storytelling are what set our attractions apart from the competition, and to work with a group that shares this passion is tremendous!”

“The thing we found most exciting about this project was being given the freedom to develop and create concepts ourselves,” added Kenneth. “Our ideas were well received which made the creative process very enjoyable. I feel the creative respect between our two teams is what enabled us to take this project from an idea to a fully realized stereoscopic reality in under four months.”

Falcon’s Treehouse, LLC is a creative services firm specializing in creating immersive technology driven experiences designed to thrill and amaze today’s sophisticated audiences. Utilizing the most advanced technologies in design, turnkey management and production services, Falcon’s Treehouse is a leader in the entertainment and destination industries. Since its inception, Falcon’s Treehouse has generated a wide spectrum of work for high-profile clients like Disney, Universal Studios, SeaWorld, Busch Gardens, OCT, Ramoji Film City, Zoological Society of San Diego, Space Center Houston, and Hard Rock. Cecil Magpuri, President of Falcon’s Treehouse, is perhaps best known for his innovative use of technology in such attractions as the award-winning Curse of DarKastle at Busch Gardens Williamsburg and as the creator of Dragon’s Treasure in City of Dreams in Macau. Falcon's Treehouse, LLC, is headquartered in Orlando, Florida 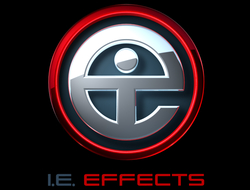 Based in Culver City, California, I.E. Effects offers filmmakers the resources of a large postproduction facility in a boutique studio environment. I.E. Effects provides comprehensive post and finishing services for commercial, television, feature film, theme park and new media clients, as well as a full stereo 3D pipeline from on-set supervision through distribution. Services include editorial, visual effects, graphics design, digital intermediate, as well as web and mobile development. The company’s team has contributed to the success of projects such as Spiderman II, which won an Oscar for best visual effects, Triangle, an Emmy award-winner for best visual effects, Drag Me To Hell, and most recently delivered visual effects for Michael Jackson’s This is It.