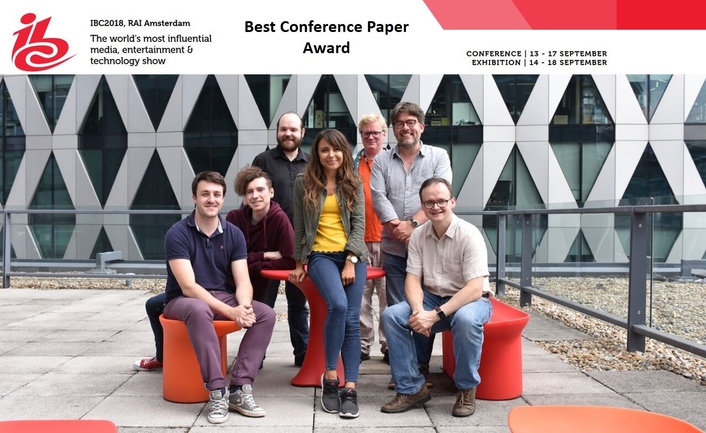 In a year when artificial intelligence and machine learning became a very hot topic in the media industry, the IBC Best Conference Paper Award goes to a team from BBC R&D which has investigated practical applications. The award is made to the technical paper which, according to the team of peer reviewers, delivers not just the most significant new research, but does so in an accessible way.

The paper, ‘AI in production: video analysis and machine learning for expanded live events coverage’, will be presented at midday on Sunday 16 September as part of a new initiative at IBC2018 – ‘Tech Talks’. ‘Tech Talks’ ensures that the highly respected technical papers remain an integral part of IBC and its conference, bringing the latest ideas to all delegates in a fresh and accessible form.

Talking of the new innovation, Dr Nick Lodge, executive producer of technical sessions in the conference, said “Senior technologists and researchers who have been responsible for original and thought-provoking advances in media technology will talk about their own work, and audiences will have the rare opportunity to question these world experts.

“The technologies that impact the media industry are broad,” he added. “This year’s ‘Tech Talks’ will cover emerging areas like artificial intelligence, virtual and augmented reality, 5G and blockchain.”

In the award-winning paper a team of BBC researchers covering a wide range of skills, under project lead Mike Evans, discuss a project known as ‘Ed’. This prototype system is used to create near-live content with minimal crew. An example might be a set of three unmanned 4K cameras, from which ‘Ed’ would produce a number of properly framed HD pictures, cutting between them as appropriate.

“The point of the work is to allow coverage of more events, to reach places we otherwise could not reach,” Mike Evans said. “With conventional production we cover only about six of the nearly 100 places music is performed at the Glastonbury Festival, for example, or just a tiny fraction of the 50,000 performances in 300 venues at the Edinburgh Fringe.”

“But with ‘Ed’ we can reach many more of these and do so with production techniques which are much less intrusive for the event itself,” he explained. “This technology will be suitable not just for major production companies like the BBC, but for a whole range of use cases, like minor sports which need to increase visibility, and even vloggers who want to improve their online presence.”

Dr Paul Entwistle, Chair of the IBC Technical Papers Committee which provides careful peer review of the many papers proposed for IBC, said “The detail in this paper is absolutely fascinating. The team has developed an artificial intelligence system that understands the rhythms and cadences that make for professional video production. This was validated by research to see how well ‘Ed’ performs compared with a real director, and how the audience perceived the viewing experience.”

The authors winning this year’s IBC Best Conference Paper are Craig Wright (who will be presenting it at IBC), Jack Allnut, Rosie Campbell, Michael Evans, Ronan Forman, James Gibson, Stephen Jolly, Lianne Kerlin, Zuzanna Lechelt, Graeme Phillipson and Matthew Shotton, all from BBC R&D. They will be presented with the award as part of the IBC Awards Ceremony, on Sunday evening 16 September at 18:30 in the Auditorium.
The ceremony will see the presentation of all of IBC’s awards, including the International Honour for Excellence. Attendance is free for all IBC visitors.

IBC announces shortlist for the IBC2018 Innovation Awards
IBC2018 with Keynote Sessions from Amazon, Viacom and Wonderhood Studios
See where the future unfolds at the IBC2018 Leaders’ Forum