According to forecasts from the International Data Corporation (IDC), worldwide revenues for the augmented reality and virtual reality (AR/VR) market will grow from $5.2 billion in 2016 to more than $162 billion (€143.7bn) in 2020. This represents a compound annual growth rate (CAGR) of 181.3 per cent over the 2015-2020 forecast period. IDC’s new spending guide expands on previous AR/VR forecasts by offering greater detail on revenues by technology, industry, and geography.

“For many years augmented and virtual reality were the stuff of science fiction. Now with powerful smartphones powering inexpensive VR headsets, the consumer market is primed for new paid and user generated content-driven experiences. Recent developments in healthcare demonstrated the powerful impact augmented reality headsets can have at the industry level, and over the next five years we expect to see that promise become realized in other fields like education, logistics, and manufacturing,” Chris Chute, vice president, Customer Insights and Analysis.

“The rise of new, less expensive hardware will put virtual and augmented reality technology within the grasp of a growing numbers of companies and individuals,” said Tom Mainelli, vice president, Devices & AR/VR. “But, as always, what people can do with that hardware will depend upon the applications and services that power it. In the coming years, we expect developers to create a wide range of new experiences for these devices that will fundamentally change the way many of us do work.”

Sales of AR/VR hardware will generate more than 50 per cent of worldwide revenues throughout the forecast period. AR/VR software revenues will also get off to a quick start, growing more than 200 per cent year over year in 2016, but will quickly be overtaken by services revenues in the middle years of the forecast, as logistics and manufacturing demand enterprise-class support. 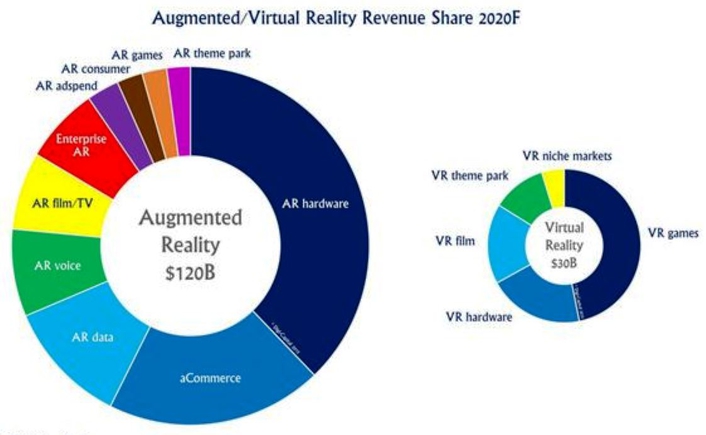 Revenues for VR systems, including viewers, software, consulting services and systems integration services, are forecast to be greater than AR-related revenues in 2016 and 2017, largely due to consumer uptake of games and paid content. After 2017, AR revenues will surge ahead, hitting critical mass in healthcare delivery and product design and management-related use cases.

From a regional perspective, Asia/Pacific (excluding Japan)(APeJ), the US, and Western Europe will account for three quarters of worldwide AR/VR revenues. The three regions will generate comparable revenue amounts in 2016, but the United States is forecast to pull well ahead of the other two regions by 2020. Because AR/VR technology is still in the early stages of adoption, every region is expected to see annual growth of more than 100% throughout the forecast period.

Virtual reality will give an up-close 360-degree viewing experience of the Olympic Games
The Olympics Streams Aren’t VR, But They Are Paving The Way
NextVR Unveils World's First Virtual Reality Production Truck at NAB Show