A Global View on 3D Broadcasters 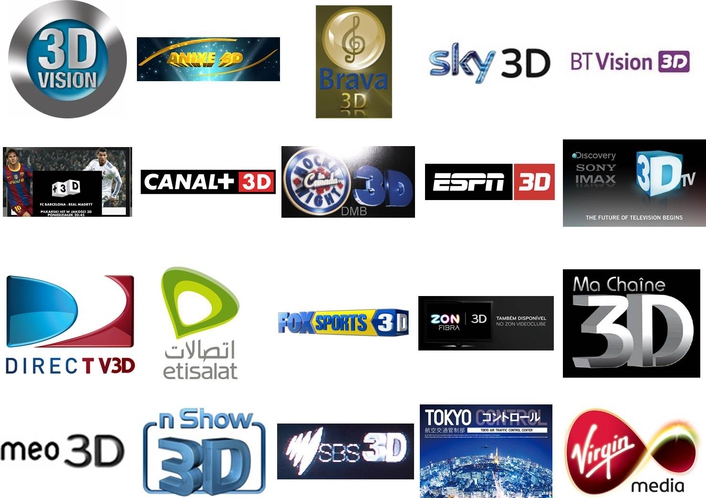 Sky 3D
BSkyB has been testing 3D content since 2008 with a mixture of live sports, music and cultural events, and in April launched a 3D channel in over 1,000 pubs and clubs that featured at least one live sporting events each week. Sky 3D went live to the public in October (with a mixture of sport, films, documentaries, concerts and and on-demand movies) and its Christmas highlights will include the worldwide 3D TV premiere of Avatar, the documentary “Flying Monsters 3D” (written and presented by Sir David Attenborough), the Prince’s Trust Rock Gala and all the major Premier League football matches.

Virgin Media
Virgin Media launched their 3D platform “3D Movies on Demand” last September, with a selection of 3D films and TV programmes. Christmas saw the addition of “Step Up 3D” and “Disney’s A Christmas Carol 3D” to their on-demand selection.

BT Vision
BT Vision also launched an on-demand 3D service and has since signed a deal with NBC Universal allowing it to show all of the studios 3D films for a year (starting with “Step Up 3D” and “Despicable Me”).

BBC
The BBC doesn’t have a formal 3D channel but did create its first 3D content in November for Children in Need using specially filmed footage from “Strictly Come Dancing”. The broadcaster has also revealed that it may screen some of the 2012 Olympics in 3D.

Discovery
Discovery have been given a 3D broadcast licence, though as yet no official announcement has been made about when a possible channel might go live.

Canal+ 3D
The launch of Canal Plus’s 3D channel has been put back from December 2010 to February 2011. Canal+ themselves broadcast a number of World Cup matches during the tournament last year. This far the station has revealed that it intends to broadcast a mixture of films, live events, sports and animation.

Orange 3D
Orange 3D first went live on a trial basis last May and concentrated primarily on sporting events, including the French Open. During Christmas the channel broadcast a wide variety of programming which included classical theatre, ballet, Russian circus, boxing, surfing and fashion. The channel has also launched a video on demand service featuring “A Turtle’s Tale” and “Clash of the Titans”.

Sky 3D
Sky Deutschland trialed 3D last March with the broadcast of a match between Bayer Leverkusen and Hamburger SV. The channel launched fully in October and features a range of sports (including the Ryder Cup, UEFA Champions League, DFB-Cup and the German Ice Hockey League), films, documentaries and entertainment. This channel is also available in Austria.

Anixe HD
Anixe HD broadcast first trialled 3D programming in April 2010. Since May 2010 the channel has been broadcasting 3d programs in regular 3D slots, including sport, documentaries and concerts.

Deutsche Telecom
Since September 2010 Deutsche Telecom’s IPTV service T-Entertain has begun offering on-demand 3D movies, sports and documentaries. Since 16 January 2011 T-Entertain is broadcasting live one match on every match day of the German Bundesliga in 3D.

Mediaset
In September Mediaset began to offer a selection of on-demand 3D films, including “The Legend of Beowulf” and “Journey to the Centre of the Earth”. The broadcaster intends to add one new 3D film to the selection each month.

Canal+ en 3D
Canal+ Spain became the first TV channel to broadcast 3D content in Spain in April 2010, when it featured a concert from the Spanish recording artist Enrique Bunbury. The network also broadcast some World Cup matches in 3D in June.

Ziggo
Dutch cable operator Ziggo produced the country’s first live 3D broadcast in June 2010 with a political debate during the Dutch general election. In October 2010 Ziggo added its first 3D titles to its video on demand service: “Fly Me To The Moon”, “Spy Kids 3″ and “My Bloody Valentine”.Ziggo also carried Net 5 3D – a 3D TV channel operated by SBS which broadcast Net 5′s regular programming in 3D with extra 3D content in the evening. Net 5 3D was launched in September 2010, but SBS closed it down early this year citing “content rights issues”.

UPC
UPC Nederland began its 3D broadcasts in April 2010 with the Augusta Masters golf tournament. The cable company has subsequently broadcast a number of 3D films and in November 2010 also began to include 3D films its UPC On Demand service.

Brava3D
Brava3D launched in November 2010 and is the first channel in mainland Europe to broadcast 3D content 24 hours a day. The channel is a sister channel to BravaHDTV and specialises in cultural programming including opera, ballet and concerts.

At present Switzerland does not have a channel broadcasting 3D content, though UPC CableCom did broadcast 3D footage from the US Masters in April 2010. tpc are also actively investigating Stereo 3D.

Meo
Meo has also broadcast football in 3D to Portuguese fans during 2010 (offering coverage of some World Cup matches) in addition to a selection of tennis matches from the Estoril Open and the world’s first live broadcast of a 3D surf event and a live concert by Pedro Abrunhosa.

Zon
Zon announced that it would be providing 3D content in March 2010, and broadcast two footbal matches in May prior to the World Cup. The operator has also been offering 3D content via its on demand service Videoclube.

SAT Plus
SAT Plus and UPC began regular 3D broadcasts in June 2010 on the HD+ channel.

Canal+ 3D
Canal+ carried out the first 3D transmission in Poland in May 2010, with a football match from the Ekstraklasa league. Canal+ also co-produced a 3D movie named Projekt Chopin.

Telenet 3D
Telenet has delivered the first live 3D broadcast in Flanders and will broadcast even more important TV programmes in the future. This initiative is the living proof that Telenet is perpetuating its innovative spirit where TV is concerned.

NTV Plus (НТВ Плюс)
NTV Plus launched Russia’s first 3D service in October 2010 in conjunction with Panasonic. The launch followed earlier 3D broadcasts of a selection of World Cup matches and the Champions League final.

ESPN 3D
ESPN 3D began broadcasting in June 2010, with a sports line up including 25 World Cup matches, the 2011 BCS National Championship Game, college basketball and football and the Summer X Games. The channel is scheduled to begin 24/7 3D broadcasting on 14 February 2011.

xfinity 3D
Looking to keep pace with DirecTV in the still-nascent 3DTV arena, Comcast on Feb. 20 will launch Xfinity 3D, a 24-hour channel that will feature concerts, sporting events, more than a dozen movies and original programming. Comcast also announced that it has served more than 1 million views of 3D video-on-demand content since providing the Masters Golf Tournament in the format in April 2010.

Etisalat
Etisalat launched a 3D service for the UAE in June 2010, featuring content from other broadcasters including the World Cup from Al Jazeera Sport.

SkyPerfecTV
SkyPerfecTV are launching the world’s first 3D television series in conjunction with Fuji TV (who will also broadcast the 2D version). The series “Tokyo Control” is set in the Tokyo Air Traffic Control Center and will go live at the end of January 2011. Last year SkyPerfecTV launched the dedicated 3D channel SUKACHAN 3D169 in order to broadcast 25 matches from the World Cup in 3D.

SBS
SBS provided a dedicated 3D channel in conjunction with Sony and Harvey Norman during the World Cup in order to broadcast 3D matches from the competition.