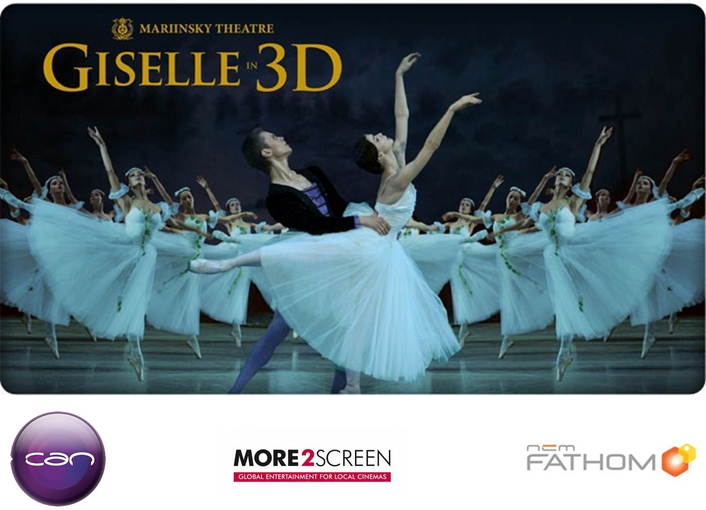 After attracting large audiences in Europe, Brazil and Russia, NCM Fathom brings Giselle in 3-D to173 cinemas accross the US
This week, audiences in the US will have the opportunity to watch a 3D ballet production in cinemas for the first time.

Buoyed by the success of Black Swan and numerous television shows, dance is experiencing a popularity not seen since the 70’s.  However, will this more mainstream audience be as compelled by a form of dance that has traditionally been seen as elitist and exclusive by its nature.

In the opera world, audiences have gradually been attracted to the cinema to see the Met’s live 2D broadcasts. After losing money over the first few years, the screenings have gone on to be come very profitable, last season sold 2.4 million tickets, grossed $ 48 million, and put a net profit of $ 8 million into the opera company’s coffers. However ballet and opera audiences are often mutually exclusive and the theatrical distributors for Giselle in 3D have a tricky project in promoting a totally new proposition. 3D has typically attracted younger audiences, so it will be interesting to see if more mature audiences find the medium as compelling.

Cinemas are in the midst of an evolution and in the process, are becoming places where audiences can savour culture, music and sports events in a new way. Producers, distributors and exhibitors face a new challenge to change the traditional perception of the cinema as purely a place to devour feature films. Box office figures are continuing to grow, and 3D will only help box office revenues. For the right projects there will be some big opportunities in the sector and for CAN, it’s exciting to be at the forefront of this theatrical evolution.

After attracting large audiences in Europe, Brazil and Russia, theatrical distributors More 2 Screen have been working with NCM Fathom to bring Giselle in 3-D to173 cinemas in more than 30 states across the US. Giselle hits cinemas on Tuesday, July 12 at Noon followed by a second performance at 7:30 p.m. (both times local). The US release of Giselle in 3D coincides with the Mariinsky Ballet's residency at the Metropolitan Opera House during the Lincoln Center Festival. The company performs three programs multiple times beginning on July 11.