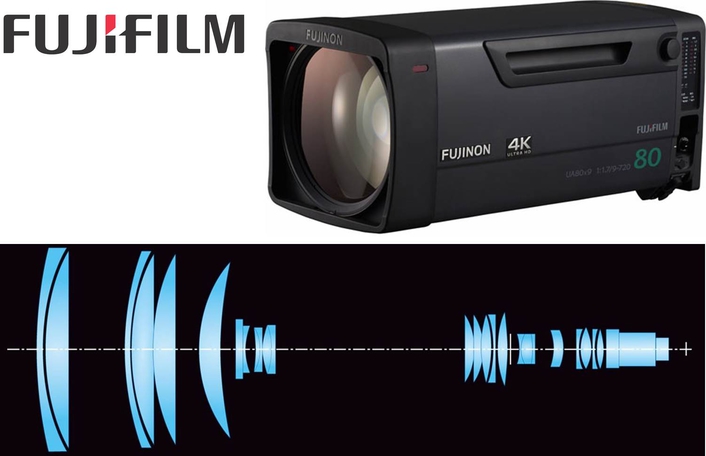 FUJIFILM Corporation introduced the world’s first 2/3” inch Fujinon 4K Ultra High Definition Television Zoom Lenses
As the gateway to light and first element in the production chain, the lens demands the highest optical performance. Ever since the first color television content aired in 1962, FUJIFILM has pursued the development of broadcast-quality lenses for the television industry. Then as now, our mission is to provide production professionals with “high performance, high quality lenses.” This Fujinon lens commitment to quality has won the acclaim and trust of both the broadcasting and cinema industries. With the full-scale shift to 4K broadcasting on the horizon, we are polishing the cutting edge of our high-precision optical technology and paving the way for the future of imaging production.

Back in 2009 the “HK-Series” cine zoom lenses with 8K-class optical performance was introduced. The HK-Series have since become popular visual tools in major movie productions around the globe. In 2012 on the back of the success of the HK-Series Fujinon launched the 4K-class “ZK-Series” cine zoom lenses which are much lighter in weight, they were the world’s first PL-mount cine lenses which incorporated  detachable full servo 16-bit drive units.  Both the HK and ZK lens series played a major role in the 4K test broadcasts of numerous global sporting events including the Confederation Cup and World Cup, further raising both Cinematic and TV Broadcast industry recognition of FUJINON as synonymous with 4K (+) ultimate optical performance. 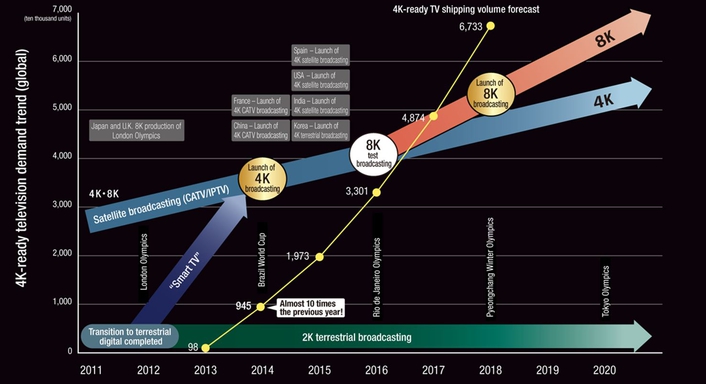 Roadmap for the Advance of Broadcasting Services (4K/8K), Japan Ministry of Internal Affairs and Communications

The demand for 4K video contents are surging amidst a 7-fold year-on-year increase in the shipment of 4K-compatible television sets to approx. 11.6 million units*2 last year and the launch of a dedicated 4K channel (CS satellite broadcasting) in Japan in March this year. Fujifilm’s lineup of cine lenses has included the “HK-Series” which offers optical performance approximating to 8K systems, and “ZK-Series”, which combines 4K optical performance and electric drive units. With a solid reputation not only from the film industry, but also from broadcasters producing 4K content. Fujinon lenses in both “HK” and “ZK” series are frequently used in 4K broadcasts at international sporting events.

Minimal aberrations over the entire zoom range with extreme high contrast, high dynamic range and image purity are achieved by FUJINON’s newly developed zoom group approach and floating focus system (variator/compensator). True 4K imaging expression rich in color reproduction is realized by the increase is realized by the increased red and blue transmittance ratio which is a benefit of the HT-EBC (Electron Beam) coating with the highest transmittance and lowest reflectivity ratios that can be achieved with current production technologies. The below graphic illustrates the optical performance values which can be achieved by the type and degree of coating layers which is applied to the glass (crystal) elements.

Excellent 4K imaging quality of even distant detail is faithfully conveyed to the camera by elevating the optical performance in the frequency bands that carry the vast majority of imaging. High-fidelity transmittance of “blacks” to the camera is essential to imaging expression, and FUJINON achieves this with advanced optical material and the latest in lens coating technology.

Optical loss is reduced to new extremes to achieve 4K-class imaging expression rich in color gamut reproduction.The 4K image quality not only displays suppression of a variety of aberrations, but also remarkable sharpness and clarity. The UA-Series has integrated 16-bit encoders that can provide high-resolution lens data output including extremely accurate zoom, iris and focus data. This capability and interface promise enhanced compatibility with virtual systems for composing CG with live broadcast images.

Fujifilm will continue to tap into its optical, high precision forming and assembling technologies that have been nurtured over many years to develop and supply innovative products that address the diversifying needs of broadcasting production.Fujifilm has been engaged in the development and production of Fujinon TV&Cine  lenses for over 50 years, enabelingg exceptional image creation around the globe.

About Fujifilm in Europe
Nowadays Fujifilm entities operate in about 50 group companies in Europe and employ approximately 5,000 people engaged in R&D, manufacturing, sales, and service support. Throughout Europe they serve a range of industries including medical, chemical, graphic arts, electronic materials, optics, recording media and photographic technologies. FUJIFILM Europe GmbH (Duesseldorf, Germany) acts as Strategic Headquarters for the region and supports its group companies in Europe by formulating marketing and corporate strategies.