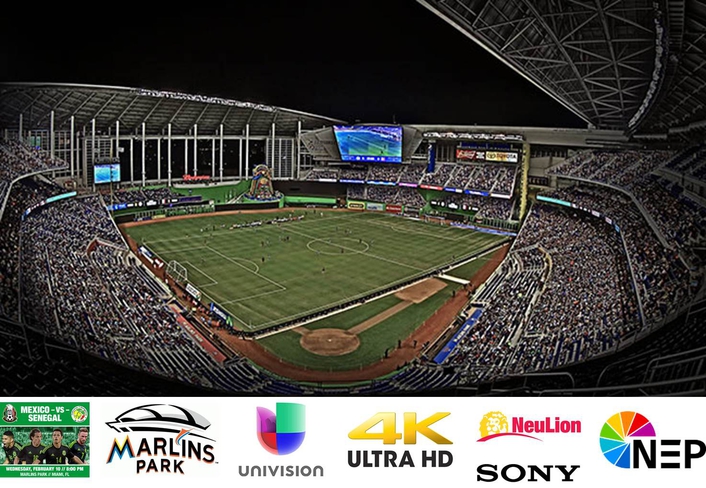 The friendly match between Mexico’s National Team and Senegal was held at Marlins Park in Miami, Florida on February 10th.

“NEP is helping to lead the way in delivering native 4K broadcasts all around the world,” said Mike Werteen, President of NEP U.S. Mobile Units. “It’s a trend that we have embraced as a company, and one that we’re well-prepared to help our clients execute.” 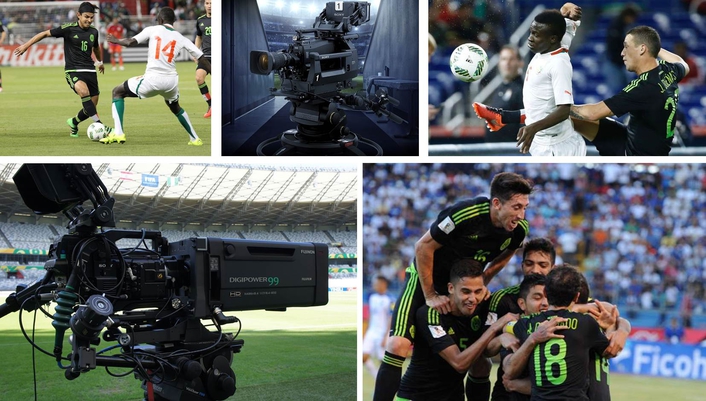 NeuLion, Inc. (TSX: NLN) offers solutions that power the highest quality digital experiences for live and on-demand content up to 4K on any device. Through its end-to-end technology platform, NeuLion enables digital content management, distribution and monetization for content owners worldwide including the NFL, NBA, World Surf League, Univision Deportes, Euroleague Basketball and others. With the recent acquisition of DivX, LLC, NeuLion also operates a robust consumer electronics licensing business that has enabled over 1 billion devices worldwide with secure, high-quality video playback, and delivers a DivX consumer software offering that has been downloaded over 1 billion times. NeuLion's customers include major sports, entertainment and global content companies as well as major consumer electronics manufacturers and software companies. NeuLion is headquartered in Plainview, NY.

‘We’re Trying To Be the Leader’: Reflections on Univision’s 4K Soccer Production

“This was more a buzz-making move to signal to the market that Univision is ready,” says Olek Loewenstein, SVP, strategy and operations, Univision Deportes. “It’s time for the distributors to say, ‘OK, now we can start creating channels.’ When will that happen? Honestly, I don’t know. But we wanted this to be a broadcaster-driven initiative and not a distributor-driven one. That, to me, is the horse riding behind the cart if they come to us looking for content to fill their channels.”

Univision partnered with NEP Broadcasting, NeuLion, and Sony to make the production and distribution possible. NEP provided a 4K mobile unit (with a Grass Valley Kayenne production switcher inside) and eight Sony HDC-4300 cameras; NeuLion supplied the encoder, the streaming SDK, and design of the app.

“In these kinds of tests, you never do it alone,” says Loewenstein. “You always reach out to partners. It was the first time 4K was done in the U.S., but it certainly won’t be the last time.”

The show offered plenty of challenges, the most obvious being cost and the availability of resources: NEP’s unit is one of only a few 4K trucks available in North America. Univision, however, took those challenges head on. Rather than supplement the HD production and create a hybrid 4K production, the network wanted to go purely 4K end to end with a complete production outfit all its own.

“We truly wanted to do a 4K production and not have anyone question whether it was real 4K or not,” Loewenstein explains. “It was completely separate — so separate that we even had a different pair of announcers call the game because the replays would be different.”

As for production challenges, he notes that both graphics and camera placement were seriously rethought. Univision did a full new design of 4K graphics and ran them off a Vizrt 4K graphics engine in the truck. Cameras — with the exception of Cameras 1 and 2, which remained in traditional locations — were positioned much lower to the field to obtain more-striking visuals.

Then there’s the distribution issue, which avoided the obvious broadcasting roadblocks and went the way of streaming. NeuLion took the 4K signal into a Neulion 4K encoder that created five profiles of the adaptive streams from 4K 60 fps at full 4K resolution down to 720p60. The signal was delivered via Akamai’s content-delivery network to NeuLion’s SDK, which Sony embedded into an app made available via the Google Play store on Sony Smart TVs.

The app is not currently available to the whole public, but the goal is to do a full rollout of a Univision Deportes-branded 4K app in the coming months.

Since its launch in spring 2012, Univision Deportes has placed its stamp of production and technology innovation on the industry. The network invested in an augmented-reality studio during the 2014 World Cup, invested in cutting-edge transmission technology via The Switch, pioneered full at-home production on nationally broadcast Major League Soccer matches, and brought live player tracking — with the help of deltatre and ChyronHego –— to last year’s MLS Cup.

This project may be the most groundbreaking of them all, and Univision is expecting more in the immediate future. Loewenstein confirms that plans are in place to produce the final of the Copa America Centenario in 4K.

“The buzz that this has generated was bigger than I would have thought,” he says. “I think people crave something new and different. The best we can do is what we started doing here. Let’s start making as much content available as we can so the audience can recognize the value. Once you have the possibility of watching in 4K vs. HD, I think most people won’t want to go back.”