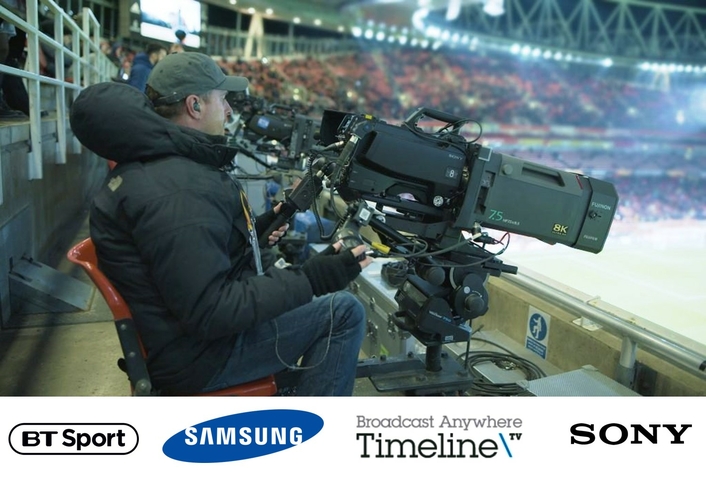 While Arsenal were busy on 28 February producing what can only be described as a 360p performance on the pitch against Olympiakos last night, a production crew was huddled together bringing the football (soccer) action to life in 8K HDR for the first time. BT Sport and Samsung partnered to produce an elaborate display of cutting-edge tech, and they promise that we’ll start to see 8K HDR streams of Premier League and Champions League matches as soon as August this year.

I got a chance to witness the UK’s first live 8K HDR sports broadcast at the Emirates Stadium in London and to look behind the scenes at exactly how it was achieved. Full disclosure: I’m an Arsenal fan, so while the game loss was what I’ve come to expect this season, the 8K HDR broadcast was far more exciting. 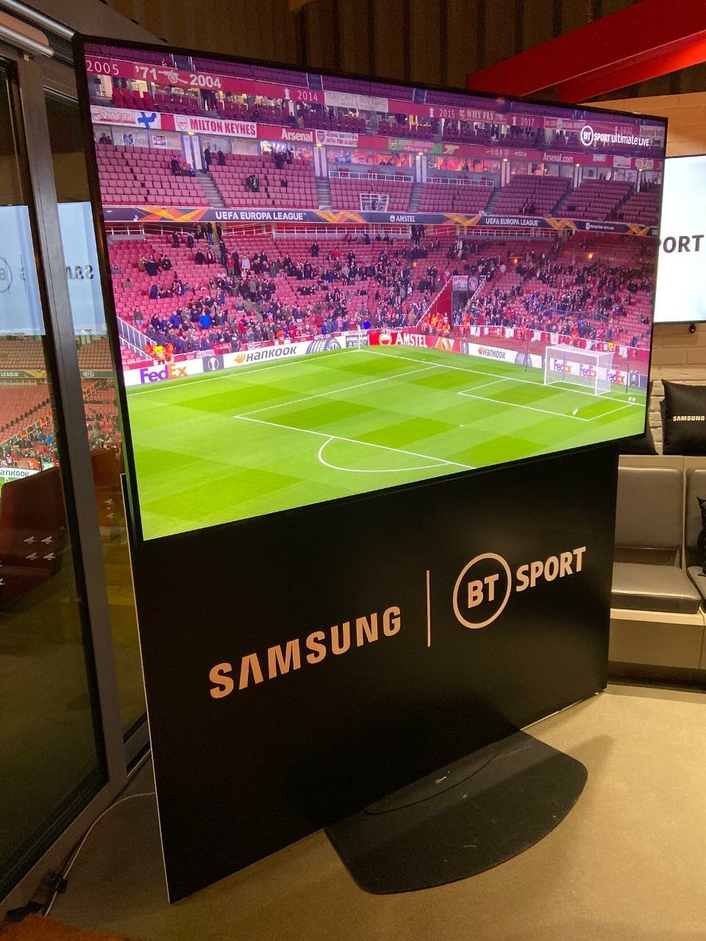 Samsung and BT Sport set up an 82-inch QLED 8K display in an Arsenal executive box that overlooked the pitch and rigged it up with an elaborate uncompressed 8K feed that totaled 48 Gbps at a 7680 × 4320 resolution in 50fps. This uncompressed feed was a sight to behold, especially as the latency was around a second from what was happening on the pitch to what was presented on the 8K TV. I could look at the TV and look outside at the pitch, and it was rather surreal to witness such a crisp digital feed of reality right next to what was happening in real time. 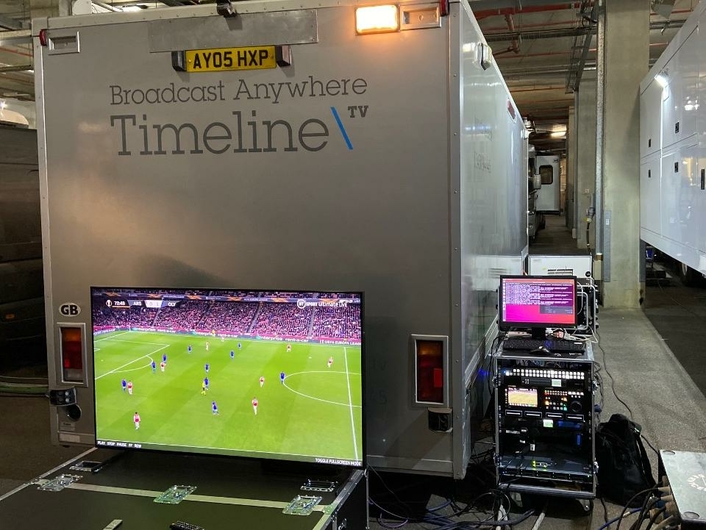 At the heart of the action is Sony’s UHC-8300 8K camera system, which retails for just shy of $500,000 and allows broadcasters like BT Sport to capture footage while simultaneously outputting it in 8K, 4K, and HD in both HDR and SDR formats. BT’s 8K HDR outside broadcast involved feeding the uncompressed footage from this Sony camera system into four serial digital interface (SDI) coaxial cables that carry 12 Gbps of bandwidth each. 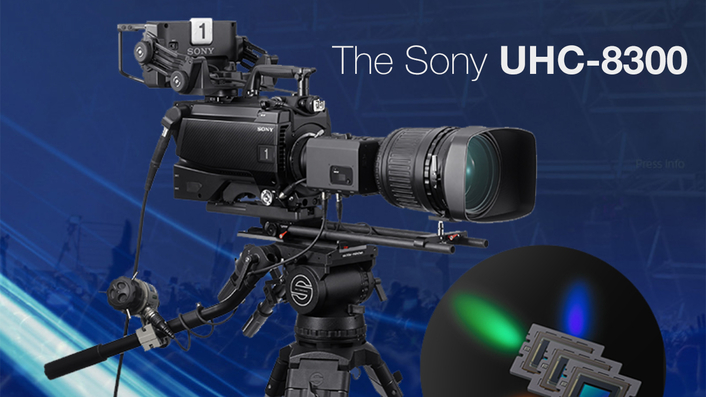 The broadcast is essentially split into four 4K feeds, each making up a quadrant of what you see on screen. These feeds were then carried from pitch level up into a box that converts them into four HDMI 2.0 links and then into yet another box that switches the signals into a single HDMI 2.1 cable that handles the 48 Gbps uncompressed feed straight into the back of the Samsung 8K TV.

It was a demonstration of the very bleeding edge of broadcasting, HDMI standards, and television panels. But this blurring of reality isn’t what you’ll get at home. BT won’t be pumping 48 Gbps streams into your living room anytime soon, and given that the average download rate in the UK is just 54 Mbps, BT is naturally compressing its 8K feeds.

I also got to witness what you’d see at home, a 70 Mbps compressed feed using the High Efficiency Video Coding (HEVC) codec and HDR10. BT Sport has been experimenting with 8K feeds between 60 Mbps and 80 Mbps, which means that anyone in the UK will really need Fiber To The Premises (FTTP) and the latest 8K TVs to take advantage of this. The end goal for any broadcaster is a much more efficient bitrate that doesn’t sacrifice picture quality. “This is an early implementation of this codec,” explains Andy Beale, chief engineer at BT Sport. “We’re thinking this could easily be down to 60 to 65 Mbps in about a year’s time.” 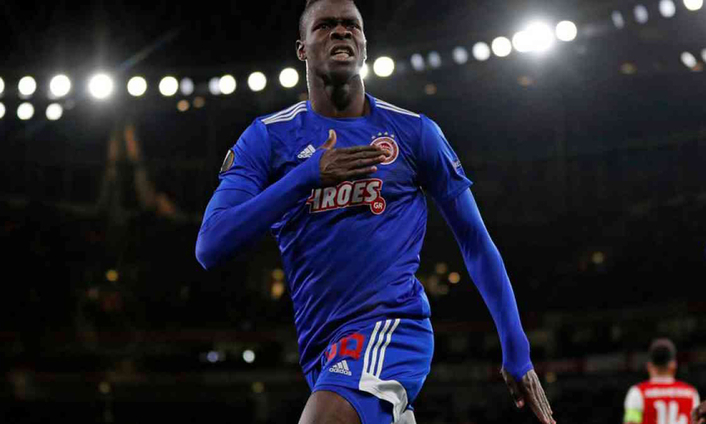 Both the 48 Gbps and 70 Mbps 8K feeds were in separate rooms, so it was difficult to directly compare the two side by side, but the differences were mostly noticeable the closer you got to the screen. It was easy to spot softness around player movement just a few inches from the screen on the compressed stream, but even tiny details like stewards’ shirt numbers were still clearly visible. Sadly, BT Sport didn’t provide a 4K HDR stream of the game to directly compare the future to what exists today. I think average consumers might not even notice the differences between compressed 4K HDR and 8K HDR footage unless they own an 80- or 90-inch TV and sit pretty close to it.

The uncompressed 48 Gbps feed looked phenomenal, and as someone who begrudgingly watches “4K” streams from Netflix at a measly 15 Mbps, I’m always more interested in watching Blu-ray copies in higher quality. That will soon change, thanks to streaming services like BT Sport that are trying to push the industry toward 8K and higher bitrates.

The only issue is you won’t always be getting 8K; BT Sport’s current 4K HDR feed includes 1080p replay and studio shots that are upscaled. The 8K footage at the game last night was only from a single 8K camera that covers the wide-angle shot of the pitch, and other angles and shots were vision mixed using 4K cameras. The novel coronavirus impact and travel concerns prevented BT from sourcing a second 8K camera from Japan for the game last night. “The plan was to have two and show two, and we were going to vision mix between the two cameras,” explains Beale. “They’re so rare these cameras that Sony won’t ship them without them being hand carried by humans.” 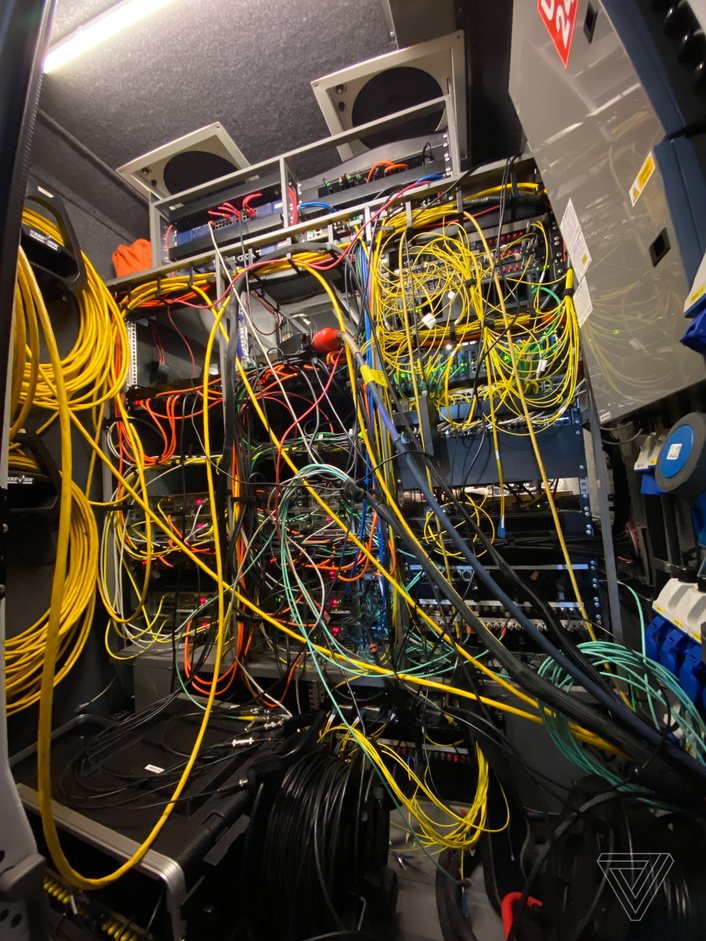 Lots and lots of cables.

Another issue to contend with in any streaming sports broadcast is latency. The BBC’s 4K HDR World Cup stream was around a minute behind a 1080i broadcast through satellite or antenna back in 2018, and BT Sport 4K HDR is usually around 20 to 30 seconds behind. I measured the latency of the raw signal coming out of the 8K HDR broadcast truck last night, hitting a distribution encoder that uploads it to Amazon Web Services (AWS) and then seeing the result on the compressed stream behind the truck that consumers will also receive in living rooms. It was around 36 seconds, which is highly impressive given the formats and round trip to the cloud that are involved.

The real test now comes for BT Sport to launch into homes later this year and push the bitrate quality beyond even the likely 80 Mbps requirement. That means investment, partnerships, and some obvious workflow changes that are being tested out right now. BT Sport has teamed up with Samsung so the native app on the company’s latest 8K TVs will support this 8K stream for the Premier League next season, and other sports like Rugby will also be broadcast in 8K.

It’s all part of significant investments that BT has already made in 4K HDR broadcasting over IP. The company only launched its Ultimate 4K HDR sports channel last year, and it’s surprising to see how quickly it’s willing and able to be at the forefront of this push toward 8K streaming just a year later.

“This isn’t a gimmick, this isn’t a throwaway,” says Jamie Hindhaugh, chief operating officer at BT Sport, in an interview with The Verge. “If we really want to deliver BT Sport Ultimate over the long term, then this is what we should do.” Hindhaugh believes that by pushing toward 8K, BT Sport will be able to improve 4K and HD broadcasts that are downscaled from this production process and still deliver a new 8K content option that drives the TV industry and sports broadcasting forward. 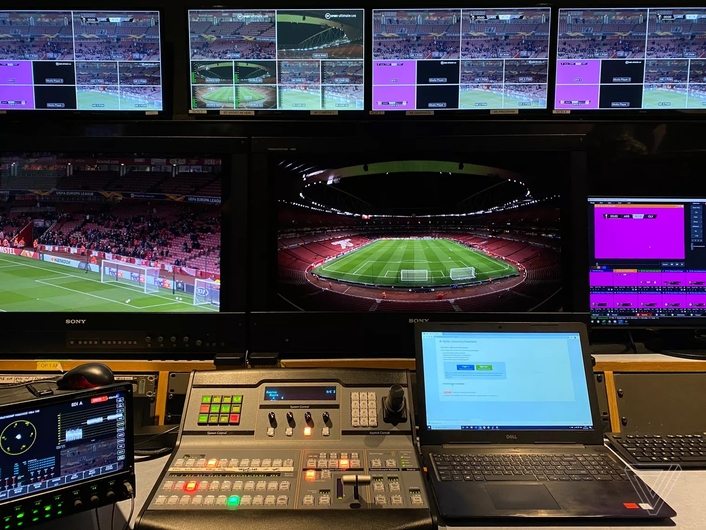 Behind the scenes of BT Sport’s 8K HDR stream.

And he’s right. Most broadcasters are still catching up to 4K and HDR content, let alone getting close to 8K footage that would even get consumers to consider such a TV. BT Sport is also looking at allowing consumers to customize the on-screen graphics they see, the audio commentary feeds, and much more. That could make streams far more personalized and even interactive in the years ahead, in ways we don’t often see across the industry right now.

Being at the forefront has allowed BT Sport to become more than just a broadcaster, too. It’s also a production house that handled Amazon’s experiment with Premier League TV rights over the holiday period in the UK. The team has even produced content for ITV Sport and the BBC’s NFL show. 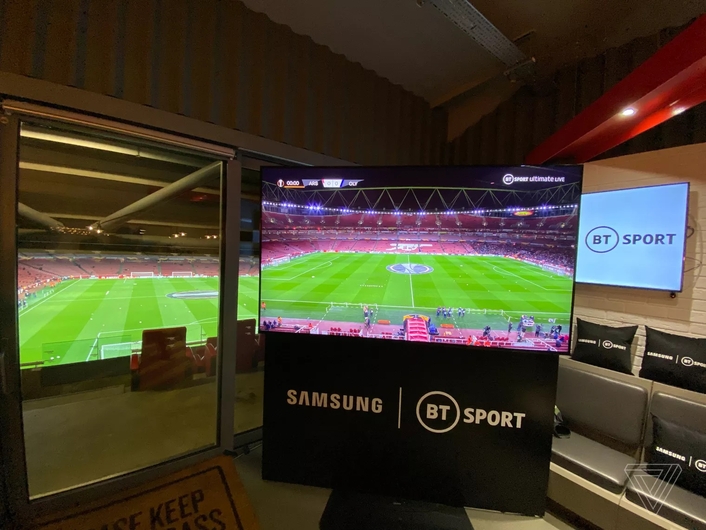 “We see ourselves as a fantastic team with fantastic expertise,” says Hindhaugh. “Our approach to the industry is about partnerships and if you’ve got the expertise then how can we support it.” Those partnerships were clear to see during this 8K HDR broadcast, with BT Sport teaming up with Fujinon for lenses, Socionext and BlackMagic Design to convert the SDI signals into HDMI, Beamr for its 8K HEVC encoder, Leader for its 8K waveform monitor, Sony with its 8K HDR camera, and Telegenic and Timeline TV for its outside broadcast.

As the team pushes toward its goal of 8K HDR streaming in August, there’s a possibility we might even see the first public stream in a matter of weeks. “Your first live experience could be the end of this season,” hints Hindhaugh. That would make the Champions League final an ideal test at the end of May. “I couldn’t possibly comment,” says Hindhaugh, before breaking out into laughter.