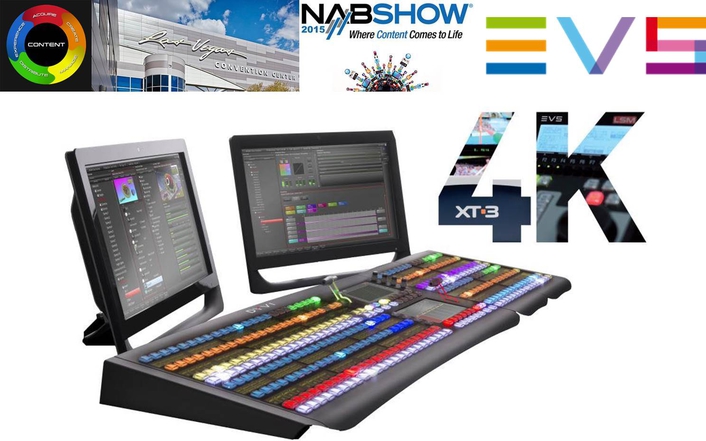 Included in the new DYVI capabilities showcased at NAB is the ability to use the production switcher functionality in 4K resolution, thanks to its non-proprietary processing architecture. This includes the latest operational additions, including full timeline control, with an unlimited number of timelines per scene with multiple tracks, offering the smoothest back-to-back recall and unique re-entry capabilities, at any resolution.

EVS is developing a single-file 4K workflow, and will be demonstrating this implementation at NAB 2015 by ingesting RED camera 4K live signals from the RED booth into the EVS DYVI IP-based production switcher.

Also new at NAB 2015 is an extension to the macro capabilities. DYVI now supports conditional macros, allowing an unlimited number of presets to be running in parallel, with multiple conditional set-ups. The RamRecorder has also been made more capable, with more clip and still channels per processing module, more supported file formats and an embedded FTP server for automated content exchange.

The EVS XT3 server is recognized as the industry reference point for live production servers, and pioneered early 4K recording and replay with a simple upgrade to its existing system. It means that the vast number of operators familiar with the LSM control panel can instantly provide 4K replays on standard hardware.

EVS is demonstrating for the first time a slick new way to interface 4K editing with the XT3 server. While the current standard I/O of QUAD HD-SDI feeds is acceptable for camera feeds, it is not ideal to exchange files this way with network-connected NLE systems.

“There is a growing surge of interest in 4K production, and our customers are looking for future-smart workflow solutions that will enable them to engage cost effectively,” said Henry Alexander, SVG, Market and Product at EVS. “Our approach, as always, is to work with those customers to find out where the practical limitations lie, and find ways to ease the bottlenecks.”

He added: “They told us, for example, that just because some productions will move to 4K origination that does not take away from the need for multiple fast turnaround edits. So we are actively developing a better way of giving the editors access to 4K files from an EVS Live acquisition model. With DYVI, we are proposing a completely new sort of production switcher, based on new paradigms. It would be foolish to come up with a radically new way of working if it could not meet the 4K requirement that so many are now demanding.”

The latest additions to DYVI, the XT3 server and the rest of the EVS production and solution range can be seen at NABShow2015 on booth SL3817.

About EVS
EVS is globally recognized as the technology leader for live video production. The company introduced Live Slow Motion replay in 1994, and has continued to build on its reputation for quality and reliability with solutions that enhance live sports, entertainment and news content. Innovations – such as the C-Cast multimedia platform and DYVI IT-based switcher – are raising the bar for live production enrichment, management and distribution. Broadcasters, rights owners, producers and venues alike use EVS to maximize the value of their productions and increase revenue streams.The company is headquartered in Belgium with offices in Europe, the Middle East, Asia and North America, and provides sales and technical support to more than 100 countries.