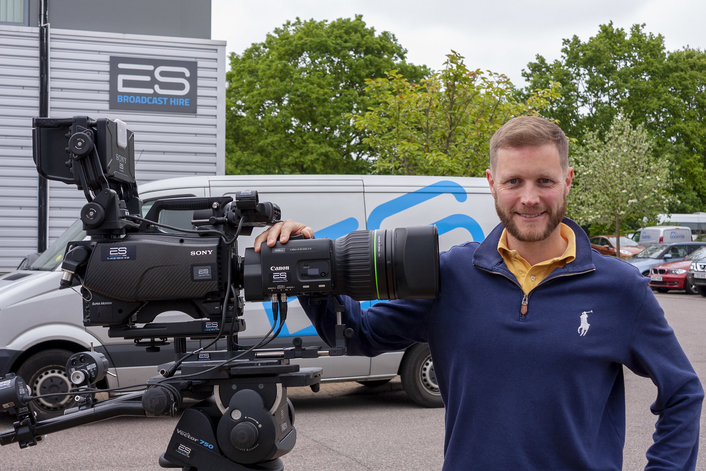 Edward Saunders, CEO of ES Broadcast, with one of the Canon CJ45ex9.7B lenses which have just arrived at ES Broadcast Hire

4K live production rental specialist ES Broadcast Hire has taken delivery of the first Canon CJ45ex9.7B 4K lenses in Europe – and the lenses will immediately be put into use at the forthcoming Monaco F1 Grand Prix, which takes place 24-27 May.

The new arrivals form the first consignment in an order of 10 lenses, which were announced by Canon last Autumn. It sees ES Broadcast Hire expand even further its 4K hire inventory – already one of the largest in Europe – to almost 170 UHD lenses, as well as close to 200 4K camera channels, including 140 Sony HDC-4300 channels.

“The CJ45 is the long-awaited missing piece in Canon’s UHD lens line-up, and our customers who are operating in 4K have been eager for their arrival for some time now,” said Warren Taggart, Managing Director of ES Broadcast Hire.

“It means that we can offer our clients a complete range of 4K Canon glass they need for their live productions, including CJ12, CJ20, CJ45, UJ27, UJ86 and UJ90 lenses.

“The portability and wide focal range of the CJ45, combined with Canon’s outstanding optical performance, make it a perfect ‘commuting’ lens that will be ideal for golf and a wide range of live sports productions.”

The CJ45ex9.7B is a direct 4K replacement for its HD predecessor, the popular HJ40x10B, and offers an expanded focal range of 9.7-437mm (up to 874mm when the lens’ built-in 2x extender is used). The lenses are available for rental from ES Broadcast Hire immediately. Interested parties should call +44 (0)1923 811 520, visit esbroadcasthire.com or email bookings@esbroadcasthire.com