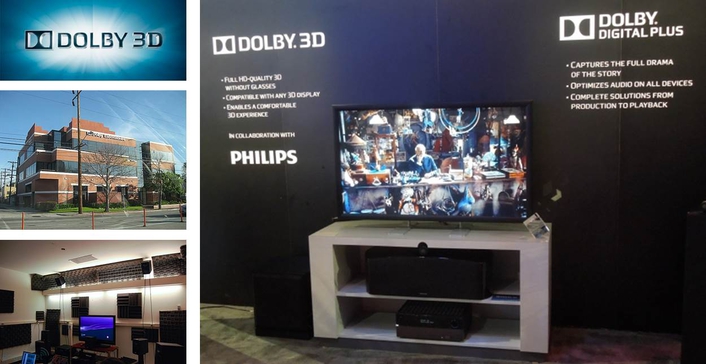 .
Dolby Laboratories EV/CFO Lewis Chew has told analysts that his company was sitting on $958 million in cash and cash equivalents despite spending $11.7 million during the quarter-year to September 30th in buying in its own stock back in for cancellation.

These days Dolby Labs is mostly a licensing operation for its audio, cinema and broadcasting technologies, not least its Surround Sound and noise reduction technologies. During the quarter total company revenue was $231.3 million, and within that, licensing revenue was $205.7 million, which was up by $14.6 million sequentially from Q4 and up slightly from the $204.9 million of licensing revenue in last year’s first quarter.

Dolby said that nine TV manufacturers, including Sharp, showcased Dolby’s ‘glasses free’ 3D solution at CES in Las Vegas two weeks ago, and that Dolby expected to see TVs shipping with the technology by the end of this year.

Dolby also explained the progress being made in Dolby Vision, unveiled two weeks ago at CES in Las Vegas. Dolby Vision, says the company, is an end-to-end video technology that offers more realistic, subtle distinctions in colour and brighter highlights while also delivering improved shadow details. It focuses on the quality of image each pixel represents and is not dependent on the number of pixels. This means that 2K and 4K displays can each be significantly enhanced.

Broadcast represented the largest segment (36 per cent) in Dolby’s income portfolio, with PC revenue (21 per cent) and Consumer Electronics (19 per cent) with mobile devices (15 per cent) also working well. The remaining 9 per cent came from gaming and automotive.

CEO Kevin Yeaman told analysts that he expected the next major product to be UltraViolet, and that Dolby’s Digital Plus technology had been accepted by “nearly all” of the Hollywood studios.  He explained that in the broadcast sector the company y was making further progress in China and India. “In both countries, we’ve seen growth in the number of high-definition channels on-air. Currently, 52 of the 86 HD channels in China and 18 of the 32 HD channels in India use the Dolby audio format. Additionally, UCN, the largest digital network in central India, is now on-air in Dolby. This marks the first cable operator in India to go on-air with Dolby Digital Plus. As India is in the early stages of converting, our previous on-air wins have been with satellite providers like Airtel and broadcasters like Star TV network.”